Vedanta, literally translating:  Ved= 4 Vedas (Rigveda, Yajurveda, Samaveda, and Atharvaveda) and Anta = end of or pinnacle of. Thus, meaning end or absence of the knowledge. Vedanta is the way of life, more specifically the spiritual life. 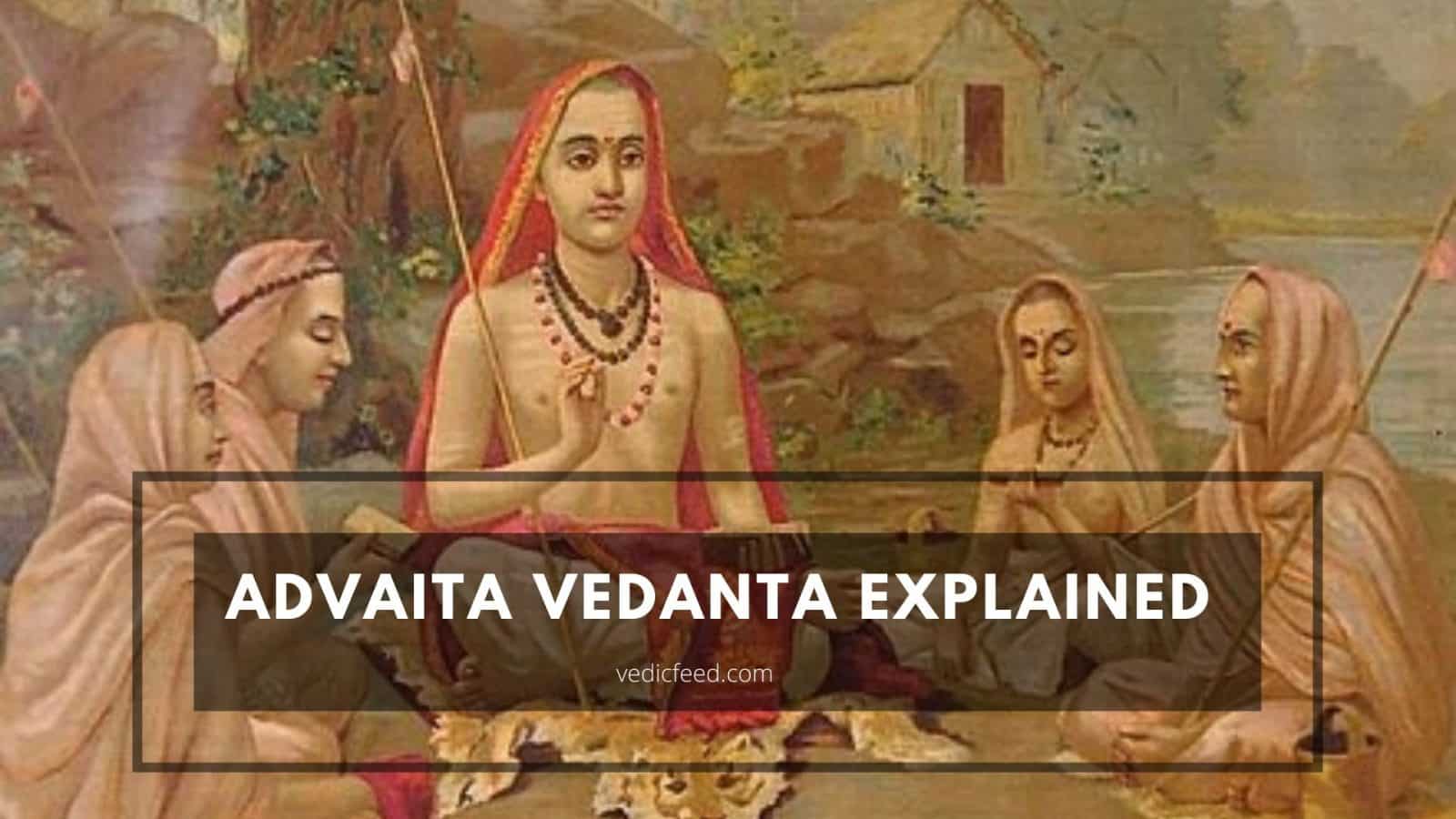 Advaita Vedanta is the non-dualistic school of thought that believes only one truth that is Brahman. Here the Brahman goes beyond the god or the creator. “I am The Universe and, The Universe resides within me” is the ultimate truth. This one is all the gods, demons, places, times, and everything that exists. This one is I, You and Them. This belief is derived from Upanishads.

Advaita symbolizes the highest point of the spiritual manifestation one can attend. Vedanta is the solution to the problem of human suffering. To be more clear, suffering arises as a reaction to physical or emotional pain.

The ātmā or ātmān (individual consciousness) inside you is the true source of happiness. Adi Shankaracharya says, “ātmā is your true nature, that makes you complete.” This inner reality is usually shielded by the outer world’s components (people, events, things). Here outer mask covers the godly reality hidden within the self.

The desires we possess and try vigorously to fulfill them, will it give contentment? Not exactly! The more desires we fulfill, the more tired we get.

So, the true source of happiness lies within you. Thus, there is no reality beyond the self, and this self can be realized through the teachings of the Advaita Vedanta.

Satchitananda = Nature of Atman or Self

Sat, Chit, and Ananda are the true nature of Atman. Sat is the knowingness of the consciousness, the desire to know, the ability to know, and you already know. Chit is the aliveness, the prana in you. The intensity of life is experienced based on the chit. Ananda is the pleasantness and bliss that exists within Atma.

Distinguishing seer from seen is one of the difficulties in Advaita. To get out of this ability is the nature of the self. As the sun doesn’t get affected in any way whatsoever, it shines upon, likewise the consciousness that light upon the activities of the mind does not truly affect the activities of Vritti that it illumines.

The misinterpretation of the experience of happiness or sadness that arises in our mind is the obstacle to the self. According to the philosophy of Advaita Vedanta, the Vrittis (perceptions, cognitions, and emotions) that arise in your mind don’t truly affect the true self.

What is the hindrance behind the attainment of self? Adi Shankaracharya beautifully explains it; Ignorance and Maya (illusion). Ignorance is giving importance to the outer world and avoiding the inner world (Atman). When a person starts giving more attention to people, situations, and things, he forgets his true nature and gets stuck in the loophole of ignorance.

Maya is the thought process that makes individuals stick with the Iness. The feeling of me, my family, my friends, my life, my objects, these kinds of material thoughts, creates an illusion in mind in the attainment of self. Thus, to avoid oneself from the cycles of Maya, one-pointed attention to the inner environment (Atma) is the only solution. (Recommended – Who is Maha Maya?)

The philosophy of Advaita Vedanta, the wisdom that has been passed by different sages like Gaudapada, Shankaracharya, and many more, revolves around the only truth, i.e., Brahman. Advaita is considered to be the most profound teachings among all schools of thought.

The consciousness is utterly untouched by any suffering or worldly misery. Trying to determine the difference between pain and suffering is one small step towards Advaita Vedanta.

Starting with Jagrat Avastha (waking state), Swapna Avastha (dreaming state), Sushupti Avastha (sleep state), and finally overcoming all three states and reaching Turiya Avastha(deep meditative state) is the essence of who you are. Therefore, Advaita Vedanta is all about Jivatma (individual consciousness) is no different from the Paramatma (collective consciousness.)

6 Famous Scientists who were Influenced by Hindu Dharma

Mahamaya – The Illusory Power of Brahman