Located 12km east of Kathmandu, the capital of Nepal, Changu Narayan temple is the oldest temple in Nepali history. The temple is also known as just ‘Changu’ or ‘Dolagiri’ and is dedicated to Lord Vishnu. This Vishnu temple gathers important histories and religious values.

Contents show
The legend
The History of Changu Narayan temple
The Architecture
The Museum
The Ethnographic Museum
The Festivals, Fairs
The Preservation

There are two legends surrounding the Changu Narayan temple. Let’s talk about the first one.

There used to be a cow herder, known as Gwala during the time, who bought a cow from a Brahmin in ancient times. The Gwala took the cow to Changu for grazing, and the cow could produce large quantities of milk. Changu then was a forest filled with Champak trees.

One day, that cow only went to one tree in particular for grazing. That evening, the cow produced a very small amount of milk, which continued for several days. The Gwala could do nothing about it, so he called Sudarshan, the Brahmin he bought the cow from.

Gwala and Sudarshan observed the cow’s activities when they took her to graze in the forest. They were surprised when they saw a small black boy coming out of the tree and drinking the milk from the cow. They thought the boy was a devil, so they decided to cut down the champak tree. Astonishingly, human blood started flooding out of the tree. Both of them got worried, thinking they committed a crime in cutting the tree. When they were crying, Lord Vishnu emerged and told them that it was not their wrongdoing.

Lord Vishnu mentioned that he had committed a great crime when he unintentionally killed Sudarshan’s father while hunting in the forest. Lord Vishnu was then cursed to wander the earth on his mouth. As Garuda, he eventually descended on the hill at Changu. Nobody knew he was there, and there was no way he could free himself of the curse. He survived on the milk of a stolen cow. When they cut down the tree, they freed him from the sin as he was beheaded.

Hearing this, Sudarshan and the Gwala started to worship the spot and established a Vishnu temple there. Since then, the site is considered to be sacred. The priests in the temple are the descendants of Sudarshan.

Another legend has it that there used to be a mighty warrior named Pranjal (and is said to still live today). He was considered the strongest person in the entire country until Changu challenged him and defeated him. As a tribute to him, people constructed a temple in his name.

The History of Changu Narayan temple

However, the recorded history has it that the temple was built by Licchavi King Haridatta Varma around 4th Century C.E. It was then rebuilt in 1702 after a major arsenic disaster. Since then, it has undergone many reconstructions over the year.

It is rich with embossed works and is the fine artistry of Newars. Their meticulous artwork can be seen in different forms – stone, wood, metal craft – around the temple. It is a two-story roofed temple that stands on a high plinth of stone.

Professor Madhan Rimal (Department of Sociology and Anthropology, Tribhuvan University) says that the temple belongs to neither Shikhara Style nor the Pagoda style and should be described as a typical, traditional Nepali style temple built by Newars.

There are four gates from where people can enter the temple, each guarded by life-sized sculptures of animals such as lions, sarabhas, graffins, elephants on each side. There are also struts where ten incarnations of Lord Vishnu are carved, and there are doors where Nagas (snakes) are carved. On the western entrance gate, which is also the main gate, there are Chakra, Sankha, Kamal, and Khadga at the top of stone pillars where inscriptions are carved in Sanskrit.

These inscriptions at Changu Narayan Temple are considered to be the oldest in all Nepal and are said to be erected by then Lichhavi King Manadeva around 464 A.D. 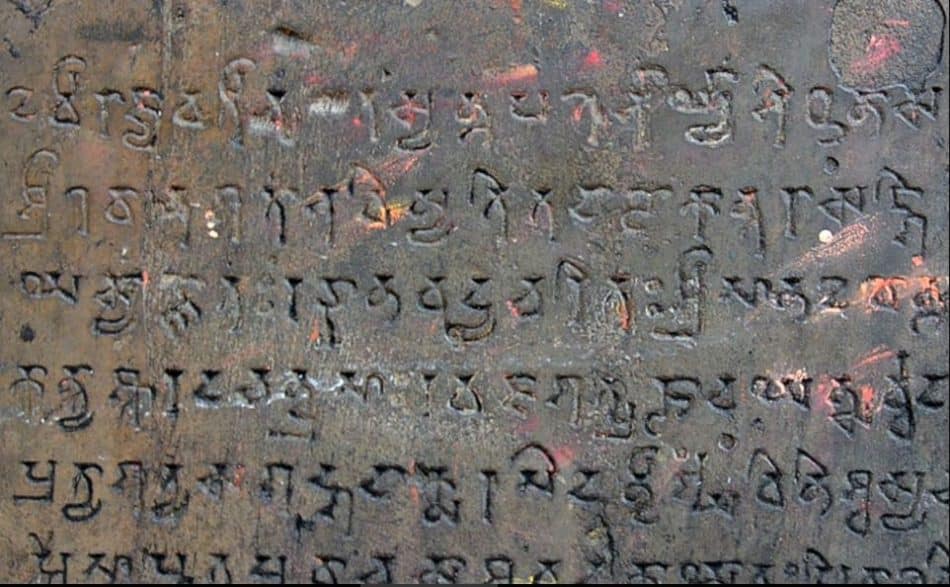 Smaller statues of King Bhupatindra Malla and his queen rests on the main entrance too. 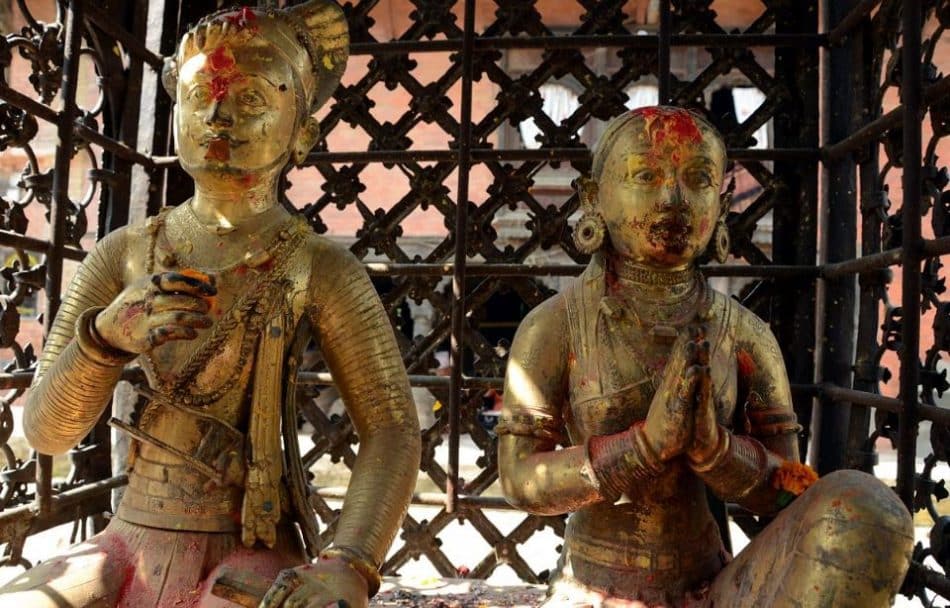 Lord Vishnu is the epicenter of this temple. Visitors can also see Garuda (half-man, half-bird; also the vehicle of Vishnu) kneeling in front of the main gate.

A statue of Narasingha (half-man, half-lion; and also an incarnation of Vishnu) rests in the temple courtyard.

Another one shows Vishnu as Vikrantha/Vamana, a six-armed dwarf who later transformed into a giant. 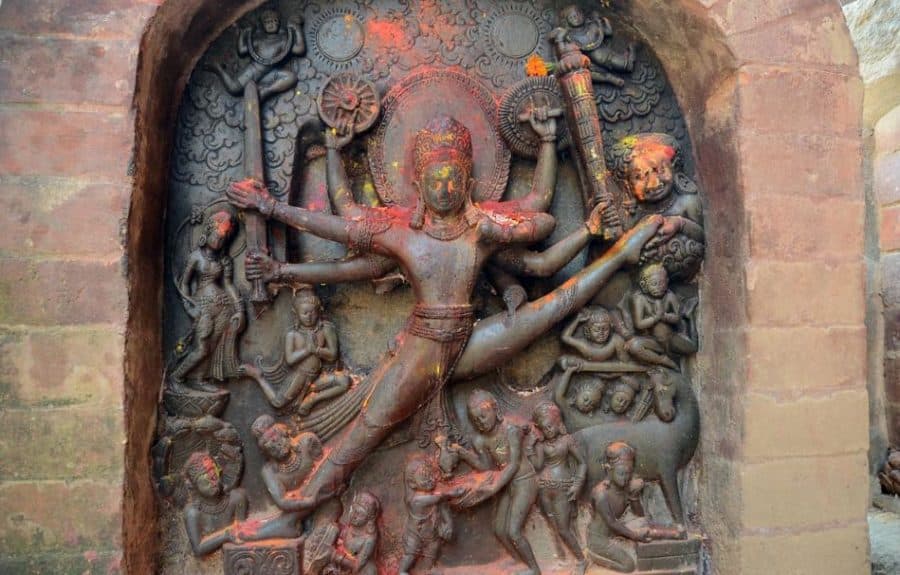 There is a beautifully carved, 1500-year old image of 10-headed, 10-armed Vishnu on a small black slab. 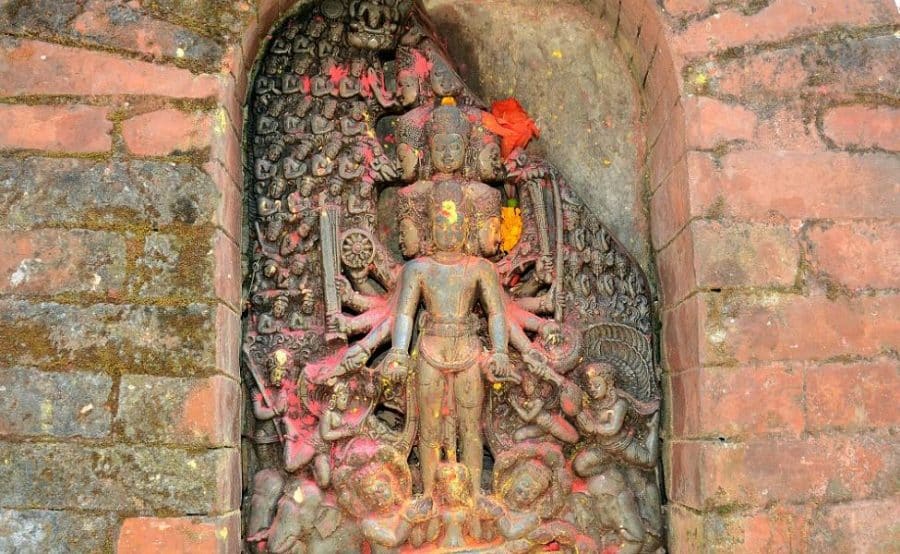 Though the Changu Narayan temple is dedicated to Lord Vishnu, we can also see statues and shrines of other gods, including Shiva, Ashta Matrika, Krishna, inside the temple. 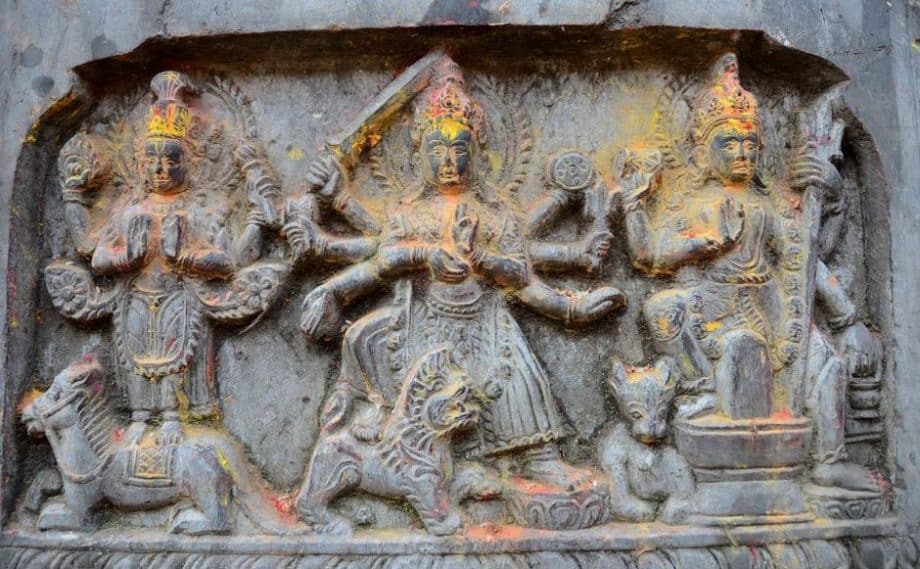 On the way to the temple, there is a private museum. The museum holds a plethora of ancient coin collections, tools, arts, and architecture. There are also ancient tools that were used by Newars during the ancient period. It is said to be the first private museum in Nepal.

Inside the temple area, there is an ethnographic museum that has collections of objects and photographs collected by Judith Davis.

The temple is also home to many festivals. The main one is the Changu Narayan Jatra. Other festivals like Mahashanan, Jugadi Nawami, Haribodhini Ekadashi are conducted here. However, special poojas like marriage, birthdays, upanayana are not conducted here.

The temple was listed as UNESCO World Heritage Site in 1979. Changu Narayan VDC, along with the Management Committee, Department of Archeology, and Palace Management Office, Bhaktapur, Nepal, has been working to preserve the religious site.

Guhyeshwari Temple – A Must Visit Shakti Peetha in Nepal