Hindu Dharma is home to many mystical creatures each bestowed with their own existence purpose and role in cosmic harmony. The Gandharvas are often associated with music while the Apsaras are known for their beauty which often plays the catalyst in bringing down a deeply meditating guru or a Rakshasa (demon). They are portrayed as semi-divine beings; who do not seem to be able to curse humans (except on one occasion) or grant them boons as gods can, but we do see them as adept in magic and knowledgeable in all of the 64 performing arts; additionally, we see many Gandharvas skilled in warfare.

Origins of the Gandharvas

Often looked upon as the choristers in Indra’s heaven, the Gandharvas were the descendants of Kashyapa and his wife Arishta. According to the Vishnu Purāna, they were sons of Lord Brahma.

.”The Gandharvas were next born, imbibing melody; drinking of the goddess of speech, they were born, and hence their appellation. (gām dhanyatha, ‘drinking speech’).”

The Padma Purāna speaks of them as the children of Vach.

Gandharva’s as mentioned in Vedas

The Gandharvas are often seen as companions to the apsaras. They are handsome, possess brilliant weapons, and wear fragrant clothes. They guard the Soma but do not have the right to drink it. How they lost this right has a story: in one version, the Gandharvas failed to guard the Soma properly, resulting in it being stolen. Indra brought back the Soma and, as a punishment for their dereliction of duty, the Gandharvas were excluded from the Soma-draught. In another version, the Gandharvas were the original owners of the Soma. They sold it to the gods in exchange for a goddess – the goddess Vach (speech) – because they are very fond of female company.

A Brief introduction to Soma

Soma was perceived to be the drink of the gods, an elixir consumed by the Hindu gods and their ancient priests, the Brahmanas, during rituals. Its properties included an ability to heal illness but it was also thought to have brought great riches. Soma is personified by the god of the same name who is also the god of sacrifices and who may, in some texts, be associated with the Moon. The drink is famously described and praised in a Mandala of the sacred Vedic text, the Rigveda.

In Hindu scripts, the gods gained their immortality by drinking Soma and it was the favorite tipple of the great god Indra. They then gave the drink to the archer-god Gandharva for safe-keeping but one day Agni, the fire-god, stole it and gave it to the human race. Not only drunk by priests for its sacred nature it was also credited with uplifting qualities, giving the drinker a boost in energy and alertness. These effects meant that the drink has been considered divine since ancient times; a beverage which brought humans closer to divinity.

Goddess Saraswati, her Veena and the song of the Gandharva 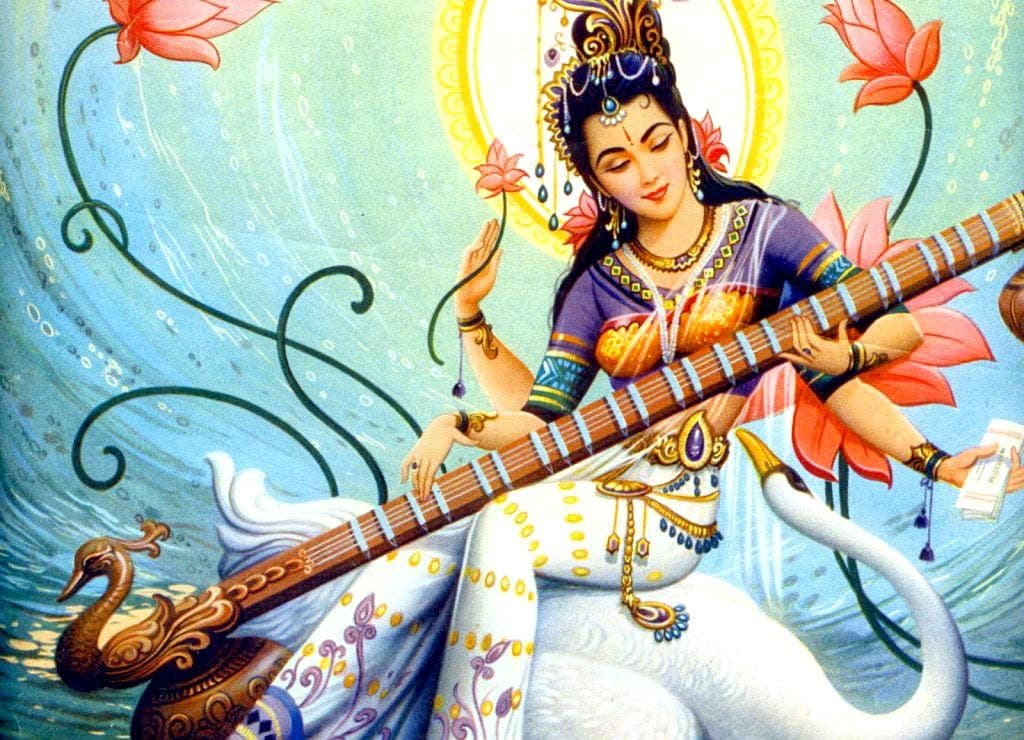 The theft of the Soma infuriated all the gods yet they couldn’t do anything as the Gandharvas were their allies. All the Gods turned to Goddess Saraswati for her wisdom. Saraswati promised to recover the soma plant.

The goddess disguised herself as a young maiden. She carried with her only one weapon — her veena. She then set off for the land where the Gandharvas lived. Upon reaching there, she found a spot in a beautiful garden, where she sat and began playing lovely music on her veena creating enchanting tunes: the Ragas and the Raginis.

Melodious notes filled the air. It was unlike anything the Gandharvas had heard. They were drawn to the place as if in a trance. Soon, all the Gandharvas surrounded her while she continued playing. Then suddenly, she stopped playing. The Gandharvas felt disappointed that the music had stopped. Vishvavasu looked in distress at the beautiful girl and said,

“Why did you stop?

“Only if you give back the Soma plant to the devas,” said the goddess Saraswati.

The Gandharvas then ashamed of their actions returned the Soma plant and learned how to play music from Saraswati. In time they became celestial musicians whose melodies had more power to rouse the mind than any intoxicant.

When Arjuna, the Pandava, went to the heavens in search of celestial weapons, the Gandharvas at Indra’s court taught him singing and dancing. The Gandharvas are good warriors as well. The Kuru prince and heir apparent, Chitrangad, was killed in a battle by a Gandharva of the same name. Another Gandharva gave an enchanted war chariot and some divine weapons to Arjuna, and on another occasion, imprisoned Duryodhana and his whole pleasure camp when the two groups entered into a dispute over the rights to a picnic spot.

The earliest mention of apsaras is as river nymphs, and companions to the Gandharvas. They are also seen to live on trees, such as the banyan and the sacred fig, and are entreated to bless wedding processions. Apsaras dance, sing, and play around. They are exceedingly beautiful, and because they can cause mental derangement, they are beings who are to be feared. They have been beautifully depicted in sculpture and painting in India and throughout areas of South and Southeast Asia influenced by Hinduism and Buddhism.

Origins of the Apsaras

It is believed that the origin of the apsaras, as told by the Institutes of Manu, are said to be the creations of the Seven Manus, the progenitors of mankind. In the Epic poems more is said about them—the Rāmāyana attributing their origin to the churning of the ocean, and with this, the Purānic account of their origin agrees. It is said that when they rose from the waters neither gods nor asuras would wed them, so they became the common property of both classes.

Famous Apsaras and their role in the History

The Purānas mention various ganas or classes of them the Vāyu Purāna enumerates fourteen, the Hari Vansa- seven. They are again divided, as being daivika, ‘divine,’ or laukika, ‘worldly.’ The former are said to be ten in number, and the latter thirty-four, and these are the heavenly charmers who fascinated heroes as Urvasi, allured austere sages from their devotions and penances as Menekā and Rembhā and Tilotama.

The Rig Veda mentions one apsara by name; she is Urvasi, wife to Pururava, who is an ancestor of the Kauravas and Pandavas. The story is that Urvasi lived with Pururava, a human king, for a while and then left him to return to her apsara and Gandharva companions. The distraught Pururava, while wandering around in a forest, spotted Urvasi playing in a river with her friends, and begged her to return to the palace with him. She refused.

I have moved on from you like the first rays of dawn. Go home, Pururava; I am as hard to catch as the wind. Female friendship does not exist; their hearts are the hearts of jackals.

In Jamini Mahabharat, there is another story of Urvashi, when she insulted Rishi Durvasa. Rishi Durvasa cursed her to become a mare. When she pleaded for forgiveness, Rishi reduced the curse such that she will become mare only in the daytime, and in the night she will regain her apsara form and will be only able to be in full form throughout the day only when 3 and a half vajras come together. Then a series of events occur after which she was relieved of the curse.

Once Arjuna had visited heaven along with his Gandharva friend. He watches the performance of Urvashi. Later Indra asked Urvashi to spend some leisure time with Arjuna. But when she tried to lure him, he denied the proposal saying that she was the wife of one of his ancestor Pururva, so he respected her and can’t accept her proposal. Furious Urvashi cursed Arjuna that since he had not behaved in a manly way with her, therefore, he will have to live as a female. It was because of this curse that Arjuna had to later act as a female called ‘Bhrehenala’ in the last one year exile when they have to be hidden in disguise. This story is present in Mahabharata.

Rambha is known as the Queen of the Apsaras. Her accomplishments in the arts of dancing, music, and beauty was unrivaled. She was often asked by the king of the Devas, Indra to break the Tapasya of sages so that the purity of their penance is tested against temptation, and also that the order of the three worlds remains undisturbed by any one man’s mystical powers. When she tried to disturb the penance of Rishi Vishwamitra (who was meditating to become a Brahmarishi), she is cursed by him to become a rock for 10,000 years till a Brahmin delivers her from the curse.

In the epic Ramayana, Rambha is violated by Ravana, king of Lanka, who is thereby cursed by Brahma that if he violates another woman again, his head will burst. This curse protects the chastity of Sita, the wife of Lord Rama when she is kidnapped by Ravana.

Rambha is the wife of Nalakuvara, the son of Kubera. By some accounts, it is he who cursed Ravana.

She was one of the most beautiful apsaras in the world with quick intelligence and intent talent but a desired for a family. Vishwamitra one of the most respected and revered sages in ancient India frightened the gods and even tried to create another heaven. Lord Indra, frightened by his powers, sent Menaka from to lure him and break his meditation. Menaka successfully incited Vishwamitra’s lust and passion when he saw her beauty.

She succeeded in breaking the meditation of Vishwamitra. However, she fell in genuine love with him and a baby was born to them who later grew in Sage Kanva’s ashram and came to be called Shakuntala. Later Shakuntala falls in love with King Dushyanta and gives birth to a child called Bharata after whom India was first named. When Vishwamitra realized that he had been tricked by Indra, he was enraged. But he merely cursed Menaka to be separated from him forever, for he loved her as well and knew that she had lost all devious intentions towards him long ago.

The tale states Sunda and Upasunda were sons of the asura (demon) Nikumbha. They are described as inseparable siblings who shared everything: the kingdom, the bed, food, house, seat. Once, the brothers practiced severe austerities on the Vindhya mountains, compelling the creator-god Brahma to grant them a boon. They asked for great power and immortality, but the latter was denied, instead, Brahma gave them the boon that nothing but they themselves can hurt each other. Soon, the demons attacked heaven and drove the gods out. Conquering the whole universe, the demons started harassing sages and creating havoc in the universe 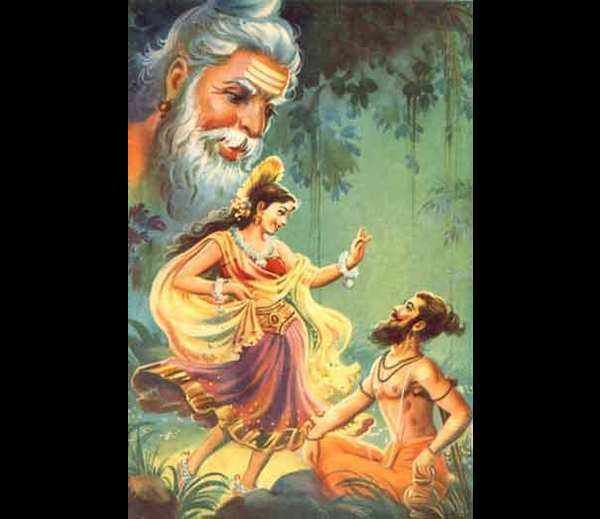 Brahma then ordered the divine architect Vishvakarma to create a beautiful woman. Vishvakarma collected all that was beautiful from the three worlds (heaven, earth, underworld) and all the gems of the world and created an alluring woman – with unrivaled beauty – Tilottama and directed her to seduce the demon brothers to the extent that she would become an issue of contention between them.

As Sunda and Upasunda were enjoying a dalliance with women and engrossed in drinking liquor along a riverbank in the Vindhya mountains, Tilottama appeared there plucking flowers. Bewitched by her voluptuous figure and drunk with power and liquor, Sunda and Upasunda took hold of Tilottama right and left hands respectively. As both of the brothers argued that Tilottama should be his own wife, they grabbed their clubs and attacked each other, ultimately killing each other. The gods congratulated her and Brahma granted her the right to roam freely in the universe as a boon.

Vedic Influence in Muslim countries like Iraq and Iran

Hindu Gods to Worship on Different Days Through The Week

Kama Deva and Rati – The Hindu God of Love and Lust