The Hindu population in Indonesia is divided into three groups: Indians, Balinese, and Javanese. As a result, their temples and methods of worship differ from one another.

The Candi-style temple is based on the Vedic Vastu Shastra and has an open-air worship spot surrounded by walls with complexly designed gates. Another type, the Koil temple, follows the Tamil or Dravidian style and is typically found in South India.

It is a Pura temple on the slope of Mt. Agung, Bali, Indonesia. It is the largest and the holiest Balinese Hindu temple that dates 2,000 years old and represents the Hindu Trinity gods (Lord Shiva, Lord Vishnu, and Lord Brahma).

Pura Besakih became the main temple for various Balinese dynasties for worship. The complex of Besakih has 23 temples that stand up parallel. Moreover, the main attraction of the temple is Pura Penataran Agung. It is a structure that mimics the Hindu sacred mountain, Meru – home to all Hindu gods.

Throughout the year, almost seventy festivals take place. So, visiting this holy site during the festival season adds extra adventure to tourists.

Also known as the bat cave temple, Goa Lawah is among the six sacred places in the world and Bali. It is one of the most scenic cave temples in Indonesia.

This 15-century Balinese Hindu temple is built over a hill around a bat cave in Pesinggahan village, Klungkung, Bali, Indonesia, by one of the earliest Hindu priests in Bali, Mpu Kuturan. The architectural design of the temple includes three chambers. The outer chamber or entrance of the cave has three pavilions.

On one of the pavilions, a musical performance takes place. The inner section consists of three Pelinggih Meru, one dedicated to the Hindu god Lord Shiva. As per locals, visiting a temple in the morning is the best as the temperature is cool.

Prambanan temple is the largest Hindu temple on the island of Indonesia in Yogyakarta between Central Java and Yogyakarta state. This 9th-century sanctum is among the UNESCO Heritages sites list, which honors Hindu Trinity Gods – Brahma, Vishnu, and Shiva.

Pura Luhur Uluwatu is a Balinese Hindu temple built on the edge of a cliff above the sea at Uluwatu. This temple honors Lord Rudra (one of the forms of Lord Shiva) in the form of Sang Hyang Widhi Wasa.

Visitors must know monkeys who steal things when entering the temple’s area. Besides that, a Kecak dance performance foretells the story of the epic Ramayana at 6 pm. So, enjoying the traditional dance with a sunset in the background can be a memorable experience.

This Balinese Hindu temple is among the Pura Kahyangan Jagat. It locates in Batur village, on the feet of the active volcano Mt. Batur. It is one of the most important holy sites in Bali, which symbolizes harmony and balance of the entire Island of Indonesia. The temple is dedicated to Lord Vishnu and the domestic goddess of lakes and rivers, Dewi Danu.

Inside the temple compound, there are nine temples. Among them, Pura Ulun Danu Batur is the main one with five courtyards. Inside the courtyards are 11-layer Meru structures and three smaller Meru, each of which honors a specific person, gods, and mountain.

Every smaller temple represents some particular gods of Balinese Hinduism, reflecting some visuals of Balinese culture and traditions. Therefore, visiting the Pura Ulun Danu Batur temple can provide visitors to learn more about Balinese culture. In addition, on the 10th full moon of the year, the temple hosts Odalan – a major feast festival between late March and early April.

It is the oldest Hindu temple in Medan, the capital city of the province of Sumatra. Built in 1884, this temple resides in the Kampung Madras – the small India of Indonesia.

The central deity of Sri Mariamman Temple is Goddess Mariamman, the Hindu deity of rain. Besides, Lord Ganesha and Murugan are also worshipped here. The temple follows the south Indian Hindu temple architectural design with an entrance gate decorated with gopura.

This Elephant Cave temple was included in the UNESCO World Heritage in 1995 but was later removed in 2015. This 9th-century temple resides in Bedulu village, 6 km from Ubud, Bali, Indonesia.

Inside the temple compound, you can find a statue of Lord Ganesha at the left entrance and Shiva Lingam at the right entrance hall. This archeological Hindu sanctuary possesses artistic carved images and figures of Hindu gods.

It is a Hindu complex comprising five temple groups, built on Mt. Ungaran around 1270 m above sea level. This temple dates back to the 8th or 9th century and resides at Semarang, Central Java, Indonesia. The nine temples inside the Candi Gedong Songo complex are dedicated to Lord Shiva and Goddess Parvati.

Besides enjoying the artistic temples, visitors can enjoy panoramic views of nearby hills and green forests. For horse lovers, one can hire a horse to explore the entire temple compound.

Also known as the Ubud water palace, this temple is dedicated to the Goddess Saraswati. Built in the year 1951, this temple resides in Ubud, Bali. To honor the goddess of wisdom, art, and speech, the prince of Ubud ordered the great sculptor and architect, I Gusti Nyoman Lempad, to design this masterpiece structure.

Visitors can enjoy grandeur water gardens, lotus pools, and ancient Balinese sculptures inside the temple compound. Tourists can also enjoy the Kecak dance every Tuesday and Thursday. So, plan your visit these days to learn and experience Balinese culture.

One of the most romantic, picturesque, and natural on the island of Indonesia is Tanah Lot. In the Balinese language, Tanah lot means land on the sea, which completely suits a rock formation offshore. It is a resident of one of the seven sea temples dedicated to the Lord Varuna – the water deity.

Pura Tanah Lot temple resides above the rock, and its references can be found in Balinese mythology. Thus, due to its calming and scenic atmosphere, Tanah Lot is one of the must-visit places in Bali, Indonesia. 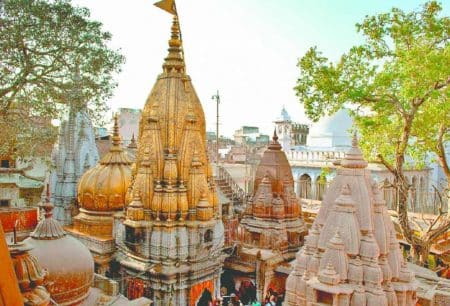