Throughout history, people have seen the greatest sages, saints, and poets of ancient India. One of the names that stood out the most is Maharishi Valmiki. In Sanskrit literature, Rishi Valmiki is considered Adi Kavi – the first poet. He is the original author of the epic Ramayana, one of the most popular Hindu scriptures.

Rishi Valmiki was a great sage of purity, kindness, mercy, poetry, wisdom, and a philosophical genius. British satirist Aubrey Menen states sage Valmiki as the first author in history who came out with his artwork. 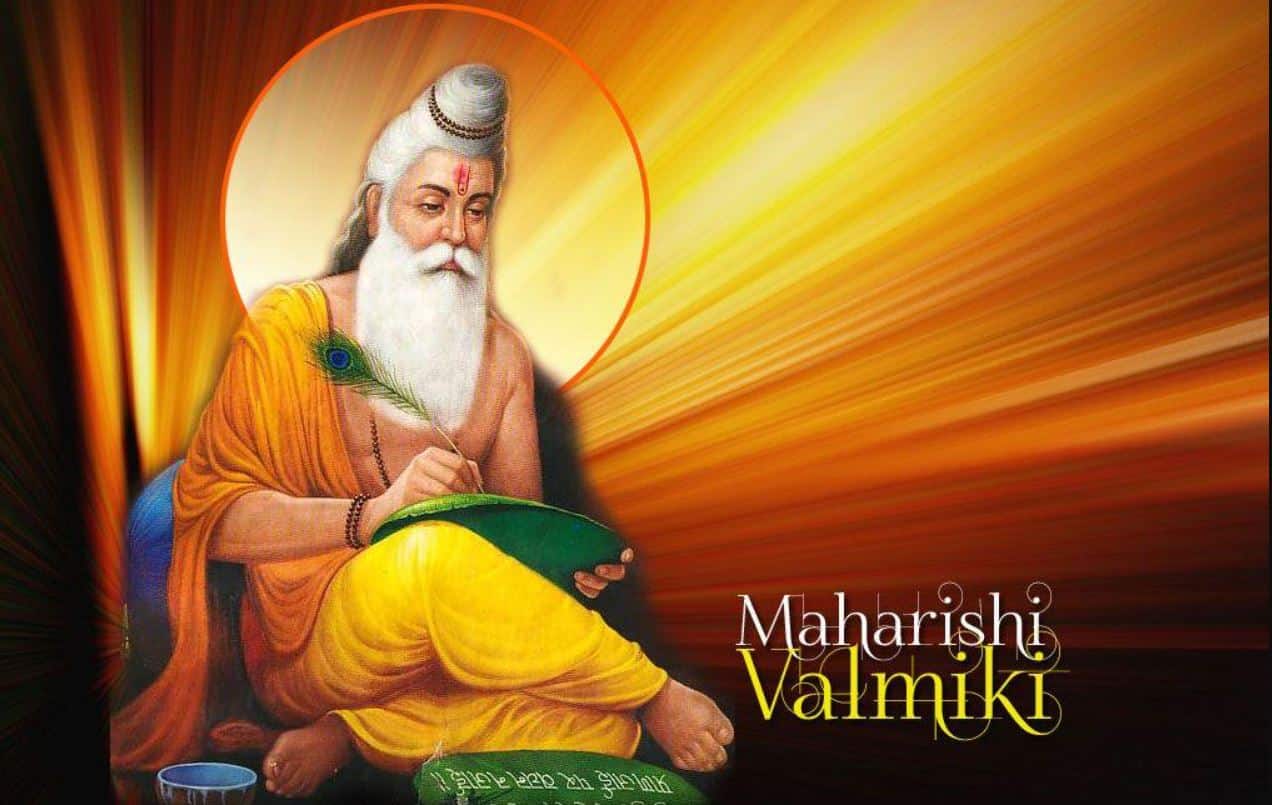 There is a dispute among people related to Maharishi’s life. One belief based on Nagara Khanda of the Skanda Purana claimed that he was born in a Brahmin family with the name Lohajangha. He had a devoted wife. There was a drought in their village for twelve years, and to survive the family from great hunger, he started to rob people.

One day, Lohajangha tried to steal from a group of seven sages called Saptarishi. But realizing the situation of Lohajangha, one of the Saptarishi, Pulatsya Rishi, provides him a mantra. Reciting the mantra while performing intense austerity for years, his entire body got covered by ant-hill or Valmika, from which he got the name Valmiki.

Another belief says that Sage Valmiki was born to a Brahmin family of Sumali or Pracheta, belonging to Rishi Bhrigu gotra with the name Agni Sharma. He later starting robbing people and was known as Ratnakar Daku. Once he met Narada muni and had a conversation regarding his responsibilities. Immensely fascinated by the thoughts and sayings of Narada, Agni Sharma started to do austerity, reciting a mantra “Mara” – death.

After many years of penance, this Mara transformed into Rama while his body remains covered by an ant-hill. That resulted in having a new name Valmiki.

Maharishi Valmiki created the first-ever Shloka in Sanskrit literature after experiencing intense anger and sadness caused by a hunter after killing a mating bird couple near the Tamasa brook. Maharishi said,

“You will find no rest for the long years of Eternity, for you killed a bird in love and unsuspecting.”

One of the greatest works of Valmiki rishi was writing Adi Kavya (First Poem) Ramayana. Ramayana is the first poem in Sanskrit history. The epic Ramayana by Valmiki comprises 24 thousand shlokas and seven cantos. It describes the entire life events of Lord Rama from his birth, education, marriage to Devi Sita, and 14 years of forest exile. Followed by Devi Sita’s kidnapping by Ravana, the war between Rama’s Vanara (monkey) and Ravana’s army finally reached to time when Lord Rama left this materialized world.

Besides Ramayana, some Indian philosophers credited Yoga Vasistha as Rishi Valmiki’s work. Yoga Vasistha is a philosophical narrative that narrates the conversation between the sage Vasistha and Lord Rama. Yoga Vasistha has six books. Each of them describes certain events and aspects of life, such as Rama’s disappointment towards nature and human sufferings, Rama’s desire for salvation, others who seek liberation, spiritual ways to achieve freedom, and finally, highlighting the importance of humans will power and creativity.

Uttara Kanda, taken initially from Sesha Ramayana, states that sage Valmiki played a crucial role in Ramayana. Rishi Valmiki offered shelter to Devi Sita in his ashram after her banishment. Devi Sita gave birth to Lava and Kusha at rishi’s ashram, where both Lava and Kusha heard Ramayana directly from their guru Valmiki.

The philosophical artwork of Maharishi had influenced the cultures and arts of several places of the Indian sub-continent and some parts of the southeast. It motivated authors and poets of various cultural backgrounds to interpret Valmiki’s Ramayana in their native language. It includes Kambaramayanam (Tamil), Molla Ramayanam (Telegu), Torave Ramayana (Kannada), Krittivasi Ramayan (Bengali), and Ramacharitamanas (Awadhi).

Various scenes from Ramayan were carved on the walls of temples and stones. A perfect demonstration would be the stone at Nagarjunkonda, Andhra Pardesh, which showcases Lord Rama and Bharata’s meeting. In modern days, Valmiki’s Ramayana influences can be seen in movies, televisions, music videos, theatres, paintings, literature, and temples. Nowadays, Ramlila – a dramatic portrayal of the Ramayana, is performed in India and worldwide in front of Hindu devotees.

A 1300 years old temple at Tiruvanmiyur, Chennai, is dedicated to Rishi Valmiki.

Through Ramayana, Maharishi taught us the following lessons to follow the correct path of Dharma and Karma:

The most popular quotes of Rishi Valmiki are:

Rishi Vishvamitra – The King Who Became a Great Sage

Narada Muni – The first messenger and a storyteller

7 Facts About Veda Vyasa, Compiler of the Vedas