The Ramayana is the testimony of the greatness of Lord Rama. From being the obedient and dutiful son of King Dashrath and Queen Kaushalya to the model brother for his siblings – Lakshman, Bharata, and Shatrughan, the fearless warrior who defeated the mighty warrior Ravana, Lord Rama did it all. But what about his role as a husband and a father? Sure he raged a war after his wife, Sita, was abducted and yet bowing down to the societal norms and gossip he abandoned his wife for a while and was unaware of the birth of his sons.

While whether Lord Rama did the right thing may be a debate for some other time, let’s get to know about his descendants – Lava and Kusha and his dynasty thereafter.

Lord Rama is said to be the descendant of the Ikshvaku dynasty founded by the legendary king Ikshvaku. Ikshvaku literally means “sugar cane”. The dynasty is also known as Sūryavaṁśa (the Solar dynasty). 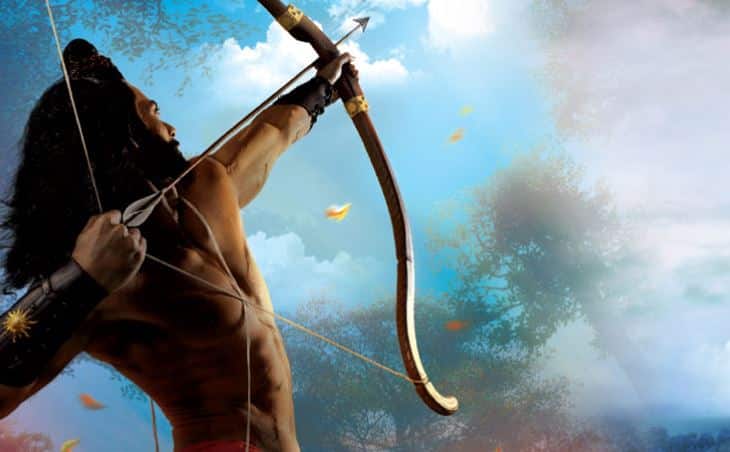 Ikshvaku is the grandson of Vivasvan or Surya and the son of Vaivasvata Manu. They ruled from the Kosala Kingdom, today known as Awadh in the state of Uttar Pradesh along the banks of river Sarayu with Saketa, Ayodhya today as their capital. Ikshvaku is the first king who executed the Manusmrti or religious rules of Hindu living which were composed by his father Manu. Ikshvaku ruled as Monarch at the beginning of the Satya Yuga or First yuga.

Once, Lord Rama heard a rumor from the citizens of Ayodhya about mother Sita, questioning Her purity. Although the demigods had attested the purity of Mother Sita during the Agni-Pariksha, Lord Rama was very grieved to hear this. Since he had incarnated Himself in order to set an example of an ideal king, he banished Sita who was pregnant, to the forest, the twin children were born to her in the hermitage of sage Valmiki. Sage Valmiki had come to know about this calamity through his transcendental vision and thus rushed to help her. The pregnant Sita gave birth to Lava and Kusha. Lava and Kusha grew in the hermitage of sage Valmiki in Avani. 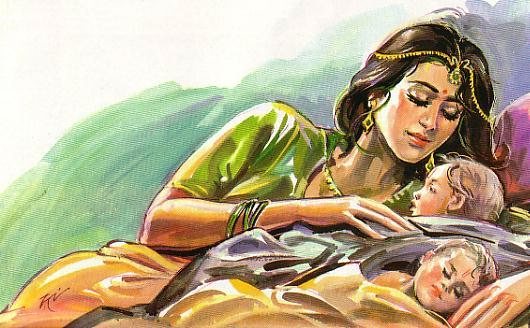 After the birth of the sons, the disciples there informed Valmiki of this and told to protect the newborn children from ghosts and demons. So Valmiki took a grass (Kusha), cut it off (lava) into two parts, and sanctified it with mantras. He instructed the women there to rub the upper part to the elder boy and the lower part to the younger boy. That is how they came to be known as Lava and Kusha.

These sons grew up to be like their father resembling them in valor, beauty, and all the inspirational qualities. Maharshi Valmiki raised them as though they were his own sons. He taught them all the Vedic knowledge. The Valmiki Ramayana ends with the coronation of Rama. The rest of the story, not narrated by Valmiki, is given in the Padma Purana. 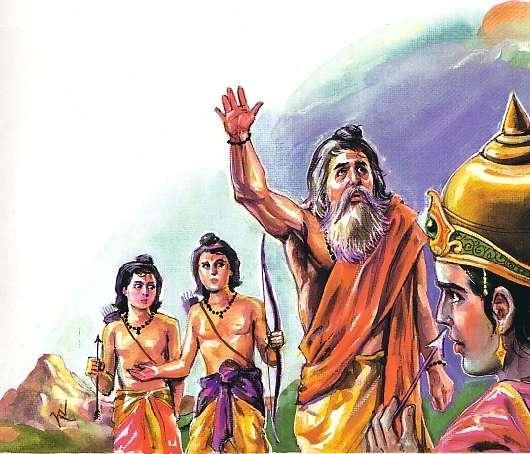 When Kusha and Lava were five years old, Valmiki arranged the tonsure ceremony of the kids. Traditionally, as soon as the tonsure ceremony is over, the teaching of the alphabets starts. Sage Valmiki himself initiated the boys in studies. The two bright boys learned the alphabets in no time. They also acquired the ability to read and write anything. Valmiki taught them the Shastras, mythology, music, archery, and whatever else he knew. The boys became experts in all those branches of knowledge. Valmiki taught his Ramayana first to his two disciples, Lava and Kusha. They used to sing it very melodiously to the accompaniment of the Veena.

Lava and Kusha were now twelve years old. Valmiki performed the sacred thread ceremony (upanayana) for them, thus giving them the right to learn the Vedas. They learned the Vedic mantras by heart. Along with that, the training in archery was also continued. The boys became proficient in Vedas and also in archery. The sage, with the mystic power of his tapas, provided them with swords and shields.

In the meantime, on a certain day, Valmiki was called by Varuna, the Sea-God. So the rishi asked Lava and Kusha to look after the hermitage carefully and left for the world of Varuna.

While Awadh flourished under the rule of Rama, he was constantly worried about the heir of the throne and his memories of Sita. Rama decided to conduct an Ashwamedha Yagna – Horse Sacrifice. The concept of this yagna was age-old. Lord Rama would do the initial puja and release a sacrificial horse, which would roam in the entire kingdom and the neighboring kingdoms. If the other kings did not fight the army following the horse, they were deemed to have accepted the rule of Rama and would be aligned to him. If any of them would not accept Rama as their emperor, they would have to fight and defeat the army. 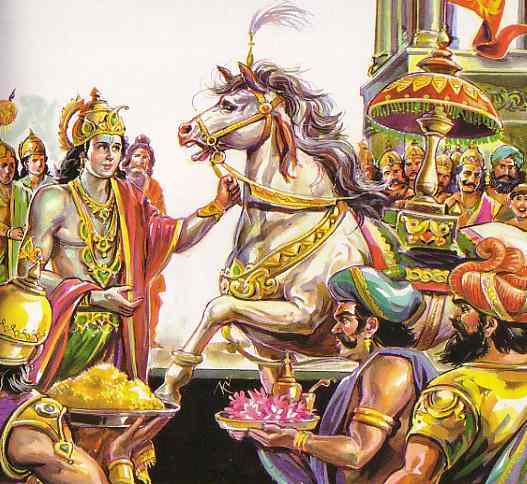 The Ashwamedha horse went past many countries. The kings of all those States paid tribute and became Rama’s descendants. The horse was now returning to Ayodhya.

On the way, it entered Valmiki’s hermitage. Seeing the lush green grass there, It trampled upon the flowerbed. Lava saw the horse. He went near it and saw the golden plaque on its forehead. When he read the inscription, he became very angry. He thought, “is Rama, the son of Kausalya, the’ only hero? If I don’t humble his pride, what is the use of my being the son of Sita?” With the towel, which was his upper garment, he tied that horse to a tree.

Meanwhile, the soldiers accompanying the horse came there. They became angry that the horse had been tied up. “Who did this?” they asked the boys who were ‘there. Trembling with fear, the boys said, “We didn’t do that. It was he,” pointing at Lava. The soldiers turned to Lava and shouted, “Untie it first.” But Lava refused. When a soldier tried to untie, Lava shot an arrow. The other soldiers were all very angry and started a fight, which Lava actively deflected until the commander of the troops, Shatrughan, attacked and injured Lava and carried him in the chariot towards Ayodhya. 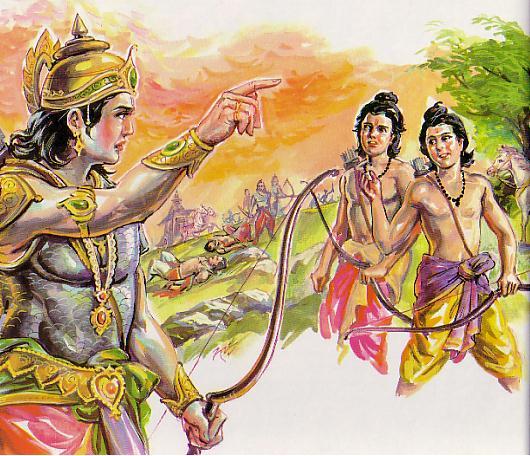 Kusha chased the army like a whirlwind and asked them to stop and a fight broke down which injured Shatrughan. A messenger was sent to Lord Rama, who couldn’t believe he was injured by a boy so he sent help along with Lakshman. Kusha left his brother to fight the army and himself faced Lakshmana. A fierce fight ensued between the two. The news that Lakshmana too was defeated and was aground reached, Rama. Rama was upset. The people around whispered, ‘This Rama unjustly sent away his virtuous wife Sita to the forest. This is the result of that sin.’ Even Bharata, Hanuman, and Jambavanta entered the foray and were spellbound by the kid who bore a strong resemblance to Lord Rama and uttered the name of Valmiki. The sage Valmiki proceeded to the battlefield with Kusha and Lava. Consecrating with sacred spells the water in the vessel he carried, he sprinkled that water on all the persons lying on the ground.

Then he said, “0h great kings, you are very kind-hearted. You always protect those who come to you in need. Please do not be angry. These boys are your own sons. They are born to Sitadevi. They have now committed a big mistake when I was not in the Hermitage. You must pardon them.”

Valmiki sent Lava and Kusha to the hermitage and had the Veena brought. As asked by their preceptor, the boys sang the Ramayana to the accompaniment of the Veena. Lord Rama overwhelmed with joy decided to take his sons to the palace and sent for Sita along with Valmiki. When Rama asked Sita for forgiveness and asked her to join him Sita replied  ‘My only wish was to see my sons safe with their father,’ she added. ‘I have now seen that happen. All that I now desire is to return to my mother, the Earth.’ So saying, Sita folded her hands, and called upon her mother to take her within her. All at once the earth opened beneath Sita’s feet, and before the astonished gaze of the King of Kosala and his court, Sita vanished from this world forever.

After she was gone, Shri Ram continued ruling Ayodhya, for 11000 years (his complete tenure of the regime) and when his time of departure came, he also left the mortal world transforming to his Vishnu Swaroop and joined Bhagwati Lakshmi in Vaikunth dipping in the Sarayu river. 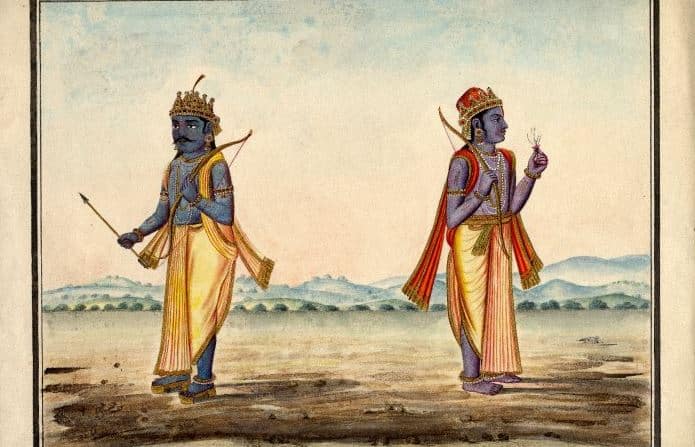 Famous kings after Lava and Kusha

Though none of the Kings of the Suryavanshi clan managed to be as powerful and famous as Lord Rama here is the few notable ones.

The Puranas provide a genealogical list from Kusha to Brihadbala, who was killed by Abhimanyu in the Mahabharata war. This list is corroborated by the Raghuvamsha till Agnivarna.

The Puranas also provide the list of the kings from Brihadbala to the last ruler Sumitra. But these lists mention Shakya as an individual and incorporate the names of Shakya, Shuddodhana, Siddhartha (Gautama Buddha) and Rahula between Sanjaya and Prasenajit.

Ahinagu or Ahinaga, which the Shrimad Bhagavatam renders as Ahina Alternate Pali sources mention that Ahinaga, the King of Ayodhya was one of the Naga Kings ruling with great power and majesty who was converted to Buddha’s faith. Ahinaga is also portrayed in Buddhist literature as an initial adversary of Buddha and sometimes as Vritra or as a descendant of the Vedic Ahi-Vritra

Suddhoda Shakya, the Bhavishya Purana states that he was Suddodhana, the father of Gautama Buddha and since Buddha abdicated the throne the lineage continued with his son Rahula. 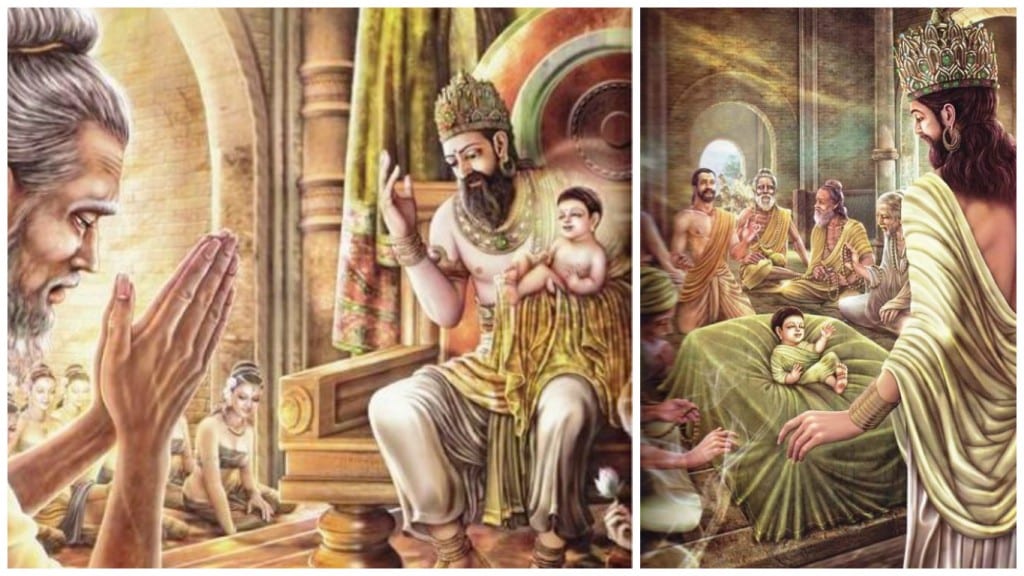 The Ikshvakus were a coveted line. In the fourth century BC, emperor Mahapadma Nanda of the Nanda Dynasty forced Sumitra to leave Ayodhya. He went to Rohtas with his sons. His son Kurma established his rule over Rohtas. After King Sumitra, the dynasty of the sun-god is said to end.