Mahabharata tells us the story of a great many characters. The epic is the tale of lust for power that separates and ends an entire clan, a story of good over evil, dharma, and karma over family and love. With such morals, Mahabharata also tells us stories of minor characters who have striven to enlighten the key patrons of the Saga about their Dharma and Karma. One such story is the tale of king Bharat who was later also known as Jada Bharata.

According to the Adi Parva of Mahabharata, King Bharata was the ancestor of the Kauravas and the Pandavas.  The legend goes that King Dushyanta encountered the beautiful Shakuntala in the woods while tending a wounded deer and fell irrevocably in love with her and married her according to Gandharva tradition. He then left for his court, giving Shakuntala a ring to remember him and bring along once she was ready.

Lost in thoughts of Dushyanta, Shakuntala was cursed by a sage for not tending to him well. The cursed stated that the person she was dreaming of would forget about her altogether, which was later modified to lessen the blow, saying that the person who had forgotten Shakuntala would remember everything again if she showed him a personal token given to her. 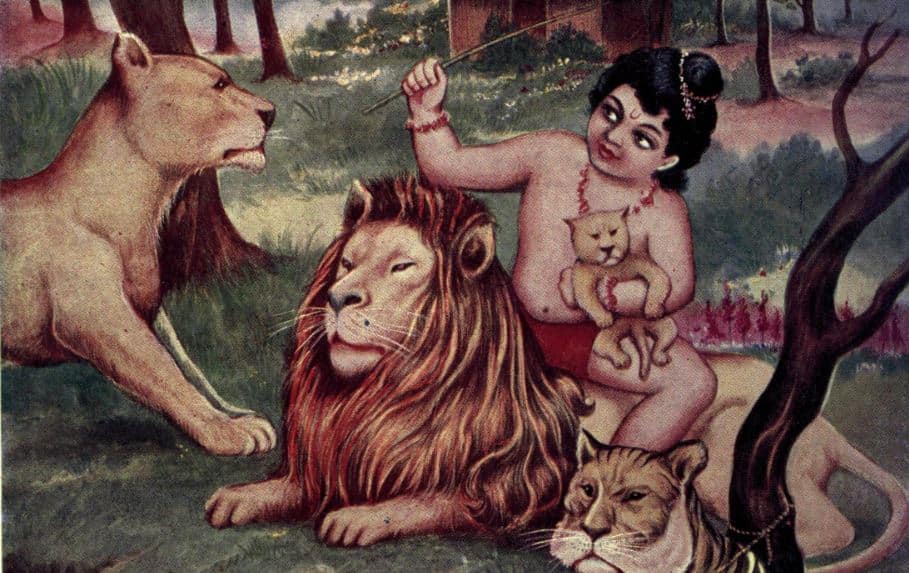 Sadly as per the curse, Dushyanta didn’t remember her. She even lost the ring given to her while traveling along a river. Shakuntala lived in the forest with a child, later raising Bharata to be a fierce, brave prince.

One day a fisherman incidentally catches the same fish who had consumed the ring. His wife wanted to make curry out of it while cutting up the fish. She finds the ring and takes it to the King. The King then remembers Shakuntala and sets out in search of her. He continued deeper into the forest to find his wife and witnessed a dramatic scene in the forest: a young boy had pried open the mouth of a lion and was busy counting its teeth.

The King greeted the boy, amazed by his boldness and strength, and asked his name. He was surprised when the boy answered that he was Bharata, the son of King Dushyanta. The boy took him to Shakuntala, and thus the family was reunited.

Young Bharata conquered and ruled the entire sub-continent of India, from sea to Himalaya. His empire was named Bharatavarsha, the land of Bharata.

The country (varṣam) that lies north of the ocean and south of the snowy mountains is called Bhāratam, the descendants of Bharata – Vishnu Purana dwell.

He expanded the territories of the Purus. His power directly extended to north India and indirectly to the entire India up to the southern tip, then known as the Kumari region (now known as Kanyakumari), a Yaksha stronghold.

King Bharata was an unconventional ruler. He ruled his empire more like a democracy giving control to his citizens. Usually, a king’s eldest son inherits his kingdom. Bharata had many sons. Mahabharata mentions about nine sons born of his three wives. But he did not give the throne to any of them as he believed they weren’t worthy but chose Bhumanyu, the son of Bharadwaja, to be the next King.

Bharadwajas were a lineage of sages belonging to the race of Angiras. King Bharata believed that his decision to make Bhumanyu his successor was just and in line with his principle of democracy.

After fulfilling his duties as a householder (Grihastha), he contemplated the life of VanaPrasta & Sanyasa (Renunciation) transferred all his duties to his children. He moved to a forest and meditated with the ultimate purpose of attaining Liberation. He soared in realization; his meditation was getting better & better, he had attained many higher stages in meditation. He was spending the last days of his life in search of the ultimate knowledge –Mukti.

As elusive as Mukti is, Bharat would soon realize it, thanks to a doe. A lonely pregnant doe was drinking water from the river; a sudden lion roar from a short distance. The doe was terrified & tried to jump over the river from the top of a big rock; in mid-flight, it gave birth to a baby doe which fell into the river, the mother doe hit the rock on the other side and died. The retired King brought it out of the water, the forest was a cruel place for a young Doe to survive, and he thought he would take care of it until it could take care of itself. 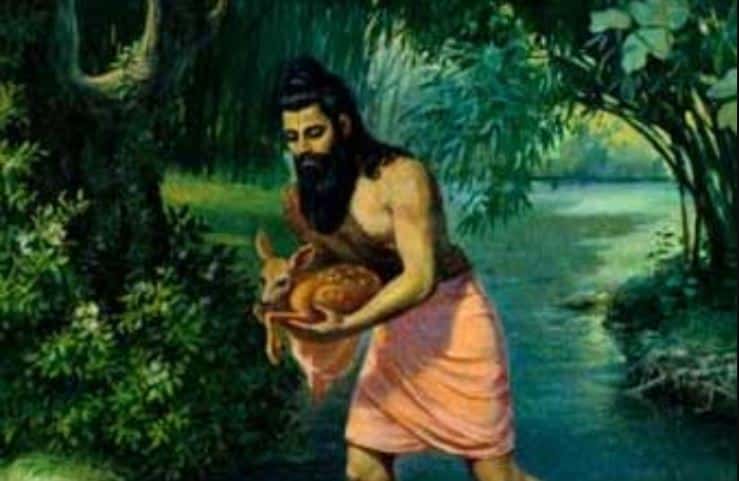 He became emotionally attached to the baby doe, feeding it, playing with it, and in the process ignoring his meditation. Bharata was already at the end of his life, one day he couldn’t find the doe anywhere near the cottage, he looked for it all day and couldn’t find it, he was overcome with intense pain, he lamented for the missing deer, and his old body couldn’t take the toll. Bharata died thinking of doe, and he came back to his next life as a doe.

Life as a doe

King Bharata realized that because of his attachment to the doe, he was reborn in the womb of a doe, but because he had attained a higher spiritual realization in his past life, he had a memory of his previous life. Though trapped in a doe’s body, his actions were that of a yogi. He would sit near Ashrams of Rishis, and he would listen to them sing chants and hymns. 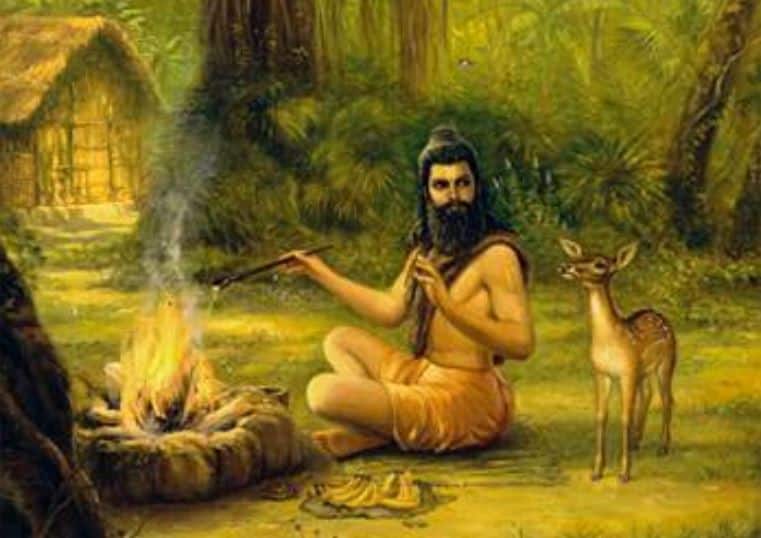 As time passed, his life as a doe ended; he then consciously took birth in a Brahman woman’s womb. He was born as the second child of the 2nd wife of a scholar.

Knowing that his past attractions led him astray from childhood, Bharata decided to act stupid. He would mispronounce mantras though he knew them very well. His father would teach him rituals, and he would do them in reverse. His father loved Jada Bharata (Dull Bharata) very much, and it pained his father’s heart that life would be difficult for his son after his death. After some time, Jada Bharata’s father died.

His brothers and sisters-in-law ill-treated Jada Bharata. He would wander around, sometimes work for food, and sometimes beg for food. The brothers worked him like their slave; they sent him to stand in the fields watching the crops, he would stand like the scarecrow from morning to evening, sometimes they would feed him, and sometimes he would be standing on an empty stomach.

At this time, being desirous of obtaining a son, a leader of dacoits who came from a śūdra family wanted to worship the goddess Bhadra Kālī by offering her in sacrifice a dull man, who was considered no better than an animal. They saw the exalted son of the Āṅgirā family [Jaḍa Bharata], who was sitting in an elevated place guarding the field and kidnapped him. They bathed Jaḍa Bharata, dressed him in new clothes, decorated him with ornaments befitting an animal, smeared his body with scented oils, and decorated him with tilak, sandalwood pulp, and garlands. They fed him sumptuously and then brought him before the goddess Kālī.

Intolerant of the offenses committed, the infuriated goddess Kālī flashed her eyes and displayed her fierce, curved teeth. Leaping violently from the altar, she immediately decapitated all the rogues and thieves with the very sword they had intended to kill Jaḍa Bharata.

After witnessing this, he walked out. While walking on the road, a gang of men found him and assigned him to carry their King’s Palanquin. It was the Palanquin of King Rahoogana of the kingdoms of Sindhu and Sauvira.

Jada Bharata and the King Rahugana

Without complaining, Jada Bharata became a carrier of King’s Palanquin. He carried the King around along with other carriers; as it happened, a small worm walked onto his path. Jada Bharata stretched his step to avoid stepping on it, and the Palanquin shook badly, and the King shouted at Jada Bharata. When he shook the Palanquin for the second time in an attempt to save the life of a worm, the King lost all patience and told him off yet again.

And this time, Jada Bharata spoke, “O King, how rude are you? I avoided stepping on another life at the cost of your discomfort; where is your sense? How can you be so senseless born in the King’s family and being brought up with the teachings of scriptures? You don’t deserve to be a king if you have no compassion for all life. Leave your arrogance and fulfill your duties obediently, focus on virtues and give up your pride.”

The King understood he wasn’t in the company of an ordinary simpleton, so he asked for his identity, to which Bharata replied, “In my past, I was known as Bharata; in fact, I’m your ancestor, you are from the same lineage. I have no purpose in life except the realization of the final truth, and I’m wandering because I have no desire left anymore.” 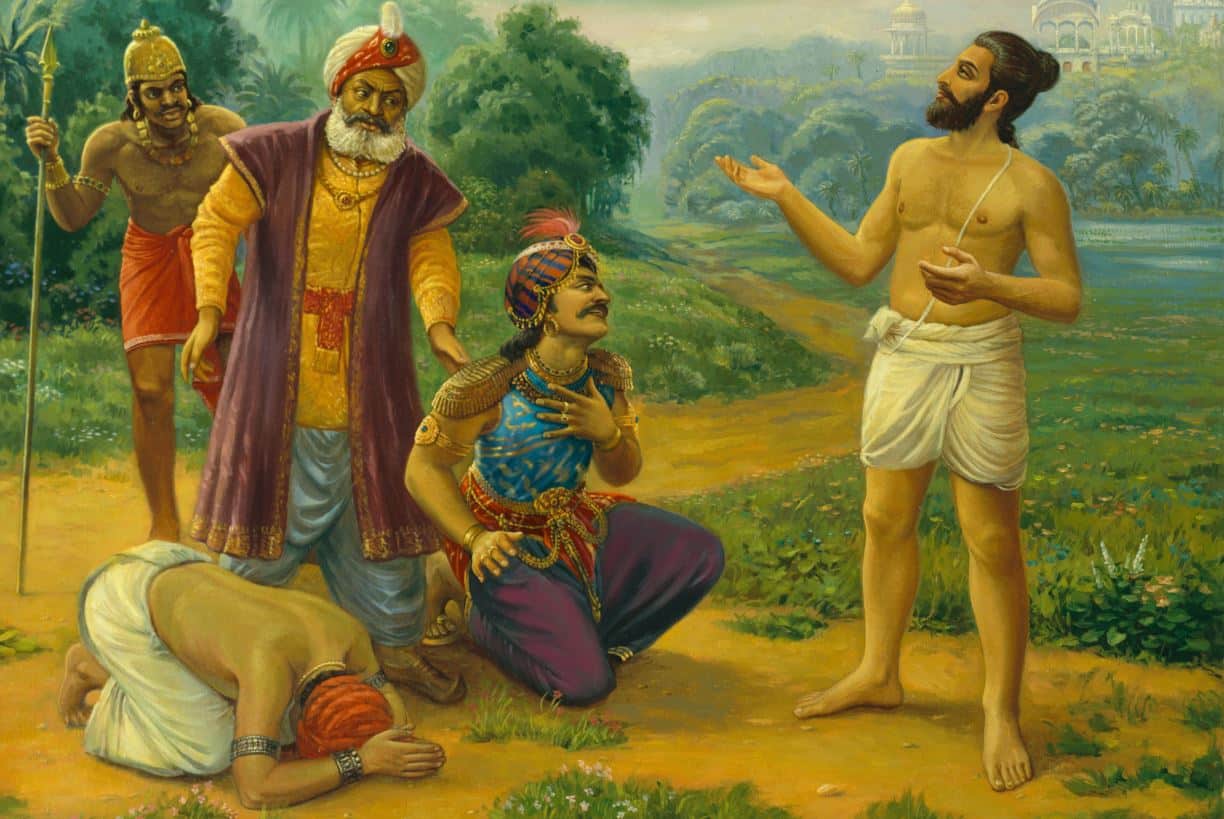 The King begged him to take him as his disciple; he took Jada Bharata to the palace and had him initiate all other members of his palace into Yoga. Jada Bharata stayed there until he taught them some basics of spirituality and then left the palace, again wandering around aimlessly, only keeping the focus on the ultimate reality. Thus the great King Bharata ultimately found his Moksha.

1200 Years Old Kailasa Temple Made Out of Single Rock