Lord Krishna is a prime Hindu god and is considered the eighth incarnation of Vishnu and the most popular avatar of Lord Vishnu. Sri Krishna spoke Bhagavad Gita to Arjuna, the central figure of Mahabharata. According to Mahabharata, Krishna belonged to the Yadava clan, and the birth of Sri Krishna is portrayed in a picturesque manner.

The divine birth of the Lord Krishna

Born in 3228 BCE in Mathura, India, Krishna was destined to reshape manhood’s spiritual and temporal destiny. To devoted parents, Devaki and Vasudeva, Krishna was born in jail of his maternal uncle, Kamsa. A sage had told his egoistic uncle, Kamsa, that he would be killed by his sister Devaki’s eighth child. Since Sri Krishna was the eighth child, he was smuggled out of jail to be brought up in Gokula by his foster parents, Nanda and Yasoda.

Read more about the Birth of Sri Krishna and His Leelas

In Vrindavan, one of the Vraja villages, Krishna won the hearts of the gopis, the cowherds of the village.

With his mischievous pranks, the infant Krishna was adored; he also performed several miracles and killed demons. As a youth, the cowherd Krishna became famous as a lover, the sound of his flute tempting the gopis (cowherds’ wives and daughters) to leave their homes in the moonlight to dance ecstatically with him. The stunning Radha was his favorite among them.

According to a popular story, Krishna carried off the gigantic serpent Kaliya from the river to the sea. Sri Krishna also raised the Govardhana hill with his little finger and kept it as an umbrella to shield Vrindavan’s s people from the torrential rain caused by Lord Indra, who was irritated by Krishna. He then remained in Nandagram until he was ten years old.

Kamsa sent a lot of killers to kill Krishna, but none of them could. Lord Krishna and his brother Lord Balarama came back to Mathura and killed Kamsa, returning dharma to the land. Afterward, considering the kingdom dangerous, he led the Yadavas to Kathiawar’s west coast and set up his court in Dvaraka (modern Dwarka, Gujarat). He fell in love with a beautiful princess from the Vidarbha Kingdom, Rukmini, and married her. Lord Krishna married seven other wives. 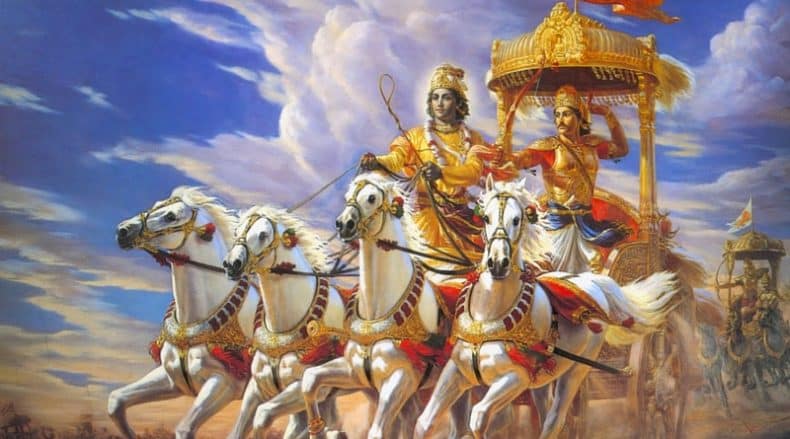 Sri Krishna became a counselor and friend to Pandava prince Arjuna. In the great war of Kurukshetra between the Kauravas (sons of Dhritarashtra, the successor of Kuru) and the Pandavas (sons of Pandu), Krishna declined to bear arms. Still, he agreed to choose his presence on one side and his army loan on the other.

Sri Krishna sought to mediate to avoid a confrontation, despite the Kauravas’ provocations. He requested the Kauravas to give the Pandavas a small amount of land. Dhritarashtra, however, opposed any compromise. Sri Krishna gave his dearest friend Arjuna a choice once war became inevitable–either he could choose Sri Krishna himself, or he could choose the armies of Krishna. Arjuna preferred Sri Krishna’s advice instead of his troops.

Krishna met Gandhari after the Battle of Kurukshetra to give her condolences (Gandhari, Dhritarashtra’s aunt, who had lost 100 sons in the battle) Gandhari cursed Sri Krishna because she thought he might stop the fighting. Gandhari cursed that Krishna and anyone from the Yadu dynasty should die within 36 years.

On Kurukshetra’s battlefield, Sri Krishna revealed the Bhagavad Gita’s to his disciple and friend Arjuna. Bhagavat Gita explains how an aspiring seeker could pursue a union with God. Like previous Indian scriptures, the Bhagavad Gita did not require renunciation of the universe but encouraged acceptance of the earth. The Bhagavad Gita and Sri Krishna’s history were very significant.

“You are only entitled to the action, never to its fruits. Do not let the fruits of action be your motive, but do not attach yourself to nonaction.” – Bhagavad Gita Chapter 2, Verse 47

Occasionally, Sri Krishna interfered during the war to help Arjuna and the Pandavas win. Sri Krishna broke his word – proving his dearest disciple’s devotion was greater than so-called human morality.

Sri Krishna also revealed his universal form (Vishwa rupa) to Arjuna, showing his full spiritual realization. After this, Arjuna became Sri Krishna’s disciple, not just an admirer and relative. Sri Krishna represented the human and the spiritual elements. He played a human role as an avatar, but at the same time, he was a fully realized spirit, one with God. During his life, few remembered Sri Krishna’s spiritual level.

It is the Gita that is an essential gift to the world of Krishna. Many believe that the whole object of the birth of Krishna was to deliver this “Song of the Divine,” which includes the advice of Krishna to Arjuna on the cusp of the Mahabharata War. The Gita expresses the essence of faith in a way that the ordinary person understands. Swami Chinmayananda says, “With the Gita, Sri Krishna took the knowledge of the Upanishads down from the Himalayas and into the marketplace.” 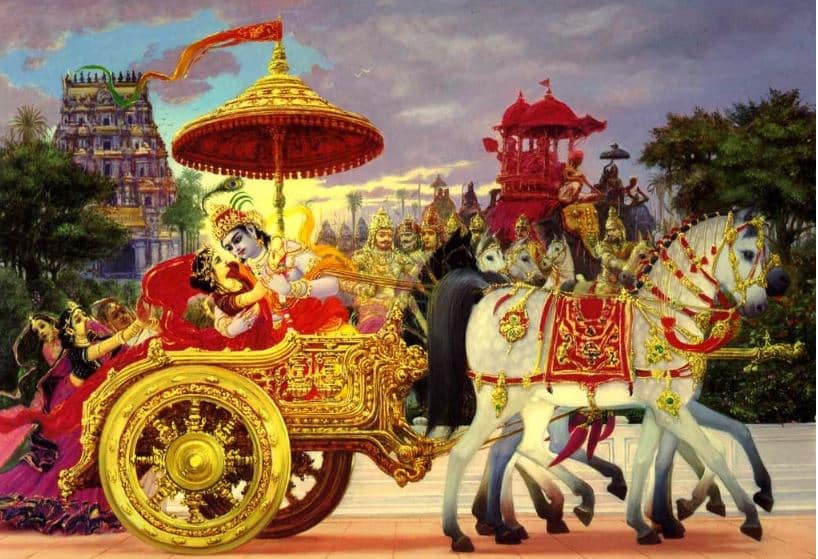 Sri Krishna married eight principal wives and had ten sons, each from 8 different wives. It is also said that after killing Narakasura, Sri Krishna accepted 16,100 more women as wives who were all saved from the Palace of Narakasura. This reflects the sympathy of Sri Krishna for the dominated and helpless victims of the old social customs and culture.

His eight wives are:

Sons and Daughter of Lord Krishna

Lord Krishna had 80 sons, ten from eight prime queens (ashta patraanis). Following are the names of 80 sons of Lord Krishna from these wives:

Lord Krishna and Rukmini had one daughter with name Charumati (चारुमती), according to an earlier version of Srimad Bhagavata (10.61.24).

But, According to His Divine Grace A. C. Bhaktivedanta Swami Prabhupada, Lord Krishna had a daughter by each of His wives, numbering a total of 16108.

Krishna came back to Dwarka after the Great War. He taught divine knowledge to Uddhava, his friend and disciple, in his final days on earth, and ascended to his dwelling after throwing off his body, shot at by a hunter called Jara. He is believed to have been alive on earth for 125 years.

Legend has it that when a Jara shot him, who mistook Sri Krishna for a deer, he was killed by an arrow through his foot. The ankle was Sri Krishna’s body’s one area of weakness. He peacefully embraced death; he understood his time on earth soon came to an end.

Krishna’s worship may have started as early as the 5th century BCE. Most believers worship him today as the supreme Hindu god, and he is especially revered in southern India in Bengal and Udupi. One of the many festivals held in his memory is the ‘Puri ratha-yatra chariot’ festival that memorializes the successful attempt by Radha to persuade Krishna to return to Vrindavana.

The most widespread festival is the Krishna Janmashtami (mid-August to early September), which includes devotees fasting for 24 hours, giving baby Krishna milk sweets, and lighting wicks soaked in ghee (purified butter) in the ritual known as arati at midnight.

Krishna is traditionally depicted with a dark (usual blue-black) skin in Hindu art, and he can hold Vajranabha’s chakra discus and Kaumodaki’s club–both provided by Agni. He usually wears a yellow dress, has a peacock feather in his long black hair, and plays the flute. Cows often accompany Krishna about his profession as a cowherd in his youth.

The most famous scene of Krishna’s adventures in arts is the raising of Mt. Govardhana, and God is often depicted in notable places. 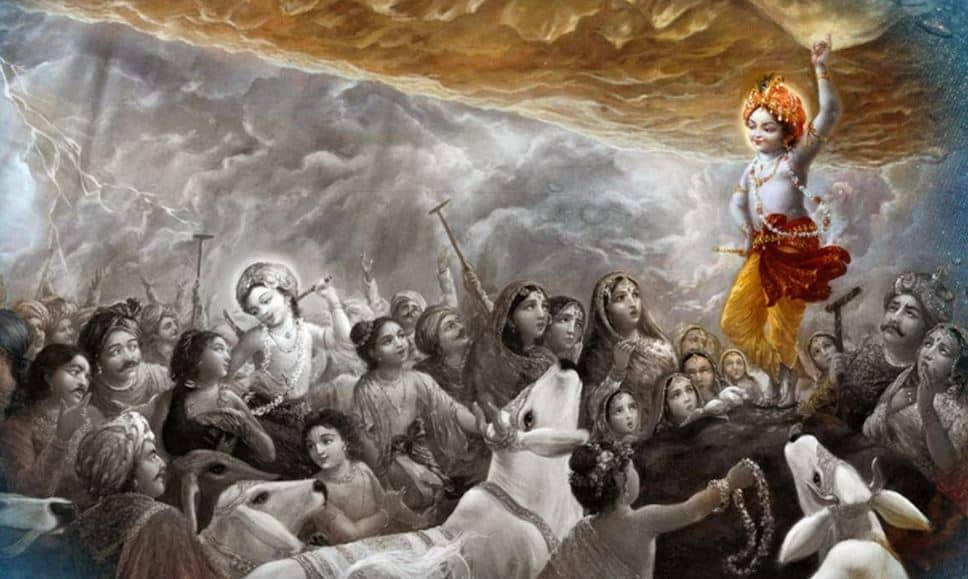 The personality of Krishna is a composite one, although it is not easy to separate the different elements. The 5th century BCE deified Vasudeva-Krishna. Perhaps the cowherd Krishna was a pastoral culture deity. Eventually, the Krishna who arose from combining these figures was associated with the supreme God Vishnu – Narayana and therefore called his avatar.

His religion maintained distinguishing characteristics, including an analysis of the analogies between divine love and human love. Thus, youthful dalliances between Krishna and gopis are interpreted as signs of a romantic interplay between God and the human soul. 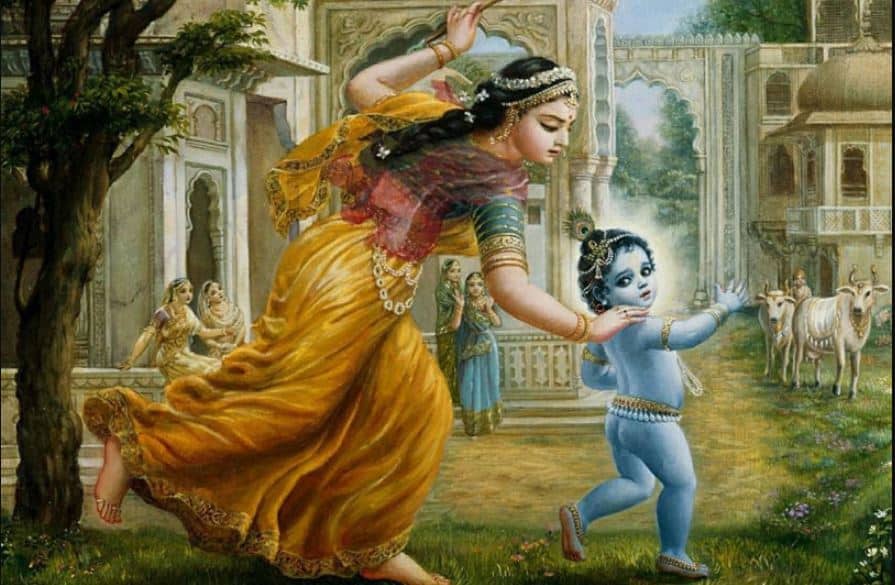 The wide variety of legends connected with the life of Krishna has contributed to an abundance of painting and sculpture depiction. The infant Krishna (Balakrishna) is portrayed as crawling on his hands and knees or joyfully dancing, a butterball held in his lap. The divine lover is shown playing the flute, surrounded by worshiping gopis, the most famous depiction.

Why is Lord Krishna called Ranchod?

The term Ranchod means one who flees away from the battlefield. The name is indicative of a story centered on a clever plot devised by Lord Krishna to kill the otherwise invincible demon Kaalyavana.

In the age of Dwapara, the Mahabharata war on the soils of Kurukshetra was over, and Dharmaja, the eldest of the Pandavas, was put on the throne of Hastinapur. Now Krishna moved to Madhura to take care of his Yadhava clan. Yadhavas faced a frequent threat from several enemies.

Once, the terrific demon Kaalayavana waged an attack against the Yadhava Kingdom along with Jarasandha of Magadha and other allies. To save the Yadhavas, Krishna created a fabulous city named Dwaraka in the middle of the ocean. Overnight, the Yadhavas were transported to Dwaraka.

The forces of Kaalayavana advanced, pursuing Krishna. To enter into a duel with Krishna, Kaalayavana chased him. Krishna pretended to be running away from the battlefield, followed by Kaalayavana. In a witty plot, Krishna allured Kaalayavana inside a cave where Muchukunda was meditating. This was an emperor and the ancestor of Lord Rama of the Treta Yuga.

Earlier, Muchukunda assisted Indra in his battle against the Asuras. When Indra won the war with his help and asked him what boon he would want in return, the emperor asked for a long undisturbed sleep for ages to rest. He also asked if anyone disturbed him from his sleep to be burnt to ashes. Indra acceded to his wish and granted the same. Thus the stage was set for this act, and Krishna eventually ended up with the name Ranchod.