Yogis have different methods to revive their bodies, but ultimately with the intention of drawing yourself inward. Among many, chanting ‘Mantras’ are a powerful tool for accomplishing this. Thus chanting mantras makes it easier for any Yogi to reach that transcendent state more easily. A mantra is a sound, word, or group of words that is considered capable of “creating transformation.” 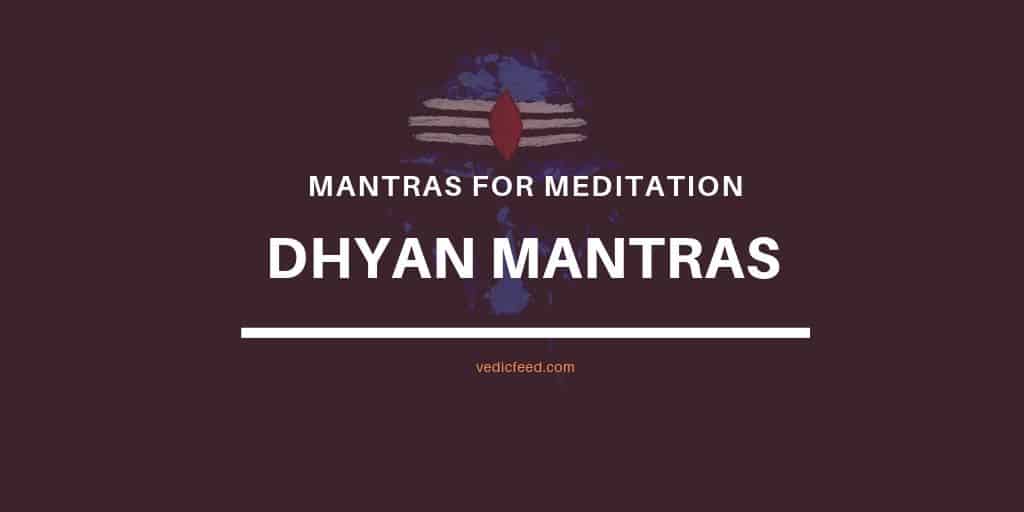 There are more than ten million mantras in existence. Some mantras are as short as one syllable. Others are several syllables long. The vibration om is one of the most well known universal mantras. According to the ancient Vedic tradition, the vibration ‘Om’ contains every vibration that has ever existed – and every vibration that ever will. Likewise, there are many mantras with different yet specific purposes.

Hence, amongst many here are some Powerful Dhyan Mantras or Mantra for Meditation.

‘Om’ is the all-pervading, omnipotent and omnipresent sound of the Cosmos. For this reason, it is also referred to as ‘Pranava’; the energy that runs in our Prana. ‘Om’ is not just regarded as a word, it is an intonation produced by coalescing the three Sanskrit syllables (Au-Oh-Mm); which on concentrated repetition gives a threefold experience on the physical, mental and the astral plane.

‘Om’ represents the incomprehensible and unmanifested / Nirguna aspect of the supreme; at the same time, the symbol of Om signifies a comprehensible and manifested aspect of it so as to provide the human mind with a conceivable channel to lead them towards the realization of its actual Nirguna state. Thus, chanting ‘Om’ or ‘Aum’ is one of the best ways to start any meditation.

The strotra says, The Guru (dispeller of darkness) is Brahma (the creator); the Guru is Vishnu (the sustainer); the Gurudeva is Maheswara (the destroyer); the Guru is Verily the Para-Brahman (ultimate consciousness); Salutations to that Guru.

The Gayatri Mantra is a universal prayer enriched in the Vedas, which is also known as Savitri Mantra. It is considered a very powerful and popular mantra for meditation. In brief, the mantra means, “O thou existence Absolute, Creator of the three dimensions, we contemplate upon thy divine light. May He stimulate our intellect and bestow upon us true knowledge.” In simpler terms, “O Divine mother, our hearts are filled with darkness. Please make this darkness distant from us and promote illumination within us.”

Eventually, the mantra is an expression of gratitude, to both the life-giving Sun and the Divine. It boosted devotee taking a heart-centered approach to the mantra. The sensibility it awakes is more significant than the literal meaning. It’s an offering, a way to open to grace, to inspire oneself.

The literal meaning of this Shiva mantra is “I bow to Shiva”. Shiva, here is the supreme reality, or in other words, the inner Self. Thus, while you are chanting this mantra, you are calling for the inner self. Panchakshari shiva mantra boosts the inner potential and strength, and also fills life with positive energy.

Om Namah Shivaya is at the heart of the Vedas and Tantras (ancient Scriptures) and finds its mention in the Yajurveda in the Shri Rudram hymn. Perceived to be most effective if in the practice of Japa Yoga, where the mantra is repeated verbally or mentally 108 times a day while keeping count on a strand of Rudraksha beads and at the same time submitting oneself to Lord Shiva’s infinite, all-pervasive presence, however, while chanting of the manta, you need no special rituals or ceremonies. It is a great mantra before any meditation.

This mantra is done before chanting other Durga Mantras. It helps one to achieve a better concentration in his work and in anything he does. This mantra for meditation helps us to focus and it is an important mantra for everyone.

Divine vibrations that are generated during the chanting of this mantra ward off all the negative and evil forces and create a powerful protective shield against diseases, sorrows, fears etc. The mantra means, “Hey! Supreme One to cleanse the body, mind, and soul of all the stress, rejection, failure, depression and other negative forces that one faces.” It is a beautiful mantra for a sadhak before meditation.

It states, I salute, pray and meditate on Lord Vishnu who has a peaceful body posture, a serene Appearance; who sleeps on the Sheshanaga (the mighty mythological serpent); who has a lotus in his navel, who is the king of all the devatas, who is the base of this world, who is like the sky; who has a color like that of a cloud, who has an all-auspicious body. I worship Lord Vishnu; the one who is the lord of Lakshmi; who has the eyes like a lotus; who is seen by yogis in their meditation; is the remover of fear of life and death and is the only Lord of all the worlds.

Devi Saraswati whose body is white like the Kund flower, Devi who is fair like the moon, the snow and the garland of pearls, Devi who is draped in white clothes, Devi who is holding Veena in her hands, Devi who sits on the white lotus flower, the Devi who is always adored by the trinity of Brahma, Vishnu & Shiva, Devi who removes the darkness of ignorance, may she protect me and nourish me.

This particular mantra for meditation reads, “O supreme lord, free me from unreal and lead me to reality, keep me away from darkness and lead me to light, lead me away from fear death to immortality (enlightenment), om may there be peace, peace, peace”. Thus, this mantra helps us realize things that are real, and transcends our state of mind fit for a deeper and relaxing meditation.

Recommended – Buying a Meditation Shawl or Blanket – 8 Things To Consider

Nirvikalpa Samadhi – Final Step on the Path of Yoga

20 Benefits of Meditation During This Pandemic