Sri Anandamayi Ma, her name in translation from Sanskrit, means Mother, imbued with bliss. Her devotees consider her to be the embodiment of the goddess Devi. Mahatma Gandhi, Jawaharlal Nehru, and Indira Gandhi treated her with the deepest respect and love. Swami Sivananda called her the purest flower that ever appeared on the land of India. 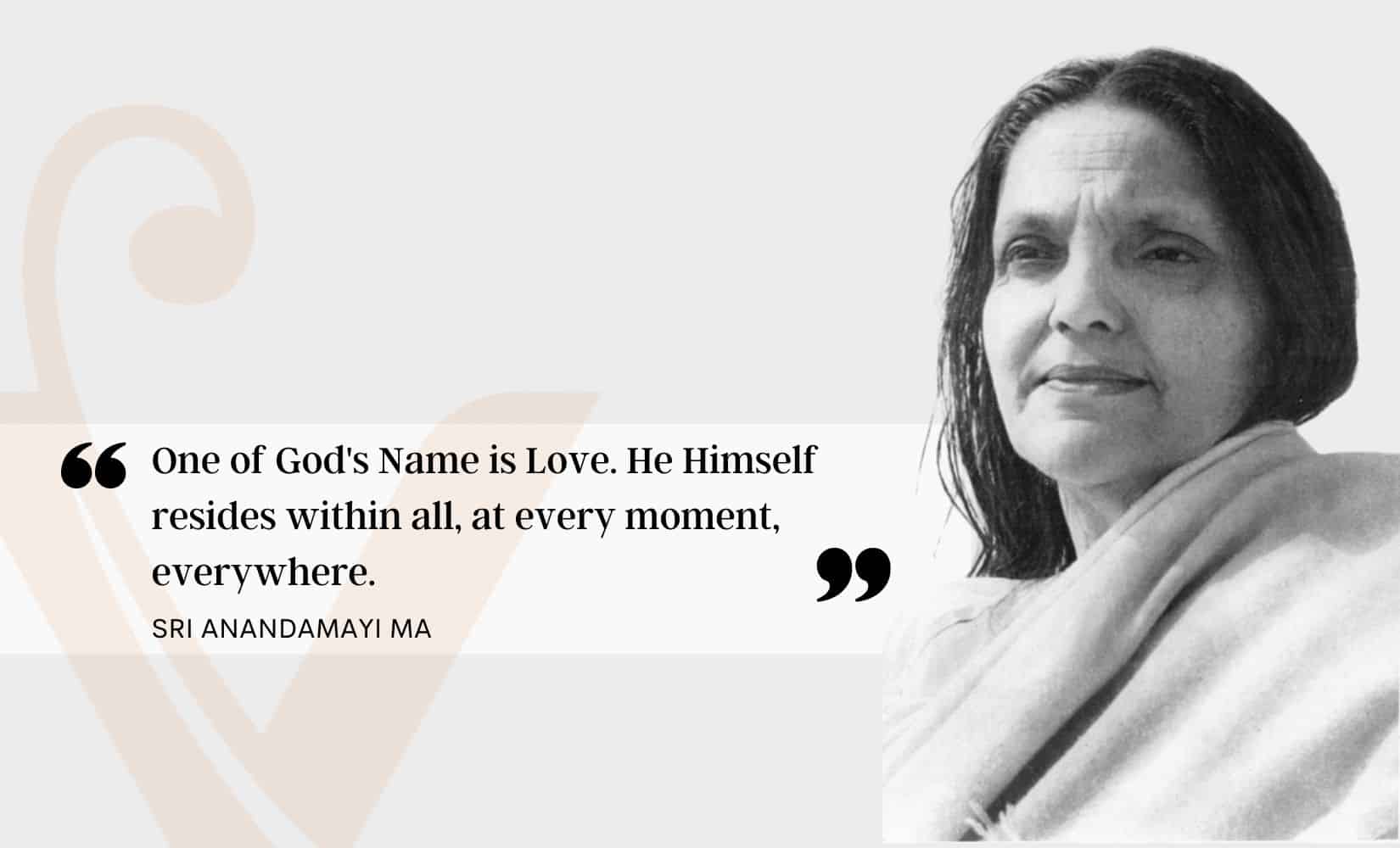 Anandamayi Ma was born in a small, predominantly Muslim village of Kheora in East Bengal on 30 April 1896. Her parents were Brahmanas, poor but very pious. Before the birth of Anandamayi Ma, her mother often saw different deities in her dreams, and when her daughter was born, she named her Nirmala Sundari, which means flawless beauty. From the time of her birth, she was fully aware of her surroundings. People called her the mother of smiles (Hasi Ma) or a happy mother (Khusi Ma) from an early age.

At birth, she did not cry, and throughout her childhood, she was extremely calm and peaceful. From time to time, she would enter trance states, apparently experiencing samadhi – free from thoughts of absorption in God. She also spoke with love for plants and invisible heavenly beings.

Ma loved all living creatures of Mother Nature and did not eat meat or fish. She spent only two years in elementary school. In life, she was distinguished by a sharp mind, good memory, and skill in performing various tasks.

In the thirteenth year, Anandamayi Ma was married to a pleasant young man named Bholanath (Ramani Mohan Chakravarti). Since he did not have a permanent job and often had to travel, she stayed in her parents’ house for another year. Later she lived with his older brother and sister-in-law for another four years.

The new relatives were fascinated by her friendliness and humility, as well as by how deftly and easily she coped with household chores. Sometimes, during these duties’ performance, she fell into a trance, plunged into samadhi – relatives attributed it to an extreme degree of lack of sleep. 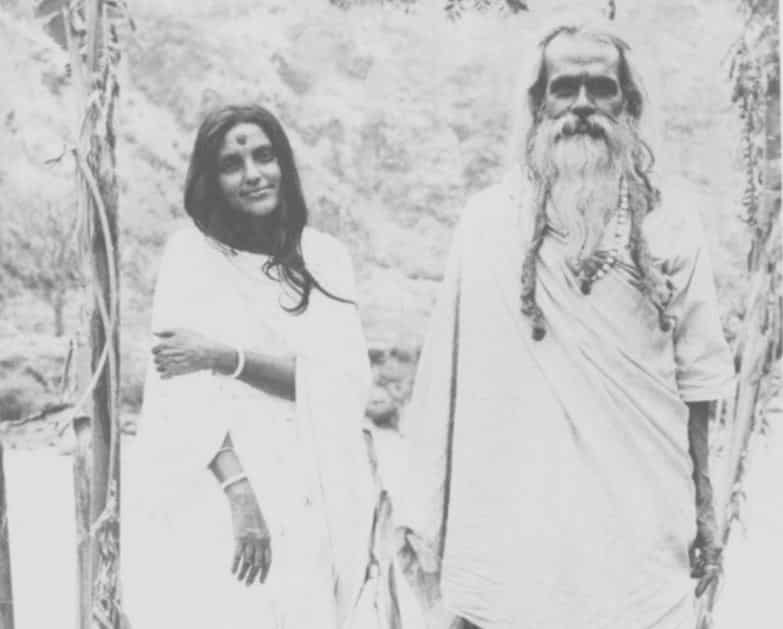 As she turned 18, she moved to live with her husband in Astagram in East Bengal. They never had a marital relationship: once Bholanath approached Ma intending to fulfill his marital duty, a powerful electric shock pierced his body. He took this as a sign that the time had not yet come. Then, in Astagram, the brother of the apartment owner began to treat Ma as a spiritual mother and saint. Around this time, one of Bholanath’s friends also prostrates to Ma, calling her goddess Durga. One evening during a public kirtan, Ma went into a deep trance, which further strengthened people’s opinion about her extraordinary spiritual abilities.

When she turned 20, she became seriously ill and returned home to her parents. Around this time in 1916, it was revealed to her: You are everything. She realized that the whole Universe is “My own manifestation.” I met directly with the One, manifested as multiple. She realized her Divine Essence, manifested in all that exists. She often had visions of different forms of God; she practically ignored her body.

She moved to live with her husband 2 years later in Bajitpur, Mymensingh District, East Bengal. During this period, Ma began to engage in spiritual practices, spontaneous yogic manifestations. When she was 21 years old, her periods stopped forever. She could not do housework either, because constantly she fell into religious ecstasy.

Anandamayi Ma never aspired to teach, she did not have a Guru, and she never turned to the scriptures and books on yoga. Her inner guidance itself manifested ancient Sanskrit texts and sacred mantras that she had never heard of before, as well as images of various aspects of God.

Anandamayi Ma’s body took on challenging hatha yoga asanas, inaccessible to ordinary people, and not having many years of hard training. When asked who her teacher was, she answered: Your Shakti (Divine Power). 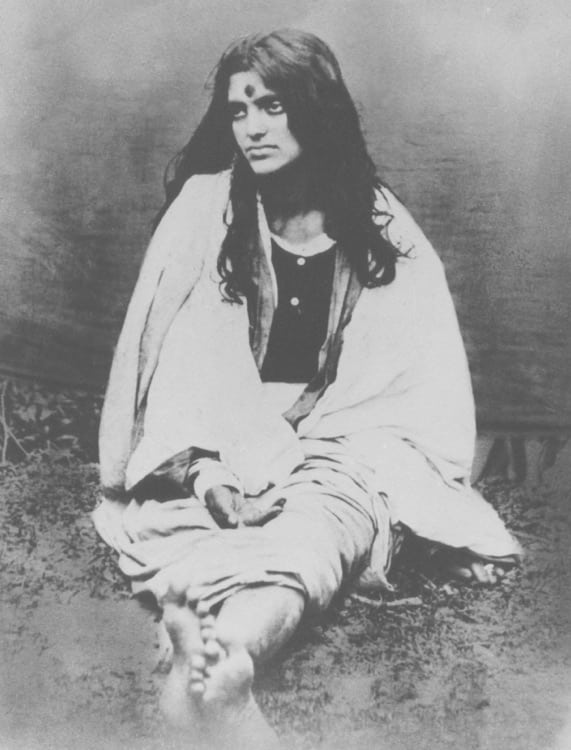 One day on August 3, 1922, the inner Shakti directed her to perform the ritual of self-initiation. She herself played the roles of both guru and disciple, reciting the sacred bija mantra, which she then continued to repeat for some time. A little time passed, and Ma again went against tradition, personally giving mantra initiation to her husband and plunging him into the deepest trance for two hours.

During her initiation, Ma strictly followed the precepts of the ancient texts, although she never studied them. Then she announced to Bholanath and the famous astrologer-scientist that she was an incarnation of God – Purna Brahma Narayana. During this startling statement, she shone with an extraordinary light.

Ma’s spiritual strength grew more and more: she often enjoyed the visions of various forms of God, realizing her complete identity with their essence. She ignored her body, practically did not eat anything, and hardly slept.

After the initiation of Bholanath, she sank into silence for three years, only occasionally interrupting it to comfort someone in grief or to convey some urgent message. Towards the end of this period, they moved to Dhaka, where Bholanath worked as a manager of the Shah Bagh gardens. There were rumors that Ma was a saint.

During her life in Shah Bagh, Ma often immersed herself in samadhi. Its duration sometimes reached twelve hours. During these periods of absorption in God, due to the inner intensity of the divine consciousness manifesting through her, her face became almost crimson. Still, at the same time, every cell of her body glowed with an unearthly light. 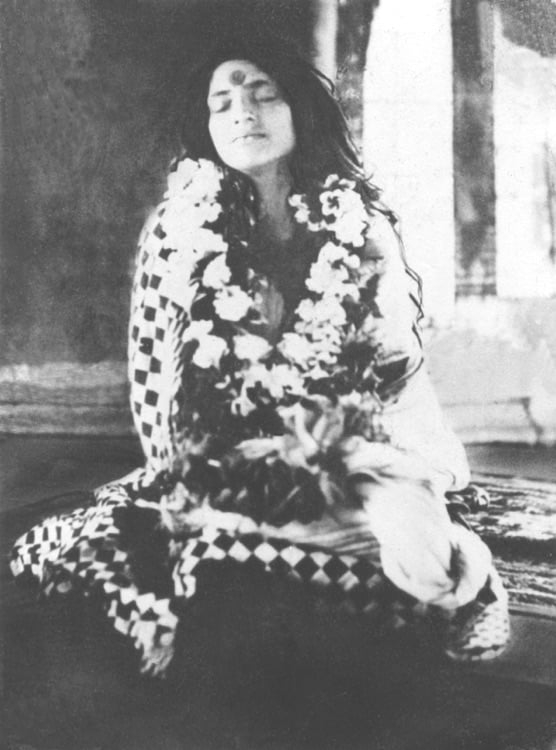 In Siddheshwari, a sacred site in the forest of Dhaka, Ma found an ancient abandoned and an almost completely inaccessible temple dedicated to the Goddess Kali. Beginning in September 1924, she often stayed there overnight, and in 1928 an ashram was built there for her. A year later, a larger ashram was built in Ramna as the number of people who wanted to see Ma grew steadily. These were the first two of several dozen ashrams built by Ma followers throughout India.

In October 1925, Ma ended her silence and began talking to people who came to her little home to take darshan (to see her). There were many Muslims among her visitors. Some innumerable people would come to Ma for healing. To heal others, she inflicted wounds on her body or took on the suffering of others.

One night, Ma, on a pilgrimage to holy places, saved the life of Jyotish Chandra Roy, later known as Bhaiji ( brother). Bhaiji persuaded Bholanatha to give her the name Anandamayi Ma, which means Mother full of bliss. Bhaiji wrote an early biography of Ma, which contains an accurate description of her mystical states and Ma’s personal stories about the internal processes taking place in her.

Bhaiji became the main confidant and protector of Ma and her husband to the public. He has also always been the initiator and organizer of the annual celebrations of her birthday, which made it possible for countless admirers to gather and spend days and even weeks in spiritual unity and joyful communication.

Anandamayi Ma possessed supernatural powers (siddhis) – but for Ma, they were not the goal but were just a side effect of the practices. The main meaning of Anandamayi Ma’s life was the realization of God and helping people who turned to her. She helped seekers find the path to God, awaken in them the desire for spiritual life, conveying the idea that God dwells inside each person, and the whole world is a Divine creation and his play. 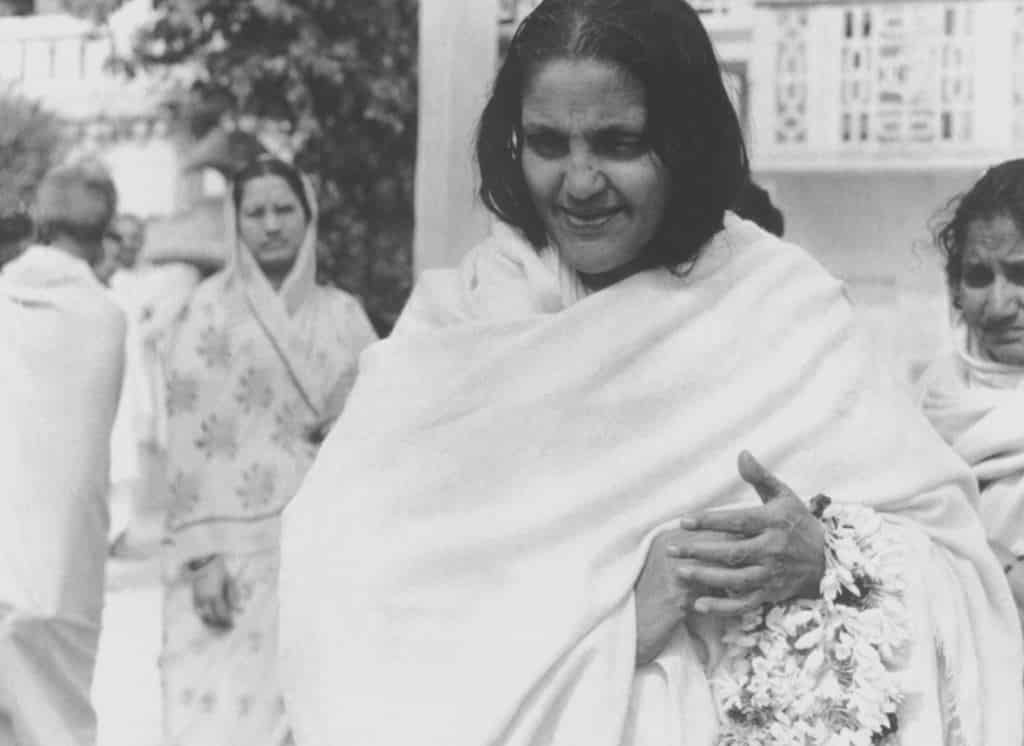 In 1932, Anandamayi Ma moved with her husband to Dehradun, and the number of her followers grew rapidly. In 1933, the wife of India’s future prime minister, Jawaharlal Nehru, visited her through her Mahatma Gandhi and Jawaharlal Nehru learned about AnandamayiMa, who also began to visit her.

The daughter of Jawaharlal Nehru, Indira Gandhi, also visited Anandamayi Ma more than once and treated her with the greatest respect. From that time until her Mahasamadhi, she traveled across all of India, not being in one place for more than two weeks.

Not only ordinary people but also sages and representatives of the authorities, celebrities, scientists revered her as the embodiment of the Divine Mother and came to worship her. By the seventies, her devotees numbered in the millions, including thousands from the West. To her surprisingly attracted not only people but also stray dogs, goats, snakes. Her unconditional love also extended to flowers and various plants, and she definitely felt what they needed.

Until the end of her days, despite her advanced age, Anandamayi Ma continued to travel throughout India and give teachings, remaining, according to her followers, a flying bird. On August 27, 1982, Anandamayi Ma, immersed in Mahasamadhi, left her body in the city of Dehradun.

Indira Gandhi and many people came to her funeral from all over the world.  A white marble temple (Samadhi Temple) was erected at the burial site of the body of the Great Saint Anandamayi Ma, which is now a sacred place for spiritually seeking people.

One day, when Ma was doing Satsang at Kashi Ashram, one of her Bengali disciples asked her – Mother, I pray to my Deity and ask for something. But it seems that God is cruel. What are the means to make prayer more effective?

According to Mother, everything is in God’s hands and his will. We are his tool, and he uses us as he pleases. All there is His; as soon as you realize this, you will be free from any burdens. Surrender yourself to Him and His will, and then nothing will seem to be alien. All will be your own very self.

Do everything for the sake of God.

This body has lived with our father, mother, husband, and all relations. This body has served all those who are related to this body. This body has cooked food, has done household chores, has done all sorts of menial work. So you can refer to this body as a servant or wife or cook. But view this from another standpoint, my father, mother, husband, and all those I have served are the different manifestations of one Supreme Power, our Almighty God.

In the end, you are serving God, and you cook food for Him; you clean for Him. Whatever you did in this body, it was all meant for Him. I had only one ideal in life, to serve God, to do everything for the sake of God.

Happiness in God is only Real.

You tend to see happiness outside with your wife, husband, family, or money, but all these methods of happiness are temporary. They can’t last, but once you find happiness in God, you find real happiness, the eternal one. He is everywhere; he is in everything; he is in you, in your body, in your mind, in your Heart. He is your own Self.

A Guru treats everyone equally.

Saints, sage, and Gurus are like trees. Trees provide shelter to whoever comes to them, whether a child, man, woman, or animal. If you sit under a tree, it will protect you from the sun, and it gives you flowers and fruits. It doesn’t matter for the tree, whoever enjoys its fruits. It provides to anyone who comes and takes it, be it animals or birds or humans. Gurus and saints are like that, and it doesn’t matter who comes to them. They provide equal teaching, guidance and help to show them the right path in their life.

The Life of Swami Sivananda Saraswati

Paramahansa Yogananda – Yogi Who Popularized Yoga In The West