Sati, the youngest daughter of Daksha Prajapati always set her heart on Shiva and wished to marry Shiva since her childhood. But Daksha didn’t like Mahadeva. He believed that Lord Shiva was odds among all the gods, wearing Tiger’s skin, and snake around his neck. Daksha also didn’t like Shiva eating Bhang and Dhatura. In spite of her father rejection, Sati anyhow married Shiva.

Daksha held a grand Yagya and invited all his thirty-three daughters and son-in-law including other gods: Brahma, Vishnu, and Rishis. But then Daksha refused to invite Lord Shiva and Sati in his Yagya. As Sati knew that his father has invited everyone from Devaloka except her and her beloved husband Shiva. She then started crying in agony with Shiva and pleaded to go to Yagya. Although Lord Shiva tried stopping her, the compassionate Lord Shiva told her to go and return fast.

Sati went to the Yagya and asked her parents about why her beloved daughter and son-in-law were not invited. In reply, Dhaksha said, “If I call you I would have to call your husband too and I don’t want him to come to the Yagya. I don’t like that dirty and archaic man coming to the grand ceremony.”

He insulted Shiva in every possible way. Sati could not hear the insulting and ignorant words said to her admired consort and threw herself into the Yagya and killed herself.

Upon hearing the incident Mahadeva got really angry and created a furious sound. Shiva then created two ferocious forms: Veerabhadra and Bhadrakali from his matted lock of hair. Veerbhadra was created to destroy Dhaksha and kill all his army. Veerabhadra appeared so ferocious that his height was too tall to reach the heavens, his complexion was as dark as the clouds, had many arms carrying terrible weapons, and wearing a garland of skulls. Veerabhadra and Bhadrakali were created consecutively to represent Shiva and Shakti energy in fierce form.

Lord Shiva instructed Veerabhadra to take all his army and destroy the Dhakasha. Veerabhadra went to Dhaksha Yagya with the gang of the armies. As the war began, he started chopping down the heads of armies of Dhaksha. All others gods, Rishis limbs were also broken down. As mentioned in Skanda Purana, Lord Vishnu threw Sudarshan Chakra on Veerabhadra to kill him. But then, he was so powerful that he swallowed the most powerful Sudarshan Chakra.

Lord Shiva could not bear the grief of Sati. He took the lifeless body out of Sati from Yagya and started roaming around the universe carrying her in his back by neglecting his roles and responsibilities.

After the huge destruction in the Yagya, all gods and Rishis went to Brahma to ask for help. Brahma reminded them that Shiva is the only creator of the whole universe and consulted them to make peace and harmony with Lord Shiva. Brahma along with them went to Kailash and pleaded Shiva to forgive Dhakasha and repair the broken limbs of gods and Rishis.

Vishnu and Brahma both knew that an incomplete Yajna was impending and needed to be complete. They both went to Mount Kailash and Lord Brahma asked to forgive the behavior of his son and pleaded for his son life. The compassionate Mahadeva felt pity for Prasuti (Daksha’s consort) and restored his brunt head with goat’s head. He also repaired the limbs of Gods and Rishis and made it as an original. Shiva calmed down and gave the permission of Yaga to be completed.

Dhaksha then felt pity for his own ignorance and invited Lord Shiva to the Yagya to complete it. In presence of all other gods and Lord Shiva, the Yagya was ritually performed. Since that day onwards Dhaksha became the great devotee of Lord Shiva. 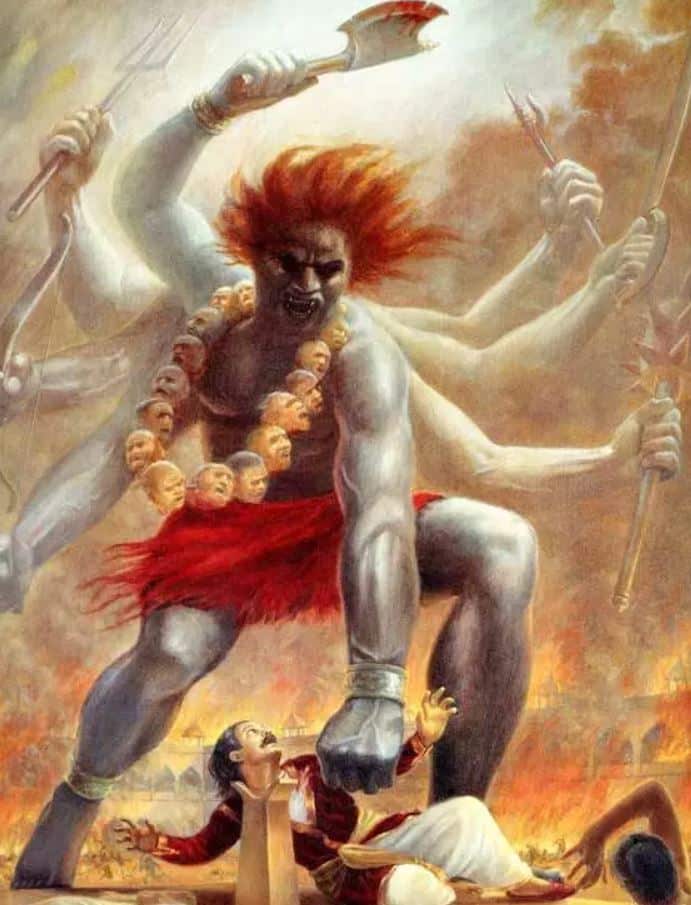 The two famous temples in India dedicated to the Veerabhadra are.

Situated in the small village called Lepakshi in Anantapur district of Andhra Pradesh, the temple was built in the 16th century. The architecture of the temple follows  Vijayanagara style. About 200 meters away from the main temple, there is large Nandi (bull), the mount of Shiva. The main temple is divided into three distinct sections: Mukha Mantapa or Natya Mantapa or Ranga Mantapa. The temple is supposed to be built by two brothers Virupanna Nayaka and Viranna, the Governors of the Vijayanagar Empire during the reign of King Achutaraya, at Penukonda.

It is situated in the bank of the holy river Krishna in Yadur of Belgaum District, Karnataka, India. It is approximately 94 kilometers from Belgaum. The temple was built by the Veerashaiva saint of Karnataka Shree Kadsiddeshwar in the 12th century.

Later, Lord Vishnu used his Sudarshana Chakra to cut the body of Devi Sati to pieces, which fell down on Earth. The total pieces were 52 and they fell on 52 different places, and all these places are known as holy 52 Shakti Peeths. Later, Shiva returned to Kailash and Goddess Sati returned in another life by taking birth as Goddess Parvati.

The Meaning Behind Every Symbols of Lord Shiva 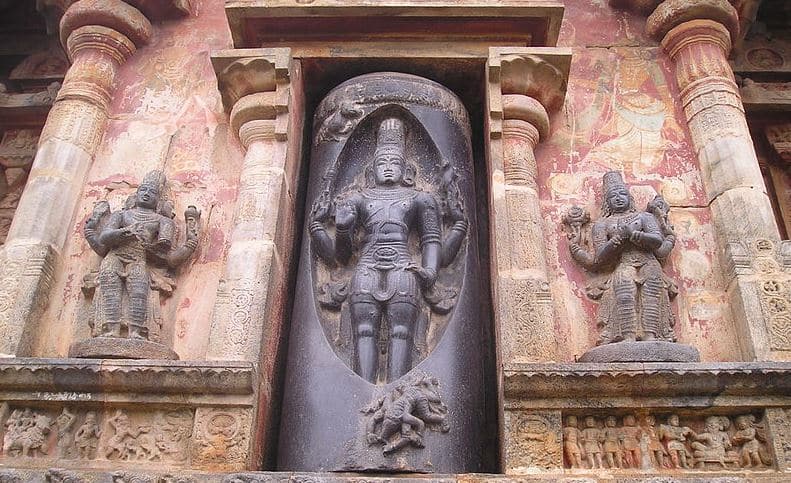 The Untold Mystery of Lord Shiva and Shaivism in Vedic Texts 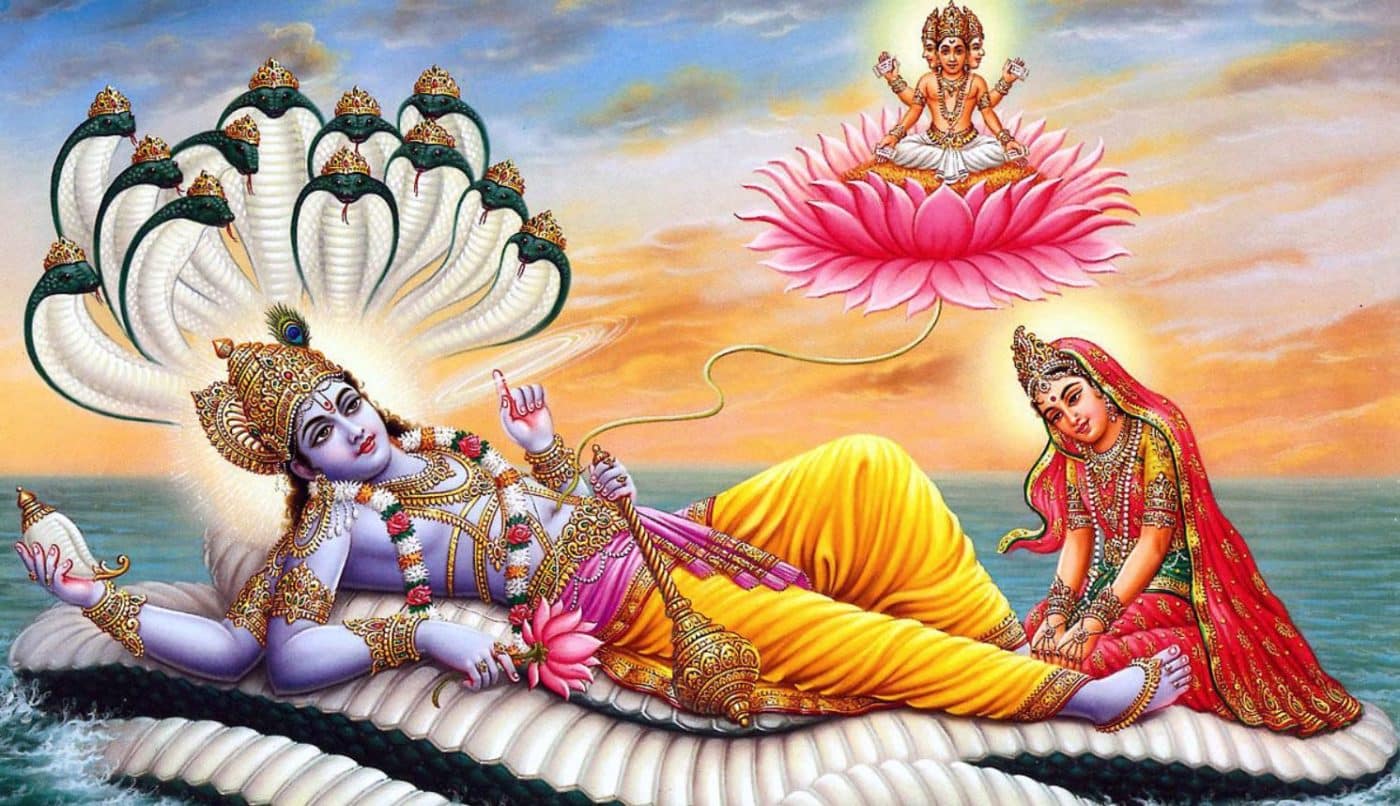