Lepakshi is a small village in the east of Hindupur city, in Anantapur District of Andhra Pradesh. ‘Le Pakshi’ meaning ‘Rise, O Bird,’ a word uttered by Lord Rama when a giant bird ‘Jayatu’ was dying in his hand, who tried to save Mata Sita from the abduction of Lanka-King Ravana.

Jayatu fought bravely with Ravana but was severely injured to death thus, fell into the present-day Leepakshi. Since that very day, the name Leepakshi got stuck in this place. There are other legends related to the name and this place, but this one is the widely famous one.

Aside from the above-mentioned legend, the village is admired for its cravings and architecture reflecting Vijayanagar style, dated back to the 16th century. And one of the artistic wonders of this place is the temple of Veerabhadra.

What makes this temple outstanding is the creativity and devotion of two talented brothers; who used to serve the king of the Vijayanagar Empire. This sacred place is one of the most visited religious sites in India. The beauty, architecture, and paintings of this temple call not only religious people but also sightseers.

The temple was built in 1530 by the governors of Vijayanagar Kingdom, Virupanna Nayaka and Viranna Nayaka, who were brothers by blood in relation. This happened during the reign of King Achutaraya Deva Raya. It is said that Virupanna generated the idea of constructing the temple to keep the mythical memories of this place and honor his patron deity “Veerabhadra.”

Regardless of history, local people believe that the temple of Veerabhadra was already in existence before the 15th century. Folk tale further states that, after finding the trace of deity Veerabhadra’s sculpture, they (Virupanna and his brother) started making additions to the temple. It is said that the government covered the cost of building this temple.

However, in the verse of making the most beautiful temple in Leepakshi, Virupanna almost emptied the state treasure without the king’s knowledge. The temple was almost ready when the king came to know about the utmost spending of the country’s treasure. Thus, he ordered to rip out the eye of Virupanna as a punishment.

However, claiming to be the faithful ally of the king and being said to be accused of the false charge, Virupanna dutifully carried out the order by himself and ripped off his eyes. Since he was sad, he dashed the ripped eyes in the temple wall, which marks are still seen today. Because of this incident, the Kalyana Mantapa of this temple remains unfinished.

The temple seems plain from the outside, but hidden treasure can be seen only when one enters the temple. The temple is of Dravidian Style (Vijayanagar Architecture Style), which is divided into 3 sections named: the Natya Mantapa or Mukha Mantapa (the assembly hall or dance hall), the ‘Artha Mantapa’ (antechamber), and the ‘Garbagriha’ (the sanctum sanctorum), and Kalyana Mantapa with 38 grand pillars.

Mukha Mantapa/Natya Mantapa is made up of beautiful pillars with figurines in various dancing poses. The central ceiling of this hall rises to 20 feet in the shape of a lotus. In the Artha Mantapa is the fascinating mural paintings that keep everyone spellbound. The paintings of this temple are one of the most extensive and well-preserved examples of historical art in southern India.

The mural paintings in the temple ceiling are said to be Asia’s largest painting, measuring 23×13ft., depicting scenes from the epic Ramayana, Mahabharata, and Puranas.

In the entrance of Garbaghriha, presiding the large statue of Lord Veerabhadra, lies the figurine of goddess Ganga and Yamuna. The sculpture of Veerabhadra is fully armed and decorated with skulls. The other three shrines in the western part of the pradakshina surrounding the main shrines: Ramalinga Shrine, Bhadrakali Shrines, and Hanuman Linga shrine, all facing east.

While going around the temple, on the left of the temple wall lies the sheltered corridor where visitors or pilgrims could rest. Each of the pillars shelters carries unique images. The great seven-headed serpents sheltering the Shiva Linga, which is seated in its coils, straight ahead of the exterior.

The exterior also consists of Asampurna/Unfinished Kalyana Mantapa (the wedding hall). This grand hall remains unfinished because of the sad incident of Virupanna causing him to lose his eyes. However, pillars in Kalyana Mantapa still flaunts beautifully, depicting various Hindu gods.

Upon crossing the Kalyana Mantapa, one can see the huge footprint on the temple floor, which is believed to be of Devi Sita. This footprint is always wet because of the water that constantly flows through it. Some also believe this footprint to be of Lord Hanuman. 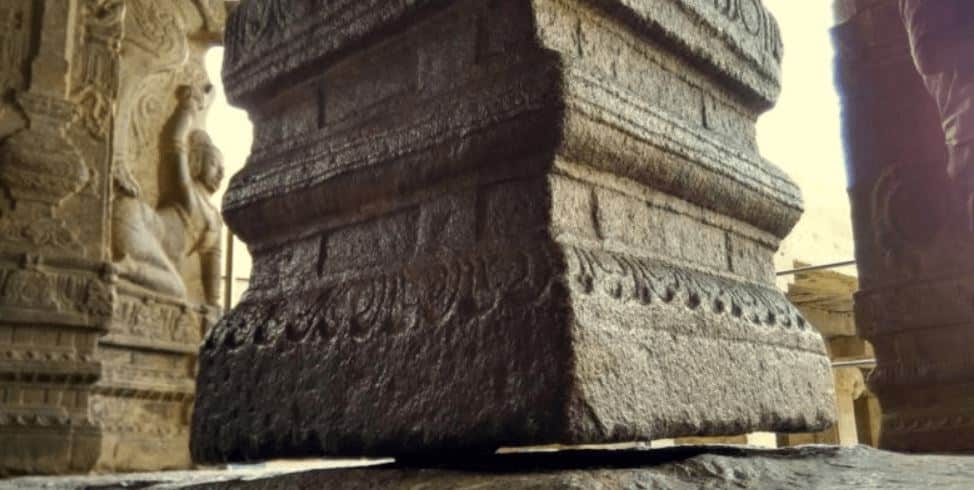 There is a pillar in the Natyamantap of this temple that does not rest fully on the ground. This one is a best-known pillar that honors the engineering genius of the ancient Vijayanagar period. The base of this pillar barely touches the floor, and it is possible to pass the sheet of paper and piece of cloth from one side to the other. However, the pillar is a bit dislocated from its original position, as it was tried to be moved by a British engineer to uncover its secret. 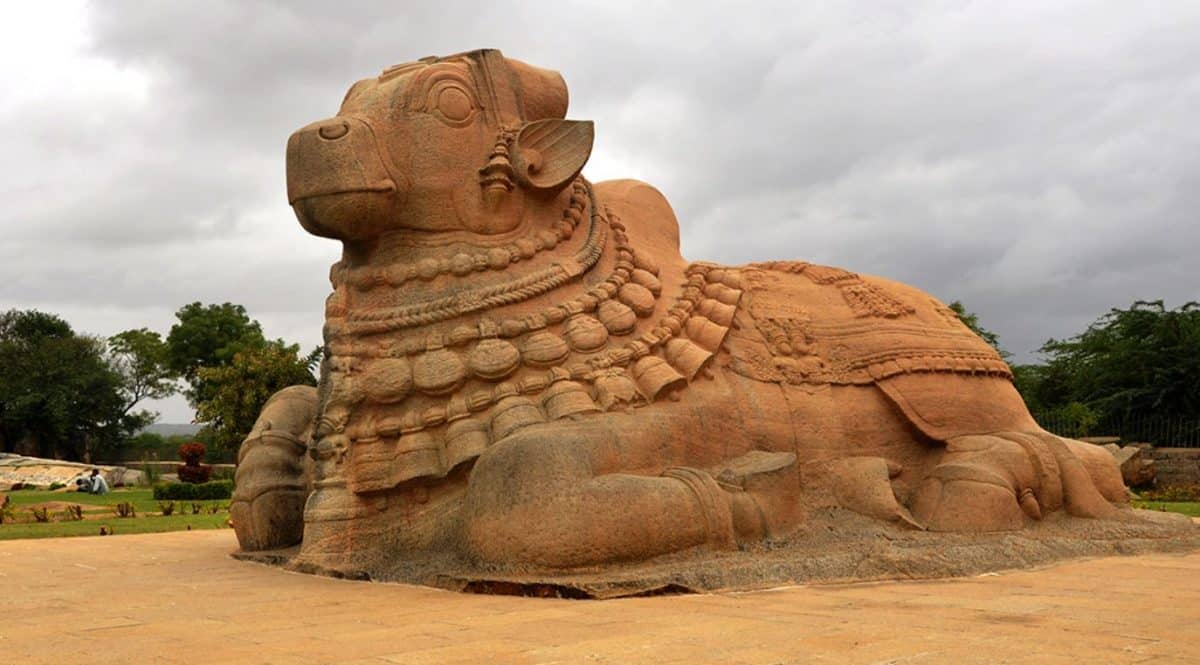 One of the major attractions of Veerabhadra Temple and its complex is the large monolithic Nandi sculpture that lies 1 km before the main temple. It is said to be the biggest statue of Nandi in India. Cut out of a single stone, the statue is about 27 feet long and 15 ft in height.

There are sculptures of various Hindu gods and goddesses in the periphery of this Temple. Though some section of the temple remains incomplete, Leepakshi/Veerabhadra Temple will surely amaze its visitors. One can visit this temple to offer their worship as a pilgrim or can visit the temples like a tourist as per their wish. As one of the most important pilgrims sites of Lord Shiva, this is the most visited and famous historical place in India.