Devi Bhairavi, the fifth of Mahavidyas, is the goddess of creation, maintenance, and destruction. The name Bhairavi means “frightful,” “terrible,” “horrible,” or “formidable.” Devi Bhairavi is a fierce goddess whose name brings fear in all three worlds.

Bhairavi is responsible for creating that is followed by destruction. She is also known as Tripura Bhairavi, which is associated with three lokas or three worlds. 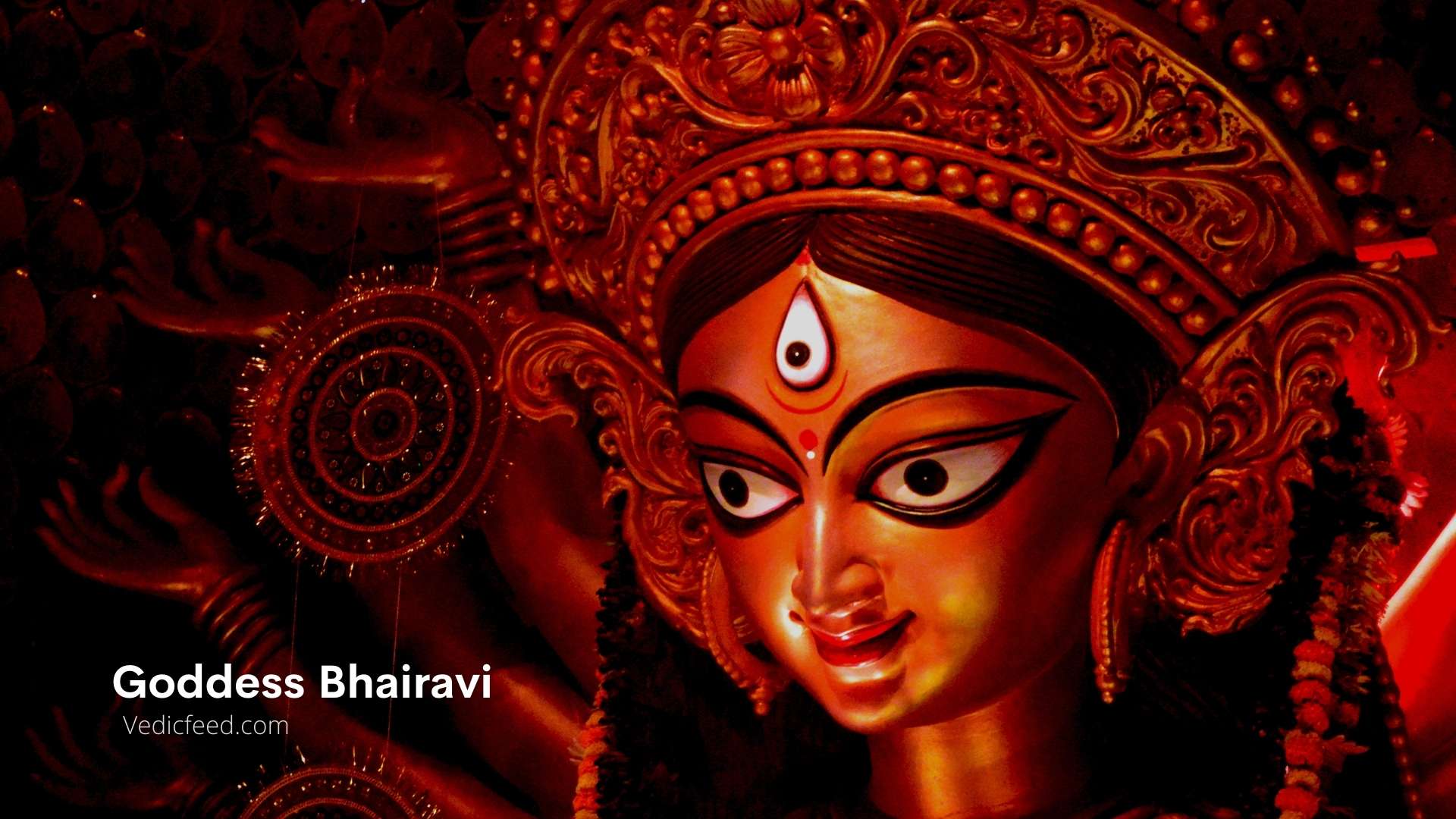 She bears aspects of Agni(Fire), Vidyut(lightening), and Surya(Sun), encompassing gods like Indra, Surya, and Agni. She is the goddess of Kundalini, a divine form of energy situated as the base of the spine. This is also why worshiping Devi Bhairavi almost always consists of meditation which will help awaken Kundalini.

The goddess of destruction is the consort of Kala Bhairava, the aggressive form of Lord Shiva hence also known as Kala Bhairavi. Goddess Kali is known as the most primordial form of energy (Adi Shakti). She is worshiped in ten different forms known as Dasa Mahavidyas, the fifth of which is Bhairavi. That is also the reason she shares so many characteristics with Goddess Kali. She glorifies the supreme power of speech, which is empowered by the ferocity of the burning fire, Tejas.

Goddess Bhairavi is often portraited in a cremation ground doing different kinds of sadhana. Her hair, unlike other goddesses, is not tied neatly, sprawling all across her head. She wears red garments with a garland made up of skulls, just like Goddess Kali. Her one hand is shown, granting us boon and telling us to show no fear. On the one hand, she carries a sword, and on the other hand, she carries a body-less head.

She has dark greyish red skin and blood smeared on her body. She is shown holding weapons such as a trident and a thunderbolt. 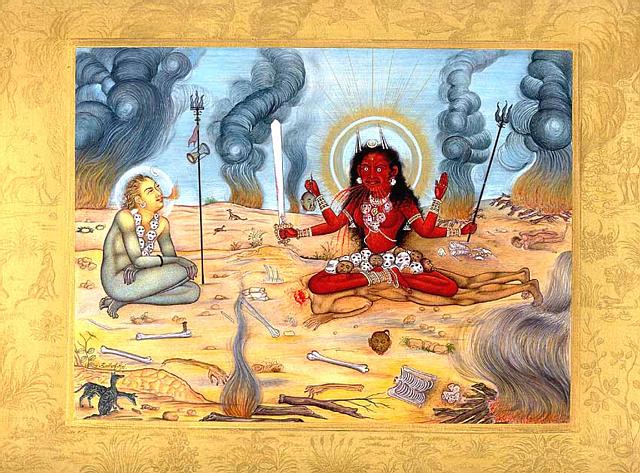 Goddess Bhairavi is often portrayed sitting on a headless body referred to as Savasadhana, which is also a form of meditation. Her two hands are in Abhaya and Varada mudras. Her Vahana is a lion which shows her power on a battlefield. She is pictured either in an ecstatic or a ferocious mood with fangs.

She lives in the patal loka (the world beneath). She is a mysterious goddess, all calm and contained, while meditating on a beheaded corpse shows us how contained she is. In other forms, she is shown as a blood-drinking goddess covered in tiger skin and a skeleton.

One would not want to be on the receiving end of her wrath. Her appearance only makes demons on their knees. The presence of bhairavi is symbolic even in today’s world. She is said to be present in all of our destructive habits, in lust, and our selfishness, and she helps us fight them. She also symbolizes the power of consciousness.

She is a form of great cosmic consciousness and is considered one of the most powerful Tantric Goddesses among Das Mahavidhya. She is a mother who could go through anything to protect her children.

In Tantra Vidhya, she is the raw form of power. She is associated with many tantric kriyas like bhairavi kriya. Those performing these kriyas focus all forms of energy of light, fire, and earth into one. She also has control over reincarnation and one’s movement into three different worlds.

Chatuhsasthi Yogini refers to 64 yoginis. It was a mystical cult in ancient India created for producing divine powers. These 64-yogini considered themselves as servants of Bhairavi. These yoginis had aboriginal traditions. These yoginis were linked to tantrism as they had used to destructive powers of goddess kali and bhairavi. The yogini aspires to control body and mind to control over Panchabhutas, the five elements of nature. It is believed those women could harvest their power of creation via fertility to defy aging and other body processes.

She is worshipped as a chakra with 64 spokes on a wheel.  The worship of ten mahavidhyas gives an immediate blessing, and the person gets blessed with a child. She helps her worshippers get relief from pain and suffering by the loss of family members and other events causing pain and distress.

The Sadhak (worshipper) who perfects bhairavi sadhana gets all Ashtasiddhis, resulting in spiritual progression to master all supernatural power and techniques. She protects us from all harmful and bad influences. 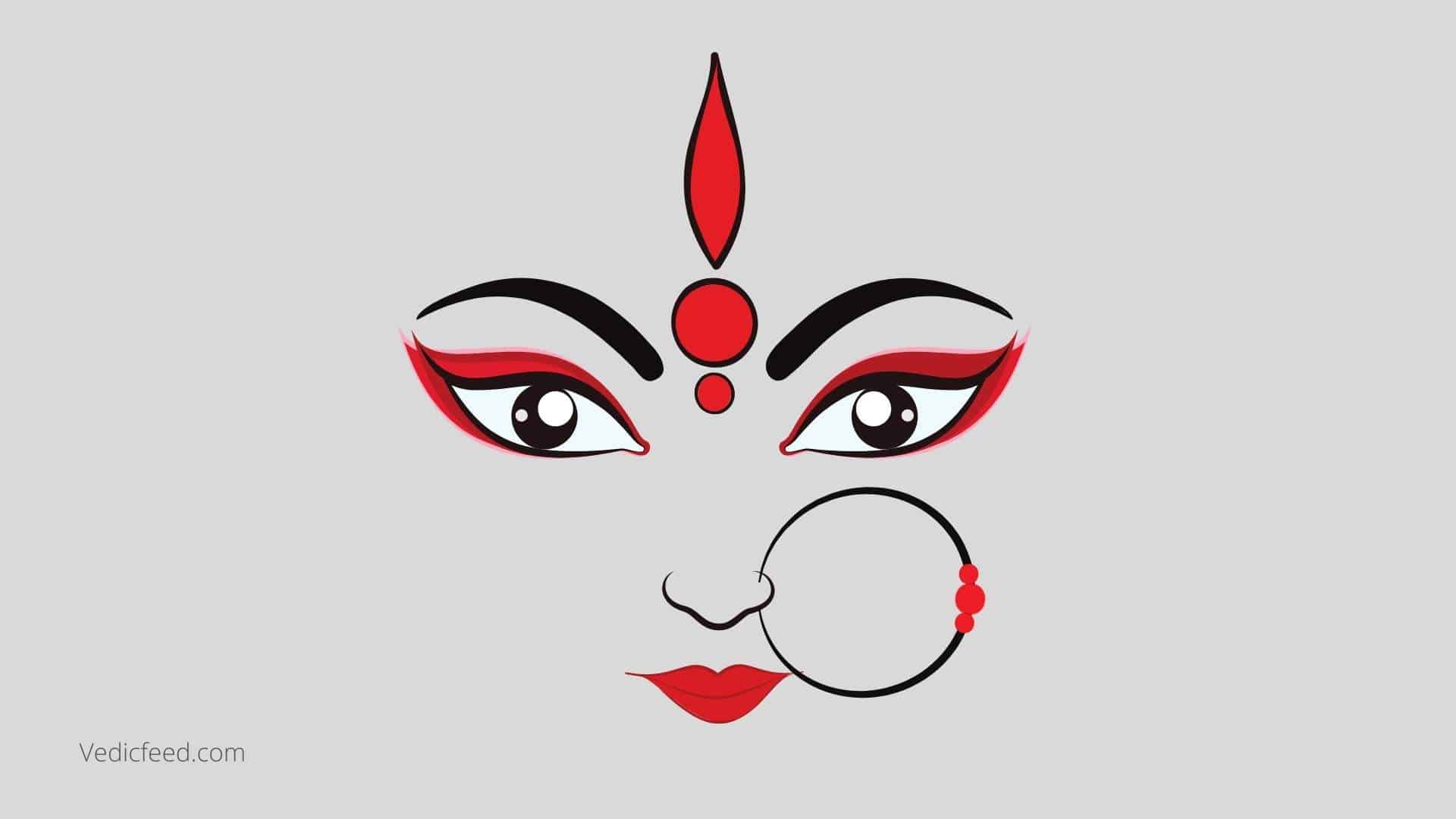 She is a feared goddess by all doers of evil as well as good. Though fearsome, her only motive is to continue the cycle of destruction and creation in this world. She is a mother who has unconditional love for all her children and can go to any limits to protect her beloved. A famous deity in Tantra Vidhya, goddess bhairavi holds a special position in all forms of worship.

Unlike the Trinity-god Brahma, Vishnu, and Shiva, who control one form of life and world creation, maintenance, and destruction, goddess bhairavi has control over all three aspects of life. She is a fierce form of the goddess, but she has great consciousness, which is remarkable. She dispels negative forces that try to curb spiritual growth.