The Goddesses in Hindu Dharma are often depicted as the powerful, radiant beings they are. They are beautiful, celestial, with virtues such as grace, nurturer, knowledge, wealth etc. One such form of the Goddesses is different from the rest, smoky complexioned riding a chariot with a flag bearing a crow- Dhumavati. 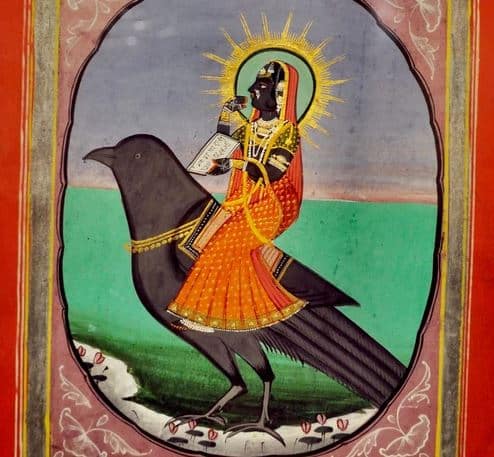 Seventh of the 10 Mahavidyas, Dhumavati personifies the dark side of life. Her name means “she who is made of smoke.”

How Goddess Sati became Dhumavati can be explained by this story. It is said that Sati had extreme hunger pangs. She was so hungry that she asked Lord Shiva to get her something to eat. But he refused, as he is not a householder. She had to repeat the request but it went unheeded. She was so famished that she devoured Him! Once she had swallowed her husband, He was upset. He requested her to let him out. She did with a lot of hesitancy. Shiva had no other option but to curse her. He said she would become a widow and undergo all the things that a widow goes through! When Sati heard of this there was a lot of smoke emitting out from all over her body. Her entire beauty was now enveloped with the smoke. She became ugly and looked like a widow indeed. She would now be called Dhuma (smoke) or Dhumvati. The Goddess separated from her husband and lived in a solitary existence. She prefers the crow and her new abode became the cremation grounds.

She is loosely related to the two other Goddesses –  Goddesses Nirriti and Jyeshtha, Alakshmi. 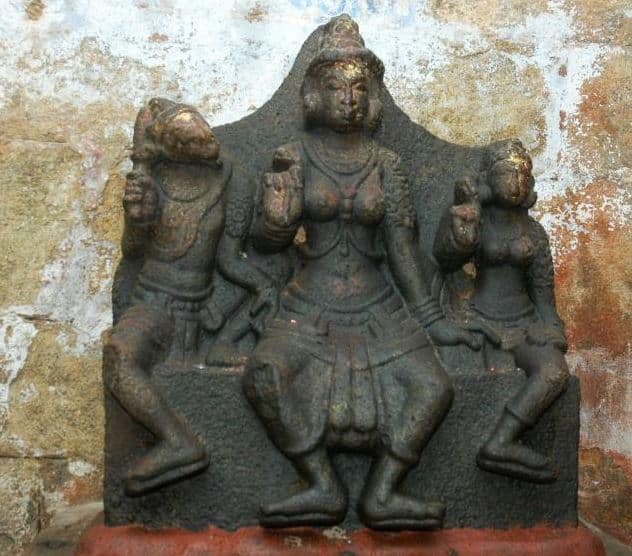 The goddess Nirriti can be found in the Rigveda. The early seers envisioned a principle of cosmic order and universal moral law that they called rita. The moral dimension of rita later came to be called dharma. The name Nirriti is a negation of rita. Whereas rita denotes order, growth, abundance, prosperity, harmony, well-being, and the goodness of life, Nirriti is the opposite. She personifies disorder, decay, poverty, misfortune, dissension, sickness, and the whole range of life’s ills, culminating in death.

Jyeshtha, whose name means “the elder” represents the state of decline that comes with old age. She is and naturally depicted as an old woman. She is instinctively drawn to households in which there is strife—where family members quarrel or where the adults feed themselves and disregard the hunger of their children.

Alakshmi- indicates that she is everything that Lakshmi is not. She is Lakshmi’s dark mirror image. She stands for poverty and bad luck and all the miserable things that can happen to people.

Goddess Dhumavati is depicted as an old and ugly widow. She is thin, unhealthy with smokey complexion. Unlike other Mahavidya(s), She is unadorned with jewelry. She wears old, dirty clothes and has disheveled hair. 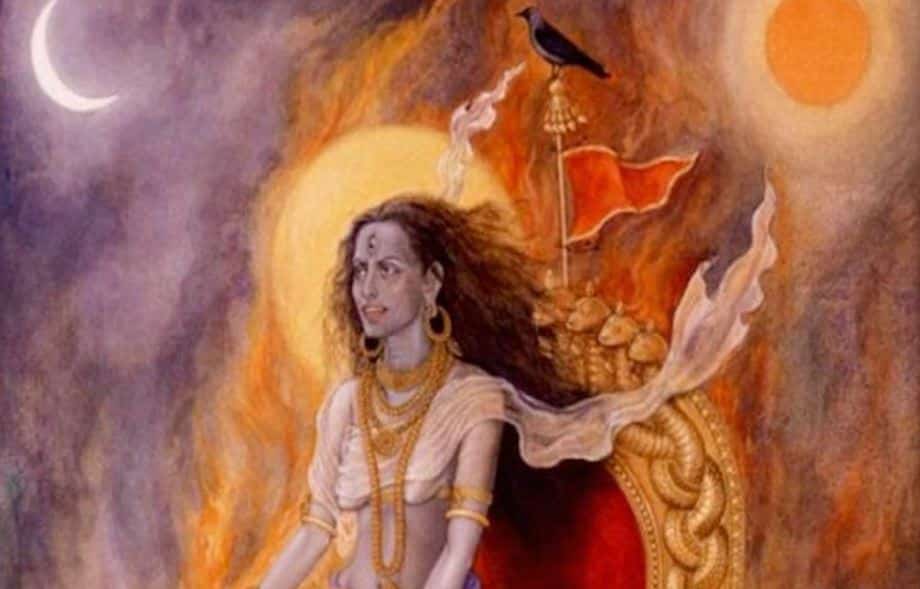 She is the only one of the Mahavidyas without her consort.

It is said that when the earth was under pressure of water the Divine mother manifested as Dhumavati. When she left she was called Alakshmi- ie without any light or radiance. She is an old woman who is sad, angry and also unsteady. Her teeth are bad and breasts are limp. There is no heavenly energy surrounding her. She has a basket in one hand and wears dirty clothes. She also is shown carrying fire pot. Her nose is shaped like that of a crow beak. She is dark and looks cruel. She also has greying hair, torch in hand and a broom. She has tamasic tastes. She looks always hungry and thirsty. Her negative energies provoke sadness, fights, divorces, conflicts and never-ending quarrels. She enjoys liquor and also flesh. She is always in a depressed state. Looking at her one wishes to be detached. She is capable of destruction. Since she moves on despite her husband, she shows that if a woman chooses she can remain independent.

A common feature is an association with a crow. The crow sometimes appears emblazoned on Dhumavati’s banner; sometimes it sits atop the banner. Occasionally the bird is shown as huge, serving as her mount (vahana). In some illustrations a flock of crows accompanies her. In any case the crow, as an eater of carrion, symbolizes death. It is a fitting companion for a goddess of misfortune, decay, destruction, and loss.

In the context of traditional Indian society, the fact that widows can be socially marginalized.But widows are also free to follow a spiritual path, to go on pilgrimages, and to engage in sadhana that would have been impossible during the years of family obligations. No longer constrained by the demands of the married state, they are in a position to apply themselves wholeheartedly to spiritual practice. There is an implied parallel here between the enforced position of widowhood and the voluntary state of renunciation known as samnyasa.

It is universally acknowledged that something that seemed painful or unfortunate at the time might have been for the best after all, in short, a blessing in disguise. Most of us need look no further than our own lives or the lives of people we know for examples of disappointments, misfortunes, frustrations, defeats, or losses that led to positive transformation. Similarly, adversity can build character and turn an ordinary soul into an extraordinary one. 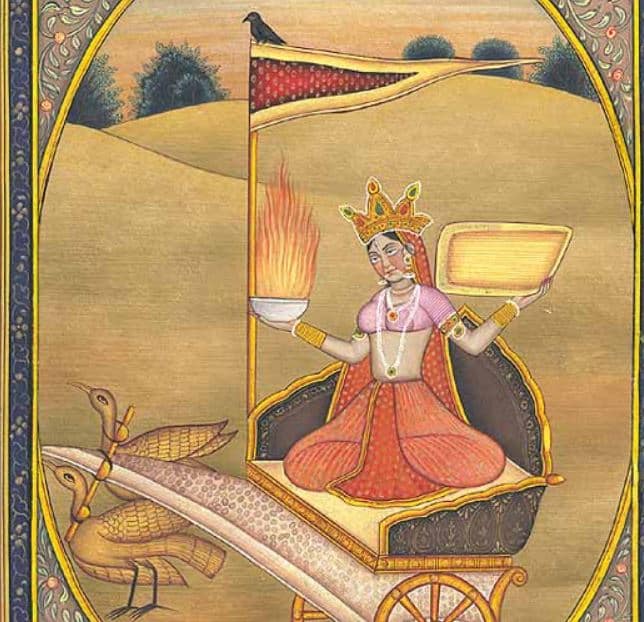 Dhumavati holds a bowl of fire in one hand and a winnowing basket in the other. The fire symbolizes inevitable cosmic destruction: all things shall pass away. The winnowing basket, used to separate grain from the chaff, represents Viveka, mental discrimination between the permanent and the fleeting. Even though her stalled cart represents an external life going nowhere, Dhumavati empowers us inwardly to reach for the highest, and there is nothing to stop us once we are resolved. In the end, she points the way to liberation.

Dhumavati temples are also very rare. The most famous temple of Goddess Dhumavati is located in Varanasi where the Goddess is worshipped with very unusual items. She is offered fruits, flowers along with meat, bhaang, liquor, cigarettes and sometimes even blood sacrifices.

Dhumavati is described as a giver of siddhis (supernatural powers), a rescuer from all troubles and granter of all desires and rewards, including ultimate knowledge and moksha (salvation).