These Hindu temples in the list below opens only once in a year.

The Temple of Rani Pokhari

Originally known as Nhu Pukhu, Rani Pokari in English means Queen’s pond. Built in the 17th century, the pond lies in the center of the capital city of Nepal, Kathmandu and standing in the center of the pond lies the temple dedicated to Matrikeshwor Mahadev, a form of the Hindu deity Shiva. Open only once a year in the fifth and final day, “Bhai Tika” of Tihar (Deepawali), the devotees visit the temple walking through a causeway that bridges the streets and the temple surrounded by water. On this day, when all Hindu women pray for the prosperity of their brothers and those without their own brothers to pray for go to the temple. 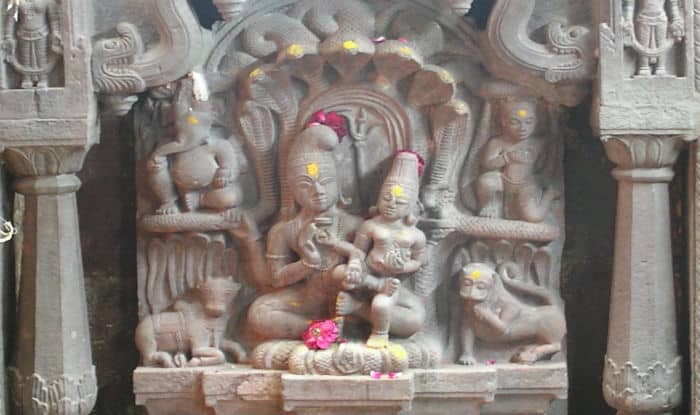 There are many temples of Nagas in India, among which is a unique one, Nagchandareshwar Temple in Ujjain. It situated on the third floor of Ujjain’s Mahakala temple. A wonderful statue of Shiva-Parvati sitting on the seat of a non-spreading Nag resides in the temple. Built in the 11th century and unlike anywhere else in the world, it is said that the statue of Shiva-Parvati was brought here from Nepal. This temple is only opened in Nagpanchami, once a year. It is when, on this day Nagaraj, Taksak is believed to be present in the temple himself. It is believed that this is the only temple in the world with a statue in which Lord Vishnu is sitting on Lord Bholenath.

The Lingeshwari temple is situated in Jagdalpur, Chattisgarh. There are numerous beliefs surrounding this temple. It is said that couples willing to have a child will have their wishes fulfilled after visiting and praying here. Legend says that the curtain of the temple was opened by Lingeshwari mother on the five sand-marked trails, where future happenings are seen. It is considered a symbol of war or strife if the marks on the sand cat’s paws mark the cracking of famine.

Opened once a year for Chithrapournami celebrations during the month of April and May, it is a 1000-year-old temple made of huge pieces of granite, which stands at an altitude of 1337m above sea level. On this full moon day of opening, priests of Tamil Nadu and Kerala conduct ritualistic prayers at the temple. Being situated on a 12-kilometer stretch to be covered by dense forests of wildness and the enchanting beauty of nature. The temple is located at the border of Kerela and Tamil Nadu, 7 km away from Pazhiyankudi in Theni district and 15 km from Thekkady in Idukki district, it can only be reached by a jeep. The temple is under an eternal dispute of authority between two states. Therefore, to avoid clashes, the temple remains closed except on the day of annual festivals.

The temple which is situated near the village called Srimoola Nagaram, in the banks of Periyar, has two temples inside the temple itself. One is dedicated to Lord Shiva that faces east and the other one is dedicated to Goddess Parvati which is facing the west. While Lord Shiva’s temple is open all round the year, the temple of Parvati is open only for 12 days in a year. People willing to get married or have a child visit the temple of Goddess Parvati for prayers in that period of two weeks. Many devotees from all parts of Kerela visit the temple during that time of the year.

Constructed in an ancient Kalari form, the temple opens every year on Malayalam month Kumbham 1st and closes on 30th. It is located at Ernakulam, in Thrissur district. Legend has it that, Parvathy Devi of Airanikulam temple arrives at to collect tax from land owned by this temple during Kumbham month for 30 days. A flower, one rupee coin along with last used sindoor and turmeric powder of the goddess as ‘prasadam’ are placed in a small piece of the banana leaf before giving it to the devotees. If this offering is placed in the pooja room or any other clean place, the goddess will bless that devotee’s home with prosperity, happiness, and her presence.

Hasanamba temple belongs to Goddess of Shakti or Amba, which lies in Hassan, Karnataka. Build in the 12th Century, experts believe it to be an epitome of temple architecture. The doors of this temple open only once in a year for a week, in the time of Deepawali. For the remaining time in the year, the Goddess is left with a lamp lit, flowers, water and two bags of rice as offering until the next year. It is also very interesting as there lies an image of Ravana with nine heads, instead of 10, playing Veena. However, the reason for the unusual image is still unknown.

Built in 1564, the 35m-high temple is dedicated to Taleju Bhawani, the titular deity, or royal goddess of the Malla kings in the 14th century. Situated in Kathmandu Durbar Square of the capital city of Nepal, it is one of the most magnificent temples which stands at its northeastern extremity. It is open briefly to the public on the annual Dashain (Dashera) festival.