In Ramayana, there is a great story about one of its key characters, King Janaka, the father of Goddess Sita, and how he became Rajarshi. This beautiful story of King Janaka takes place in the 7th to 5th  millennium BCE in Mithila (Videha). Mithila was one of the regions of the Indian subcontinent, which was mainly located in the southern part of Present-Day Nepal and the Indian state of Bihar.

Janaka was the King of Mithila who ruled over the Videha kingdom in the 7th century. The ruler of Videha was called Janaka, and the real name of King Janaka was Seeradhwaja. Janaka was childless with his wife Sunaina, but once while plowing the field as part of a ritual, they found a baby girl. Baby girl was believed to be the daughter of the Earth and named her Sita, raised by king Janaka and his wife.

Apart from running his country as a King, Janaka was also a true seeker. He was an enlightened king, and it was a blessing for the people of Mithila to be ruled by the enlightened one. King Janaka had Lord Shiva’s bow, which was later used to choose the best husband for his daughter, Sita. The one who could lift the bow was chosen as a worthy personality who could take care of Sita. The bow was not an ordinary bow, and no ordinary person could lift it and tie the string to the other end except Sita. However, Lord Rama successfully lifted the bow, and that’s how Sita got married to Lord Rama.

Once King Janaka met a 12-year-old boy named Ashtavakra who had a crippled body. Ashtavakra’s father was a great Pandit “Hindu Priest” in King Janaka’s kingdom. He was cursed by his father to have defects in his body. Ashtavakra means having eight bends in the body, “Ashta” is eight, and “vakra” means to bend.

Ashtavakra is considered one of the greatest Guru on the planet who caused a huge spiritual movement. He got all the knowledge about the Vedas and Sastras when he was inside his mother’s womb.

Janaka had a big wish of being an enlightened soul. He could do anything to achieve enlightened knowledge. Once there was a pronounced debate in the kingdom where all the great priests talked about the soul and enlightenment.

Hearing everybody’s debate, Ashtavakra was not satisfied with the explanation, so he stood up and told King Janaka that all the things said by other great priests are nonsense and nobody knows the truth about the soul. Further, he said that nobody, not even his father, knew the truth but thought they acted as if they knew everything. Ashtavakra added that if he wants to know the true meaning of the soul and get enlightened, King Janaka must do everything he asks. The King agreed to the soft tone of Ashtavakra.

Ashtavakra asked Janaka to meet him in the forest as he lived there, so one day, Janaka visited the forest with his soldiers on his horse. He and his soldiers searched for Ashtavakra everywhere in the jungle, and as they were moving ahead, the forest became denser. After some time, they lost their way, and King Janaka got separated from his soldiers. He was traveling alone, and suddenly he saw Ashtavakra sitting in the shades of the tree. He was about to get off the horse, and when his one leg was in the air, Ashtavakra asked king Janaka to stop in that position where his one leg was in the air. As Janaka agreed to do everything Ashtavakra asked for, he obeyed the command and stayed in the same position. It is believed that obeying the command of Ashtavakra enlightened King Janaka, which helped him to become a Rajarshi (A Royal Sage).

King Janaka accepted Ashtavakra as his Guru, returned to his kingdom, and ruled with pride and dignity. King Janaka was a blessing to the people of Mithila as he was the King who was enlightened and did everything for his nation. The conversation between sage Ashtavakra and King Janaka has been documented as Ashtavakra Gita.

Janaka is famously known as a Rajarshi since he turned himself and became Royal Sage by acquiring Knowledge of Vedas and Sastras. It is believed that Janaka also used to get guidance on Vedanta Sastra from Yagnyavalkya, a significant sage in the Upanishads whose lessons are important. Yagnyavalkya checked on Janaka and found that Janaka conveniently learned his lessons and put them into practice. The classes started only when King Janaka took his place among the other followers, as Janaka was one of his favorite students. Later, both King Janaka and Sage Yajnavalkya became the discipline of Sri Ashtavakra.

Spiritually driven, King was always keen on getting divine knowledge and surrounded by wise people. As per his wish, he got his spiritual awakening and development from his Guru Ashtavakra. Being motivated to seek inner solace rather than outward pleasure, Janaka never opts for worldly wealth, and he was detached from all those matters. This is how he became Rajarshi.

King Janaka believed in serving his people. He ruled Mithila, currently known as Janakpur in the land of Nepal, and is still respected for his love for his people. Janaka was the one who developed Mithila as the center of intellectual discovery. He is regarded as a national hero (Rashtriya Bhibuti) of Nepal. 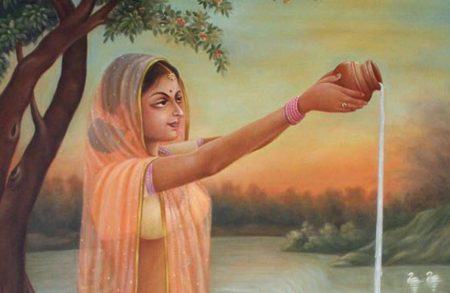