Goddess Sita is one of the most famous goddesses in Hindu history, a symbol of meekness and devotion. She is sung in the Ramayana as the virtuous wife of the protagonist Lord Rama. Since Devi Sita was found while ploughing the field, therefore, Sita is also known as the goddess of arable land.

The goddess Sita is praised as the daughter of the Earth, and also kindness and femininity are embodied in her, therefore she serves as the ideal woman in ancient Hindu history. Sita is considered the symbol of the ideal daughter, wife, mother, and queen. She embodies all the characteristics with which a woman should be described.

Goddess Sita is considered to be one of the incarnations of Goddess Lakshmi. The birth and death of Sita, as well as her whole life story, is very unusual. 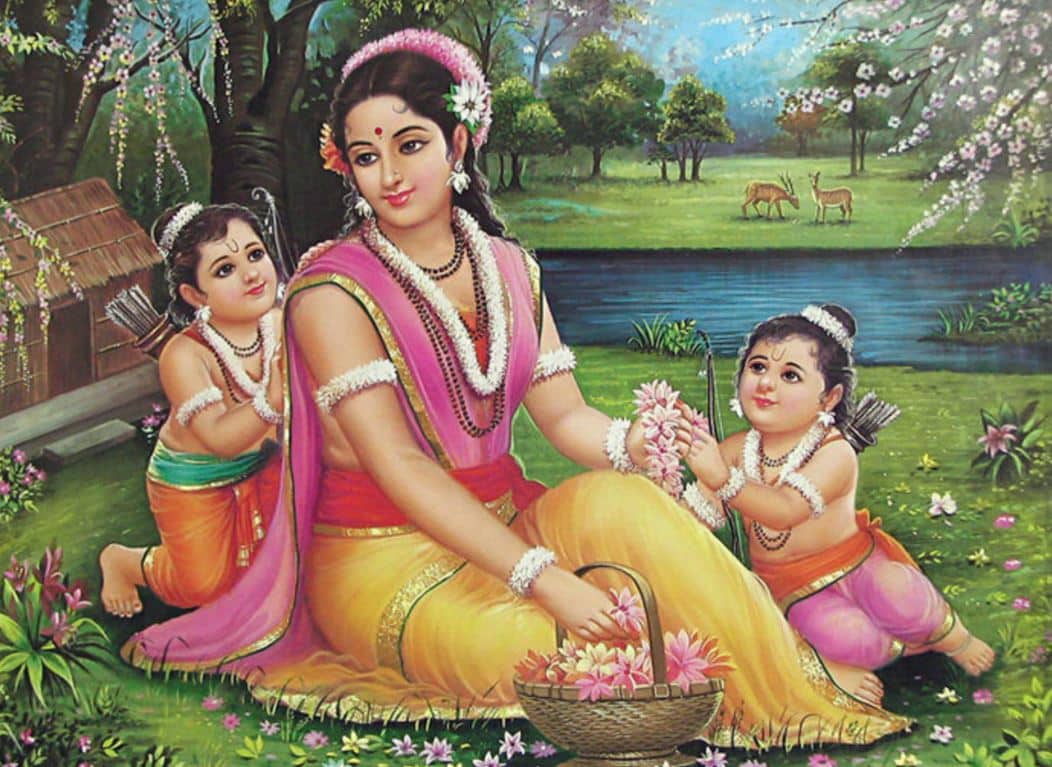 Ramayana describes her birth story in such a way: King Janaka, ruler of Mithila kingdom had remained without children and so he was a little sad, although he was a self-realized saint and wise man. At the same time, Rakshasas and Asuras were creating all sorts of problems on the Earth.

Bhumi Devi, the earth goddess turned to Lord Vishnu and said: Oh Vishnu, please incarnate in this world, help me. Then Vishnu said: Ok, I will incarnate as Rama, my next avatar will be Rama. Also, Lakshmi will incarnate within you. Lakshmi and Bhumi Devi, you two together will take on a human form. So Sita was born out of a furrow, for Bhumi Devi was mother earth. Mother Earth gave birth to a baby of her own accord. This baby was a manifestation of Bhumi Devi and at the same time of Lakshmi.

Janaka, the king, ushered in the ploughing season every year by pulling the plough himself. Back then, farming was particularly important that farming be done with divine blessings.

When the time to plough came, a certain ritual was performed to receive blessings for ploughing and the future harvest. The king also took part and pulled the first plough. While Janaka was ploughing the field, he found a little girl in a furrow. Since no one else knew where the child came from, Janaka adopted the child and named it Sita, born out of a furrow. Because of this supernatural way of birth, Sita is called Ayonija (which means not born from the womb).

Goddess Sita was born in Navami, on the 9th lunar day, in the month of Vaishakha of the Hindu calendar (one month after Rama Navami). Sita is also called Bhumija (earth), Dharanisura (carrier), Parthivi (broad) – all these names are reduced to one and mean the daughter of the earth. Since the father’s name is Janaka, accordingly, Sita was often called by his name – Janaki.

The goddess Sita plays the leading role in the Ramayana. According to the Ramayana, only she was able to move the Shiva Dhanush which was found by the ancestor of Janaka. Therefore, King Janaka decided to marry his daughter to a man who was distinguished by the same strength. To this end, Janaka announces a competition to draw the bow. Anyone who can cope with this difficult task, he promises to marry his daughter.

Many princes tried to draw the bow, but none of them succeeded. Only Rama was able not only to draw the bow but also to break it. Rama fulfilled Janaka’s requirements for Sita to marry. The wedding took place on Vivaha Panchami. Rama married Sita, Bharata married Mandavi. Lakshmana married Urmila and Shatrughna married Shrutakirti.

Exile to forest and Abduction by Ravana 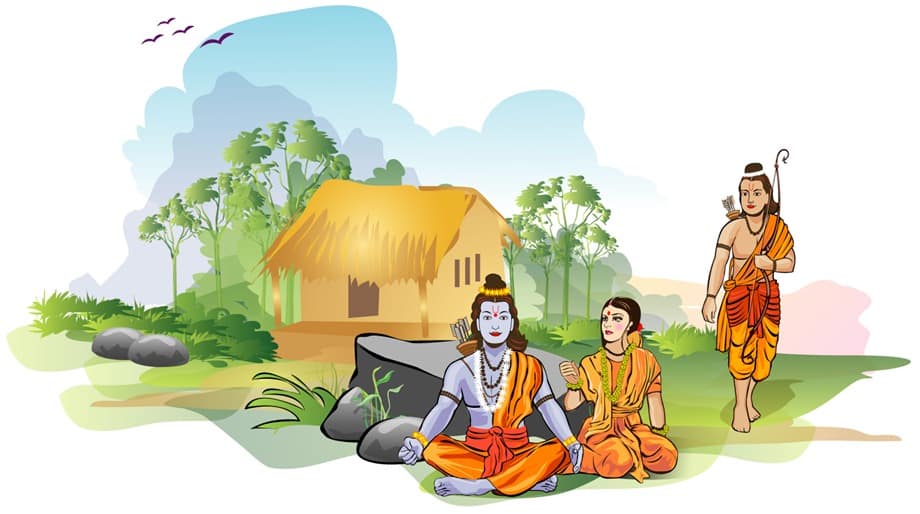 Sita moved to Ayodhya, but after a while, voluntarily agreed to go into exile in the forest for 14 years with Rama and Lakshmana. In the Dandaka forest, Sita was guarded by Rama and Lakshmana. One day Sita took a liking to a golden deer running by, and she asked Rama to catch him. Rama did not return for a long time, and the worried Sita sent Lakshmana to help, being left alone, without protection. Lakshmana drew a protective circle around the hut and told Sita not to go outside. Ravana, disguised as a brahmana, asked Sita for food and, as soon as she went beyond the protective circle, took her to Lanka.

Rama frees her and kills Ravana during the war, however, Rama required Sita to prove her chastity by walking through fire. Because of Sita’s purity, the fire did not burn her, and the coals became lotus blossoms. 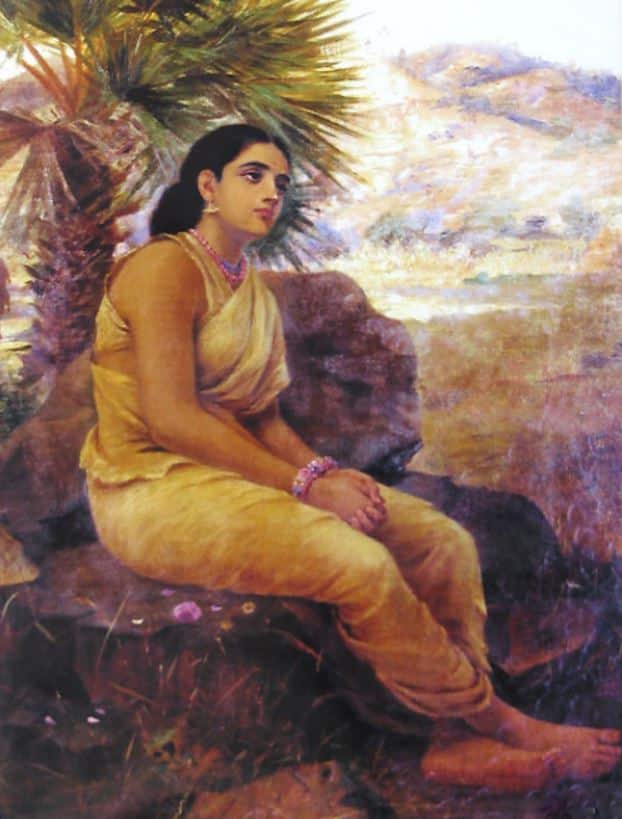 The couple returned to Ayodhya and Rama was crowned by the king. Rama believed in Sita’s chastity, but some of Rama’s counselors and citizens began to talk about her. Sita had to leave the palace, she went to the hermitage of the sage Valmiki and gave birth to her two sons Kusha and Lava. She raised the sons in the hermitage. When they met with Rama one day, he recognized them as his sons. And after that, the earth opened and Sita went back to her mother, the earth. Her body was taken by Mother Earth, and her soul went to Vaikuntha.

Sita means the one who is always connected with Rama. Sita is the power of Rama. Sita is love. Sita is also called the furrow because Sita was found during the ritual of ploughing. Which is to say, Sita comes from the earth. Sita is the goddess of nature.

Sita means that the earth is sacred, that nature is sacred and that you want to feel good in nature. Sita has spent a large part of her life in nature. She was in exile with Rama in the forest. Later she was also in the Ashram of Valmiki in the forest. Sita loved nature and Sita is also considered the embodiment of nature. But Sita is also a joy. Sita also means feeling joy and love, even if the outer life is not so beautiful.