The legendary story of King Mahabali is fascinating. He was an Asura and a big devotee of Lord Vishnu. Still today, he is most popular in the beautiful state of Kerala and was greatly respected in his kingdom as he was considered to be wise, judicious, and extremely generous. Without a doubt, Kerala witnessed its golden era in the reign of King Mahabali, when everybody was happy and there was no discrimination on the basis of caste or class. It as believed that there was neither crime nor corruption, hence, people did not even lock their doors, as there were no thieves in that kingdom.

He was truly a was a great ruler who was immensely loved and respected by his people. The people were very happy and prosperous under his rule. Mahabali was the grandson of Prahlada and the son of Virochana. He was taught the Vedas by his grandfather Prahlada and later by his teacher Shukracharya.

Shukracharya was a very good teacher, hence with his help, Bali soon conquered the three worlds. Through which, Bali defeated Lord Indra, the King of the Gods, and took over the heavens. Shukracharya once called him, ‘Bali, You have now conquered the three worlds but if you wish to always be the Lord of the three worlds, you have to perform 100 Ashwamedha Yagnas. Doing so, you will always be the king of the 3 worlds.’ Bali who respected his teacher accepted in an instance and started about making preparations for the Yagna. Preparations were going on the full scale.

Elsewhere, Indra was lying dejected as Bali had not only defeated him but was also showing the world, how a great ruler should behave. Indra sat beside his mother said the truth and then Goddess Aditi looked at her son and was sad for him. As a loving and caring mother Aditi prayed and started performing penance to invoke Lord Vishnu. After some time the Lord appeared before Aditi. She said, ‘You must already know that Bali has taken over my son’s kingdom…’ Just when Lord Vishnu interrupted softly, ‘Aditi, Bali is a great man and he is a good devotee and he deserves to be the Indra..’ However, Aditi mentioned that without a doubt Bali is a fit king, yet, there are other Asuras to fit the rule as well. Hence, she mentioned that Asuras could fall to their old cruel ways and go back to hurting people. Following which Lord Vishnu looked at Aditi asking for her wish. Aditi smile and wished that Lord Vishnu was born as her son to end Bali’s rule. 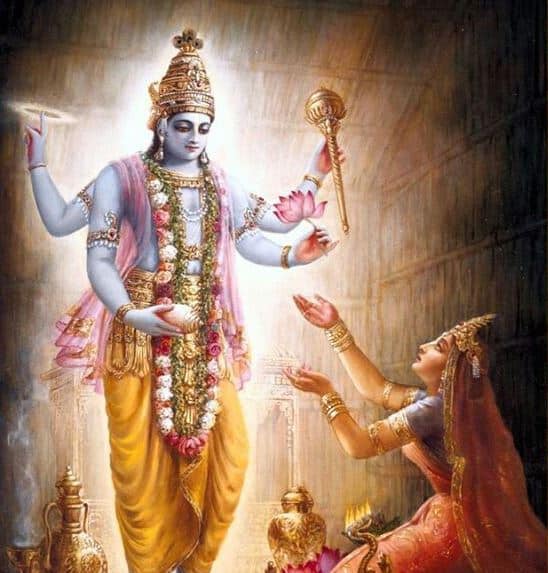 Soon, Aditi and Kashyap were the parents of a black, beautiful short boy who was extremely intelligent, full of pranks, and was the darling of the house. The dark boy was none other than the Vamana avatar of Lord Vishnu as a dwarf. As per the customs, during the age of five, Vamana’s sacred thread ceremony was also performed and was sent for his education. At the same time, Mahabali had performed 99 Ashwamedha Yagna and had to perform just one more yagna after which he could be crowned as the King of the Gods.

Just when the final Ashwamedha Yagna was about to be completed, the entire kingdom saw a handsome dark boy approach the throne. Towards the boy, Mahabali felt a surge of love and got up from the throne and bowed before the boy. Mahabali says, ‘Sir! I am honored that you have come to my hundredth Ashwamedha Yagna. I now feel it will be a success.’ Meanwhile, Guru Shukracharya was looking at the boy suspiciously. While Mahabali asks the boy to wish for anything he wanted.

At the same moment, Shukracharya interrupted Mahabali, who turned around in surprise. The guru nodded curtly and went inside the main hall to a private room. Mahabali hurriedly apologized to the dwarf boy and went to with his Guru. Shukracharya spoke firmly, ‘The boy is none other than Lord Vishnu and has definitely come here on behalf of Indra. However, lost in devotion, it seemed as if Mahabali heard only half of what his Guru had said, ‘Lord Vishnu…!’ and looked like a man in a daze. He was overcome with joy as his Lord had come to ask something. Disobeying the direct words of his Guru, Mahabali goes towards his Divine with a simple devotion, from his heart. Nothing mattered to him anymore.

Mahabali went to the boy again, apologized, and softly asked him for his wishes. The dark boy looked at Mahabali quietly, ‘I want three steps of land, measured by my feet!’ To a surprise, Mahabali expected something big, something like his life, anything but not this. This was too simple as he almost laughed and said, ‘Three steps? Is that all you want? I will give that to you.’ The boy mentioned, ‘If any person cannot be satisfied by three steps of land, there is nothing much he can be satisfied with, your Majesty! That is all I wish.’ The king still felt the same magnetic effect looking at the dark boy and he nodded his head saying, ‘Anything you wish for!’

Just as Mahabali uttered these words, Vamana grew. Vamana grew so huge, that from where Bali stood, he could see only the Lord’s feet and nothing else. Ensuing, Vamana still kept growing so huge that he could cover the whole of Earth with his single step. After that, Vamana lifted his other leg and measured up the entire skies with his next step. Mahabali stood still and astounded watching the Lord Vishnu’s brilliance.

In a clever manner, Vamana called Mahabali and said I have measured the earth and the skies in two steps. I have nowhere to keep my third step. Mahabali understood and smilingly, offered his head as for the third step of his Lord. Lord Vishnu was hugely pleased and gave a melancholy smile and kept his third step on the Asura’s head. Hence, Mahabali was pushed to the Paatala and was removed from his splendor of being the king of the three Worlds. Following this, Indra and the other Devas came back to their skies and were happy and grateful that they had got their kingdom back. 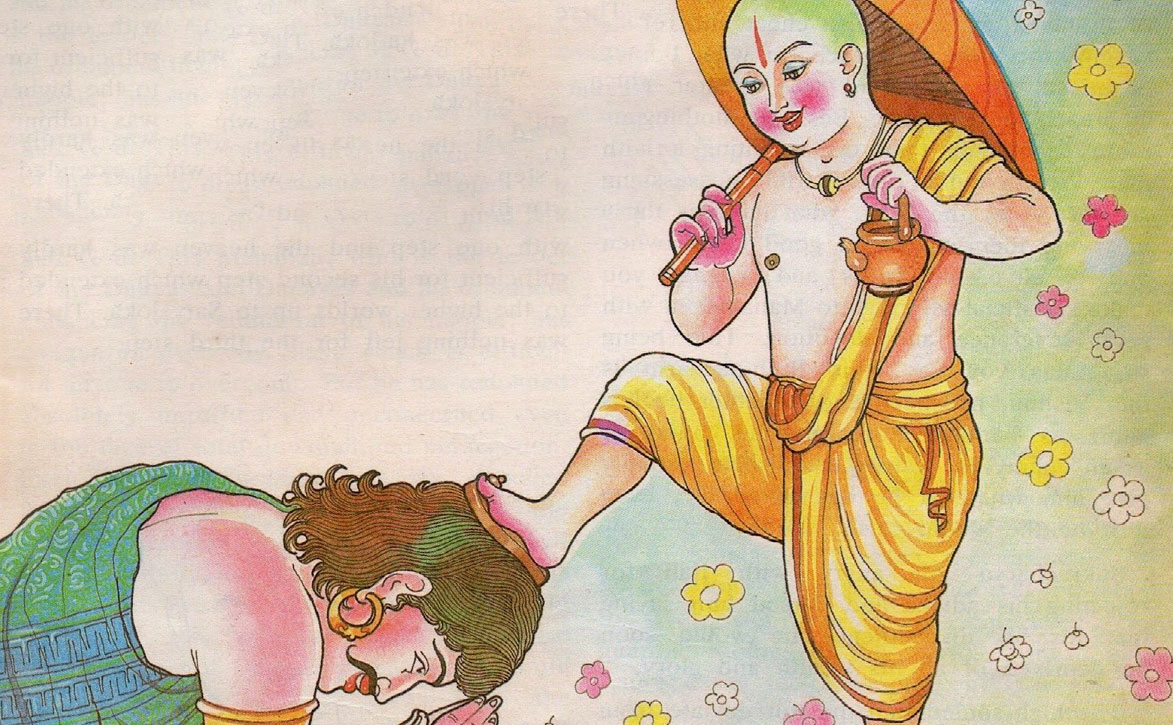 However, Lord Vishnu was perturbed as Mahabali had been his true loyal devotee. So, Lord Vishnu went to the underworld where Mahahbali being an efficient and worthy King was rebuilding his new kingdom. He did not once regret the fact that he was back in the underworld as he had served his Lord and had kept his promise. Mahabali saw a dark man approaching him who offered his service. The King looked at the dark strong young man and agreed to let him stay along as his watchman.

Meanwhile, a very beautiful woman also came up to Mahabali and looked powerful and graceful at the same time. She said to Mahabali that her husband had gone to fulfill some errands and was not yet home. Thus, she asked for protection. Mahabali accepted her as his sister and offered to stay in his palace as long as she wished for. Soon, even Paatala became a very prosperous place, where people lived very happily, without any worries. During when Mahabali relied on the watchman and his sister’s counsel as his kingdom was flourishing.

One day, Mahabali heard the lady saying some prayers and asked her whom her prayers were for. She turned towards Mahabali and said, ‘I am praying for you, my brother!’ Mahabali was moved and said, ‘Whatever you want, I will give you, my sister!’ The beautiful lady smiled and said, ‘I want my husband, Mahabali and you are the only one who can give it to me.’ Mahabali looked confused, just when the lady pointed towards the watchman to show her husband. Mahabali blinked and gazed as the two people vanished. In a moment, Lord Vishnu and Goddess Lakshmi appeared in their places. Mahabali was in total awe as the great Lord had been his watchman and that the Goddess Lakshmi had been with him all these days as his sister. 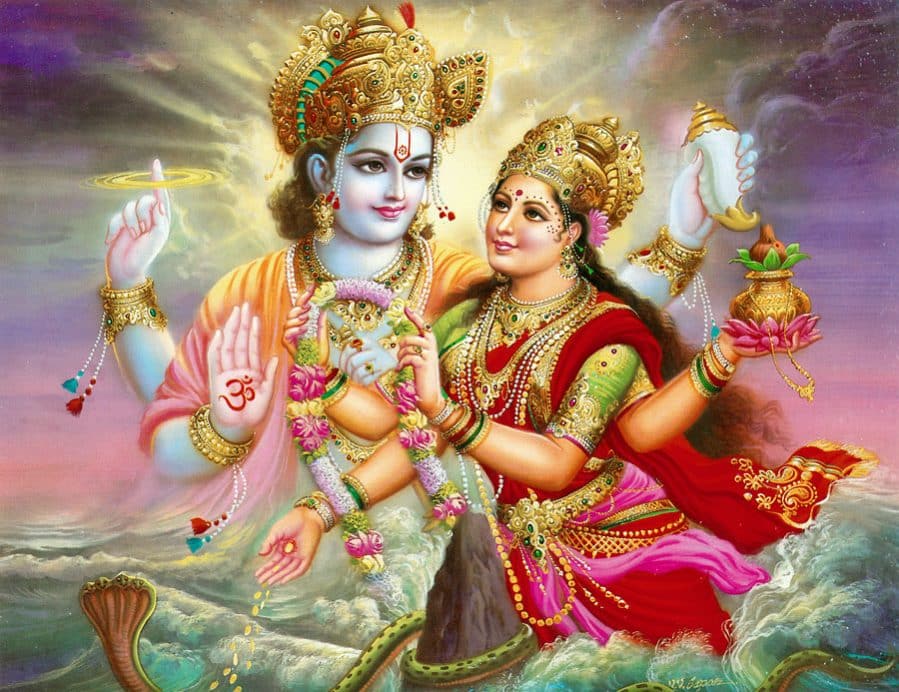 Lord Vishnu told Mahabali that it was his devotion that dragged him to Paatala. Mahabali fell to his feet and looked at the Lord. The Lord continued and told that after this Indra’s rule, he was to be the next Indra. Lord Vishnu promised him that and also asked him to be a good ruler. He also blessed the King and said that even after losing all his worldly possessions, the King would always be loved by Lord Vishnu and his people.

Mahabali then turned towards his sister and asked for forgiveness for keeping her husband from her. He asked her to take what belonged to her. The Goddess thanked him and smiled and told him that Lord Vishnu is always with the people who love him most. Also, she prayed for her bother that he may always be prosperous.

Moreover, Lord Vishnu was moved by the King’s nobility and was pleased to grant the wish. The King loved his Kingdom and people so much that he requested that he be allowed to visit Kerala once in a year. Saying this, both Lord Vishnu and Goddess Laxmi vanished and went back to Vaikunta. 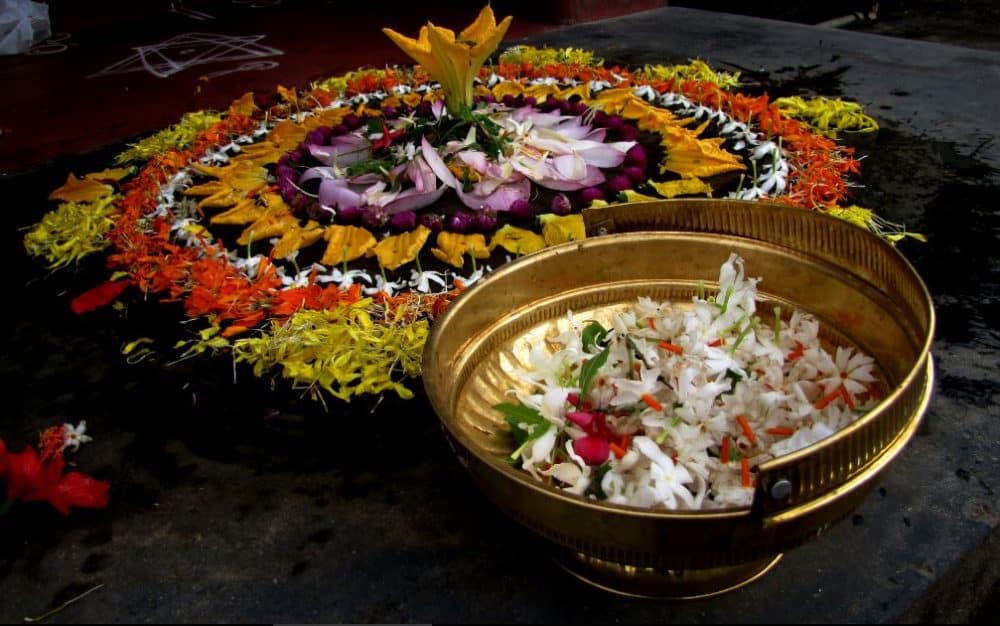 In the end, to this day the day of the visit of King Mahabali to Kerala is celebrated as Onam every year. The festival is celebrated as a tribute to the sacrifice of King Mahabali and every year, people make elaborate preparations to welcome their King whom they affectionately call Onathappan. They wish to please the spirit of their King by depicting that his people are happy and wish him well. The second day, Thiruvonam is the biggest and the most important day of this festival. It is believed that King Mahabali visits his people on the second day. Trikkara is said to be the capital of the mighty King Mahabali where a temple with a deity of ‘Trikkakara Appan‘ or ‘Vamanamurthy‘ who is Lord Vishnu himself in disguise is also located at this place.

Furthermore, the bond between Mahabali and Devi Lakshmi is also said to be one of the reasons for celebrating the Raksha Bandhan, where the sisters pray for the welfare of the brothers and the brothers protect the sisters from any harm.

Mahalakshmi Ashtakam In Sanskrit With Meaning