We all are familiar with every event of the great Mahabharata. In ancient Hindu history, there were two greatest events; one is Ramayana, and the other is Mahabharata. Ramayana is the first poem, and Mahabharata is the longest poem ever written in human history.

Mahabharata narrates the war between Kauravas and Pandavas for the throne of Hastinapur. The war is well known as the Kurukshetra war. One of the most important and respected books, Bhagavad Gita, is also a part of Mahabharata’s great epic.

Today, Mahabharata is popularized by several compiled books, television serials, and movies. So, people of this generation know every event of the Mahabharata. However, there are still some lesser-known facts about Mahabharata, which are;

Ask Astrologer Online
Contents show
Mahabharata was originally named as Jaya or Jayam, Vijaya and Bharata.
Veda Vyasa was not a name but rather a status.
Vidura was the incarnation of Lord Yama.
Abhimanyu was the incarnation of an asura.
A Brahman’s curse was the reason for Karna’s death.
Five enchanted arrows could kill Pandavas
Dhritarashtra and Gandhari took Vanvas (forest exile)
Bhishma knew the true identity of Shikandi.
Originally Subhadra was arranged to marry Duryodhan.
Most Powerful Lord Krishna’s Chariot
Arjuna had four wives.
Eklavya reincarnated as Dhristadyumna.
Arjuna once saved Duryodhan’s life.

Mahabharata was originally named as Jaya or Jayam, Vijaya and Bharata.

Some legends believe that Mahabharata was written by the great sage Veda Vyasa. However, others say that Lord Ganesha was the one who wrote down the words spoken by the sage Veda Vyasa. At that time, the book was called Jaya or Jayam, which means a spiritual triumph.

When sage Vaisampayana (one who taught Yajur-Veda to Krishna) narrated this same story to King Janamejaya, it was called Vijaya, which defines worldly victory. Likewise, the title Vijaya was transformed to Bharata, and finally, the name Mahabharata originated after adding several stories and events throughout the centuries.

Veda Vyasa was not a name but rather a status.

We all know sage Veda Vyasa was the one who narrated Mahabharata to Lord Ganesha. But the sage’s original name was Krishna Dvaipayana; Veda Vyasa was a post given to every sage who had compiled knowledge of all four Vedas. Vyasa in Sanskrit means – arranger or compiler.

Vidura was the incarnation of Lord Yama.

The lord of death and justice was once cursed by the sage Mandavya to be born as a maid’s son because Lord Yama tortured the sage without any valid reasons. So, Lord Yamraj came into this world as a Vidura (the maid’s son). He was the prime minister of the kuru kingdom who embodied righteousness, truth, dutifulness, and wisdom.

Abhimanyu was the incarnation of an asura.

According to Lord Krishna, Abhimanyu was a powerful asura called Kalayavana. Lord Shiva blessed him that no Yadavas could defeat him. Thus, making him capable of killing Lord Krishna as he was a Yadava. However, Kalayavana had a weakness which was an incomplete knowledge of Chakravyuha or Padmavyuha. Knowing the facts, Lord Krishna taught Abhimanyu only the knowledge of entering the Chakravyuha without the ability to exit from it. Thus, it was a plan which Lord Krishna made to kill Kalayavana, who was in the form of Abhimanyu.

A Brahman’s curse was the reason for Karna’s death.

Once Karna was practicing Shabd Bedi arrow – an archery art that can hit its target with the help of sound or words. But unfortunately, he mistakenly hit an arrow on a Brahmin’s cow, thinking it was a wild animal. That Brahmin, furious cursed Karna that he would be killed when distracted. That’s why, when Karna was busy pulling his chariot wheel from the mud, Lord Krishna instructed Arjuna to kill Karna instantly.

Bhishma Pitamaha was one of the mighty and greatest warriors in the Kurukshetra war. He had the potential to end the entire war with his five golden arrows.

Once Duryodhan accused Bhishma that he was not fighting from his heart. Furious with Duryodhan’s accusation, Bhishma took his five golden arrows enchanted with his penance and life force. But, Duryodhan did not believe Bhishma would use it. So, he took those five arrows. However, Lord Krishna knew about those arrows. So, Lord Krishna instructed Arjuna to visit Duryodhan and reminded him about the boon which Duryodhan promised to fulfill. Arjuna then visited Duryodhan and asked for the five arrows as a boon he had promised. Bounded by a promise, Duryodhan had to give those winning arrows to Arjuna unwillingly.

After 15 years of Yudhisthir’s coronation, Dhritarashtra and Gandhari took forest exaltation due to continuous insult of Bhim, which made them sad and depressed.

Shikandi was a female with masculine characteristics, making her an androgynous character. Texts claimed Shikandi was the reincarnation of Devi Amba. Lord Shiva blessed her to be the cause of Bhishma’s death. Bhishma told Pandavas this secret about how they could defeat him in the war.

Balarama- the brother of Subhadra, planned to marry his sister to Duryodhan. But, Shubhadra was already in love with Arjuna. So, she ran away with Arjuna to marry him.

In the Kurukshetra war, Arjuna had Krishna as his charioteer, who was riding a mighty chariot. Throughout the 18 days of the war, the divine chariot was hit by numerous celestial weapons. Lord Krishna depower the effects of those weapons, so it does not affect the chariot until its purpose is fulfilled. Therefore, with the end of Mahabharata, Lord Krishna advised Arjuna to leave the chariot first. Soon Arjuna came down of the chariot; it exploded like a giant fireball.

Eklavya was the cousin of Lord Krishna as Eklavya’s father was brother to Vasudeva (Krishna’s father). Lord Krishna killed him during Rukmini Haran. Later, he incarnated as Draupadi’s son to avenge Guru Dronacharya for all injustices he had done to Eklavya in his previous life. 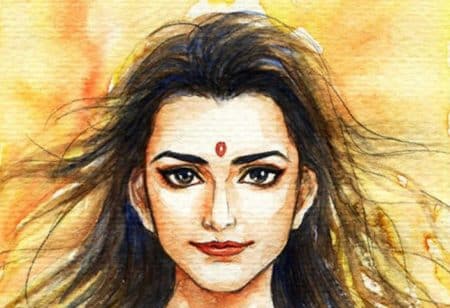