Ganesha Mantras are full of energy and the power of Ganapati. Reciting with genuine devotion, like any other Mantras, Ganesh Mantra gives you positive results removing obstacles.

Lord Ganesha is the son of Lord Shiva and Goddess Parvati and the formless Divinity – encapsulated in a magnificent form for the benefit of the devotee. He is God of knowledge and the remover of obstacles. He is also popularly known as Ganapati. Gan means group. A universe is a group of atoms and different energies.

This universe would be in chaos if there was no supreme law governing these diverse groups of entities. The Lord of all these groups of atoms and energies is Ganesha. He is the supreme consciousness that pervades all and brings order in this universe.

Lord Ganesh, in some way, also symbolizes intelligence in the body. According to Hindu dharma, he represents Mahat, the highest form of Prakriti in the process of creation. In modern parlance, intelligence represents the higher mind and is crucial for reasoning and discernment. “Ganapati is the lord of universal intelligence (mahat-tattva),” says Bhagavata Tattva. 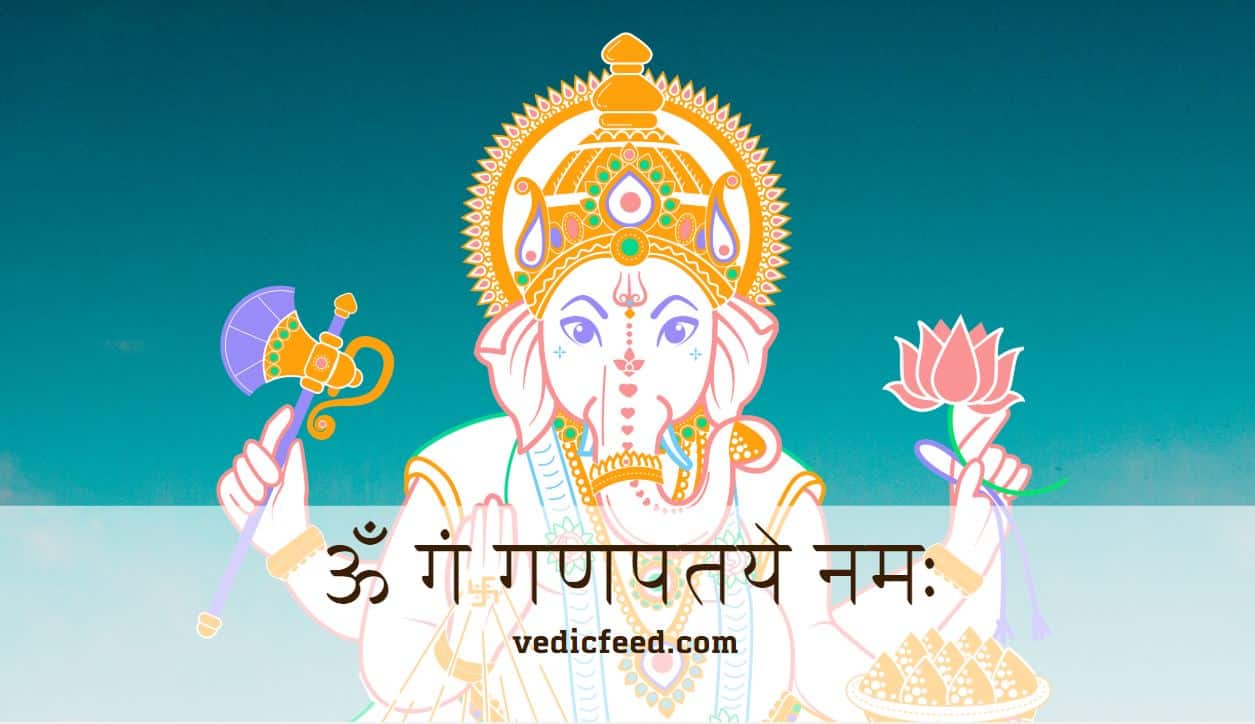 Ganesh Chaturthi or Vināyaka chaturthī and Ganesh Jayanti (Lord Ganesha’s birthday) are celebrated in August or September and January or February respectively in honor of the elephant-headed God – Ganapati. The head of the Lord Ganesha symbolizes the Atman or the soul, which is considered the ultimate reality of humanity, and his human body symbolizes Maya, the trappings of earthly existence.

Lord Ganesha is the lord of knowledge, success, and fulfillment. Several mantras can be chanted to invoke Ganapati. These Mantras are also known as Siddhi Mantra – the one with perfection. Ganesh Mantras are full of energy and the power of Lord Ganesha. Reciting with genuine devotion, these mantras can give you positive results removing obstacles.

Below is the list of 15 Powerful Ganesha Mantras to remove obstacles and achieve success with the meaning and benefits of each mantra.

Meaning: “Oh god with a curved trunk, the large body whose aura is like a light of many suns, Please make my entire work obstacle-free, forever.”

Benefits: Chanting this Ganesh mantra will help remove every obstacle between one and one’s well-being and helps to achieve wealth, wisdom, good luck, prosperity, and success in all endeavors. 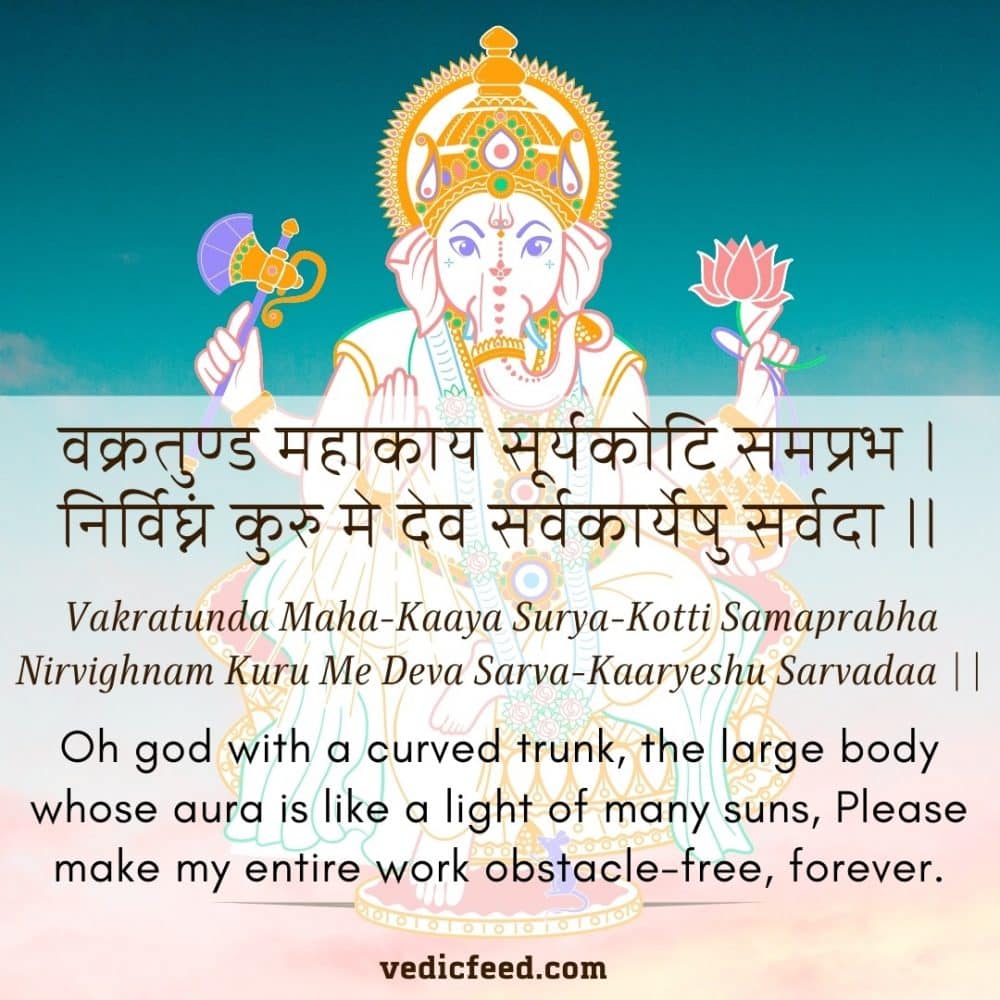 Ekadanta referring to one tusk in the elephant face means that God broke the duality and made us have a complete one-pointed mind.

Benefit: This Ganesh Mantra encourages modesty, righteousness, and high-end wisdom in those who chant it.

Meaning: It means bowing down to Ganapati with all our existence and accepting all his great qualities in our self-being.

Benefit: It wards off all the negativities from one’s life before beginning any work. Chanting of this mantra ensures success in all the new ventures that one wishes to undertake. 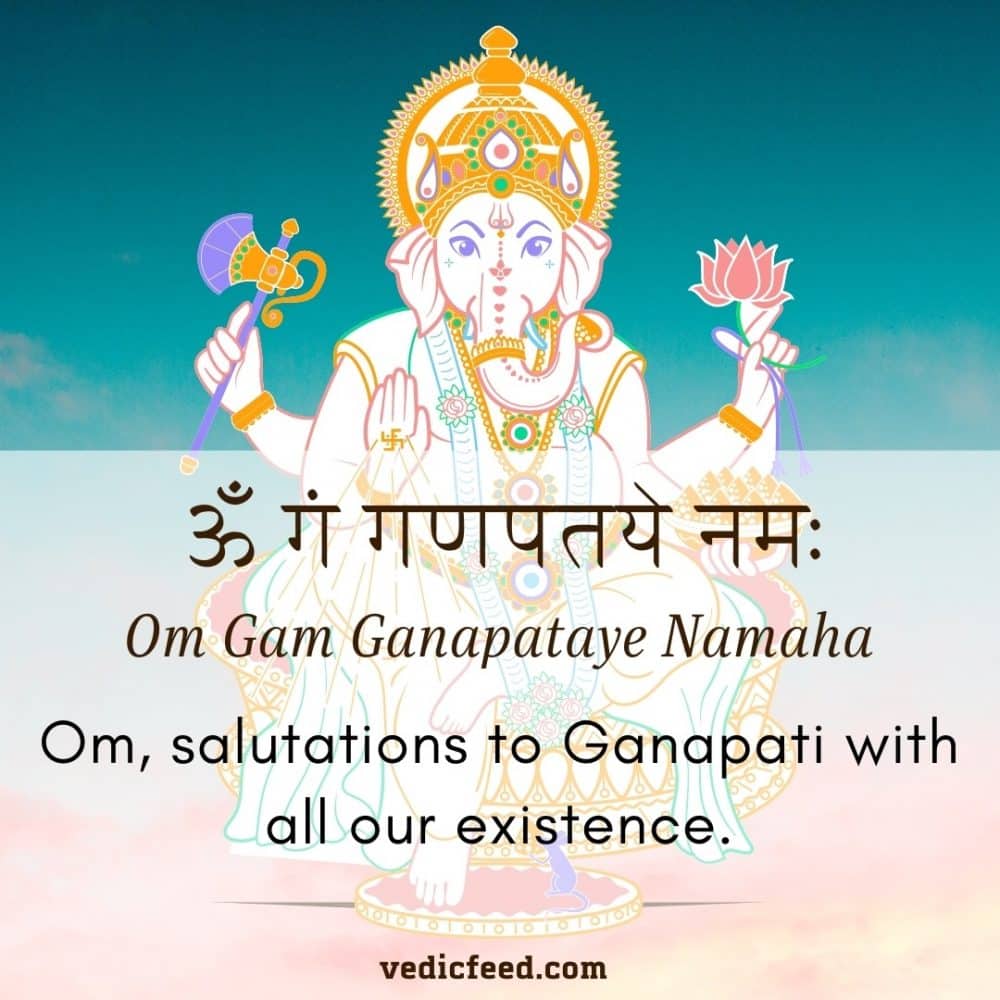 Lord Ganesha is known by his many names. All his names signify the meaning or qualities associated with him.

Meaning: Ganadhyaksay – Gana means ‘a group,’ and ‘Adhyaksh’ means ‘one who is the leader of the group.’

Benefit: One can use this Mantra to ensure the well-being of a particular state or a city. One can even chant this Mantra to improve or build upon one’s personal leadership characteristics.

Meaning: Gajanan here means One who carries the elephant head. In Sanskrit, gaj means elephant. This Mantra says that if God can carry the elephant’s head to survive and fulfill his duties, even we should put aside our ego and live our lives dutifully.

Benefit: This Mantra motivates such humble living, and chanting helps one attain inner peace and consciousness.

Benefit: If one is facing problems with his social life, at work, or with interpersonal relationships, it can be made easier by chanting this mantra.

Meaning: Ganesha is known to love his food and has a big, round belly. ‘Lambodar’ thus refers to him as a God who has a big belly.

Benefit: Chanting this mantra allows an individual to love and be one with the whole universe, just like Lord Ganpati.

Meaning: Sumukh means ‘One with a pleasing face.’ Lord Ganesha lost his head and replaced it with that of an elephant’s head. However, his good spirit and pure soul shone through even on his elephant face, making him look beautiful and calm.

Benefit: This Mantra allows one to look past one’s shortcomings, identify and improve upon one’s inner beauty.

Meaning: Gaj means Elephant, and Karnikay means ears. With the elephant’s head and elephant ears, Ganesh was unable to listen to everything from all sources.

Benefit: This Mantra allows us to be just like him and hear and accept only good things. Chanting the mantra shields us from external negativity and helps us overcome the stress caused by it.

Benefit: The world is full of difficult situations, and often one may find himself disheartened and unable to focus. This Mantra reminds him that his ultimate goal is salvation, and no matter what happens, he should not lose sight of it. This Ganpati Mantra will keep his eyes on this long-term goal and motivate him towards salvation.

Meaning: ‘Vinayaka’ is the name of Ganesha in the golden age. Vinayaka means ‘something under control’ and also means ‘the Lord of resolving problems.

Benefit: So, by realizing this mantra, one’s life will have a golden age. In one’s office and his work, he’ll be the boss.

Meaning: ‘Rinn Harta’ is another name for Lord Ganesha, and the English meaning is ‘The giver of wealth.’ In Hindi, the meaning of Rinn harta or Rhinaharta is derived from the words ‘Rinn’ or ‘Rinnam’ meaning ‘debt’ and ‘harta’ meaning ‘remover.’

Benefits: The Rinn Harta mantra or the Rhinaharta mantra is the Lord Ganesh mantra for wealth and prosperity in life. Lord Ganesha is requested to keep debts and poverty away and bring abundance to life.

The Siddhi Vinayak mantra is also one of the most important Ganesh mantras.

Meaning: The word ‘Siddhi Vinayak’ means ‘the God of Achievement and Enlightenment.’ The Mantra in English, therefore, means – “O Lord of Wisdom and Happiness, only you make every endeavor and everything possible; You are the remover of all obstacles, and you have enchanted every being in the Universe, you are the Lord of all women and all men, amen.”

Benefit: The Shaktivinayak Ganesh mantra is incanted for financial success and prosperity. It is a powerful mantra for good health and good luck. This mantra is typically recommended to be repeated 108 times correctly.

The Ganesha Mool Mantra is also known as the Ganesh Beej mantra or the Bija mantra. ‘Beej’ means seed – the source of everything in the universe. This powerful mantra combines several Ganpati Beeja mantras, especially the beeja or the seed sonic vibration associated with Lord Ganpati –‘Gam.’

Meaning: The Ganesh Mool mantra is the most succinct and powerful Lord Ganesha mantra of all. This mantra celebrates the unique and divine form of God Ganpati (Ganesha) and his powers. The Ganesha Mool (root) Mantra, beginning with the incantation of ‘Om,’ evokes positivity, purity, energy, and the presence of Lord Ganpati in one’s life.

Benefit: The Ganesh Mool Mantra is believed to create a powerful aura around one’s body because of the cosmic energy in the sound vibrations of the Sanskrit words. This mantra is uniquely musical and lifts the mind to a state of trance. It is widely chanted during Pujas and Yagyas to please Lord Ganesha. It brings peace, good luck, success and removes all obstacles from one’s life if incanted properly.

To bring success, wealth, good luck, and peace by chanting Ganesh Mantra, you should keep certain things in mind before you begin the incantation of the powerful Ganesha mantras.

You should dedicate your Inner Self to Lord Ganesha and chant these mantras.

8 Interesting Facts About Lord Ganesha You May Not Know

8 Avatars Of Lord Ganesha To Destroy The Evil