Sri Vishnu is a supreme god along with the trinity of Brahma and Shiva in Hindu Circa. There exist numerous, texts, hymns, stories, festivals on him and his avatars. The fables from his ten avatar stories to his descriptions in Puranas have glorified Lord Vishnu, also known as Lord Narayana to the status of superior god after the one supreme god.

Chanting Vishnu mantras can be of immense help to any person. Here is a list of Powerful Vishnu Mantras and prayers or chants that can be beneficial to everyone. 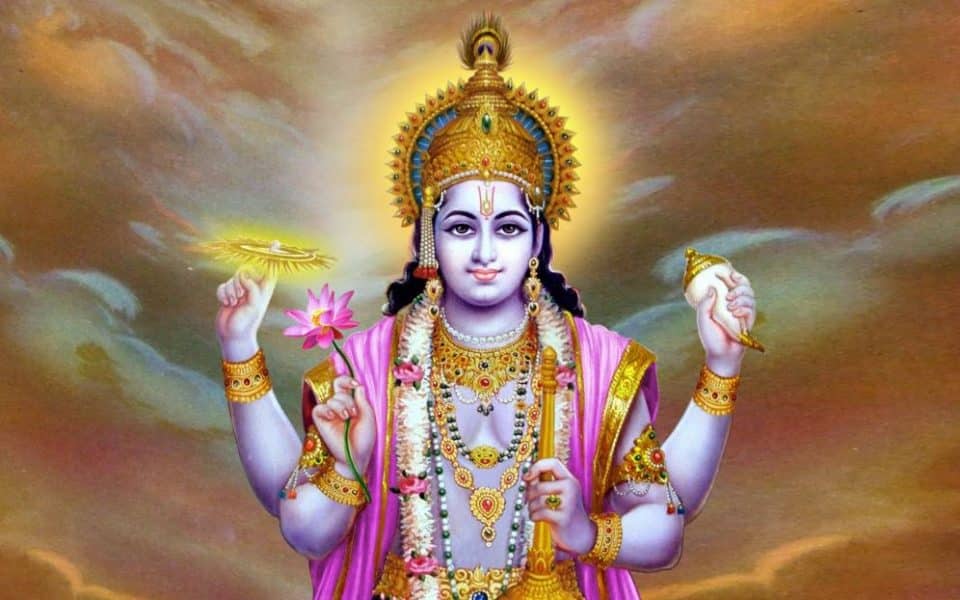 The translation of this Vishnu mantra means, “I bow to the Lord who resides in the hearts of everyone”. This mantra helps to develop compassion because it reminds of the presence of godly being in every being. The emotions of love that arise from chanting this mantra help remove obstacles from one’s life.

The mantra translates to, “I bow to Lord Vishnu who preserves and protects the universe, who is pacific, who lies on the divine serpent, from whose navel arises the Lotus with the power of creation, who is the Supreme Being, who holds the entire universe, who is all-pervading as the sky, who is dark like clouds and has a magnificent form. Lakshmi’s lord, one with lotus eye, who is perceived through meditation by the Yogis, I salute you, Lord Vishnu, who removes the fear of worldly existence and who is the Lord of all worlds”. If one regularly chants this mantra he becomes fearless as this mantra is dedicated to bringing one out of unreal worldly affairs and its fears.

It is beneficial to chant this mantra when one is in a problem or needs guidance. The sages believed, recitation of this particular mantra helps an individual gain concentration and Lord Vishnu guides them throughout every sector in life. The translation of this mantra reads, “O Lord you are my father and mother, you are also my friend and brother, your wealth and education itself, I see my hopes and Salvation in you”.

The mantra is a salutation to Lord Vishnu, it means, “I bow before Almighty”. The mantra is believed to take one to Vaikuntha to spend his blissful afterlife. However, Vaikuntha means the state of being desireless, one can become the desire and free him/herself from materialistic attachment and fear from the use of this mantra.

This shloka is found in Bhagavad Gita and Mukundamala, its brilliance may be the reason for its use in numerous texts. The version in Mukundamala differs a little from one in Bhagavad, the mantra above is from Mukundamala. The mantra means, “Whatever I do with my Body, Speech, Mind or Sense Organs, Whatever I do use my Intellect, Feelings of Heart or unconsciously through the natural tendencies of my Mind, Whatever I do, I do all for others, I Surrender them all at the Lotus Feet of Sri Narayana”. The use of this mantra liberates one from karmic deeds performed by an individual consciously or unconsciously and takes one to enlightenment. Its regular chant can make people stress free and remove guilt from their hearts.

This Vishnu mantra is found in numerous Puranas and one of the main mantras on Vishnu. The translation of mantra states, Om, if one is Apavitra (Impure) or Pavitra (Pure), or even in all other conditions, one who remembers Pundarikaksha (Vishnu), shall be Pure outwardly as well as inwardly. The main aim of this mantra is to salvate one from sins; while sin and dharma are subject to judgments of society, the mantra is free people from bondage and liberate them from emotional connections that cause pain in one’s life.

This Vishnu mantra means, “Om, Let me meditate on Lord Vishnu, Oh, Lord Vasudeva, give me higher intellect, And let Lord Vishnu illuminate my mind”. The Vishnu Gayatri Mantra like every other Gayatri Mantra has an effect of removing fear and bringing one to reality.

The English translation of this mantra is,” Salutations to Sri Vishnu Who is holding the conch and chakra, and who is adorned with diadem and earrings; with Yellow Garments and lotus-like eyes. Whose Chest is adorned with a Garland with the Kaustubha Gem; Four-Armed Form of Sri Vishnu and Bow my Head before him”. The Bhakti or devotion is key to self-awareness; the regular chant of this mantra helps develop quick reflexes through increased concentration.

In simple words, this mantra states, “We salute Lord Vishnu, Who is Beautiful like the Dark Clouds, and Who is wearing Yellow Garments of Silk; Who has the mark of Srivatsa on His Chest; and Whose Body is Shining with the Radiance of the Kaushtubha Mani, Whose Form is permeated with Holiness, and Whose Beautiful Eyes are extended like the Lotus Petals; We Salute Sri Vishnu Who is the One Lord of all the Lokas”. This is again a Vishnu mantra as a prayer dedicated to Lord Vishnu, which the devotees can make use of in Poojas or worship of Lord Vishnu.