India is known for its rich heritage as the Indian subcontinent is the birthplace of four of the world’s major religions – Hindu Religion, Buddhism, Jainism, and Sikhism. It is no surprise that the country is home to some of the oldest and most historic temples in the world. The history is scattered all across India; the history includes some really old Hindu temples with the most exquisite carvings, architectures, and styles that are intrinsic to India.

These 1000 years old temples in India take you back in time to an era when life was simpler, whether the architecture of the temples or art involved in the sculptures and carvings on the walls, everything about these wonderful structures is majestic.

Here are ten temples in India that are more than 1000 years old yet still relatively unknown.

Kailasa Temple is one of the largest rock-cut temples in India. Maharashtra Historical evidence suggests that this temple was built in the 8th Century AD. It is located in Maharashtra’s Ellora caves and is a delight for history buffs. It is said to have been carved out of one rock and shows traces of Pallava architecture.

The Kailasanatha temple (Cave 16) is one of the 32 cave temples and monasteries are known collectively as the Ellora Caves. The Kailasa temple lacks a dedicatory inscription, but there is no doubt that a Rashtrakuta ruler commissioned it. The primary deity of the ancient temple is Kailashanatha (Shiva). There are five separate shrines in the temple premises; three are dedicated to the river goddesses: Ganga, Yamuna, and Saraswati. 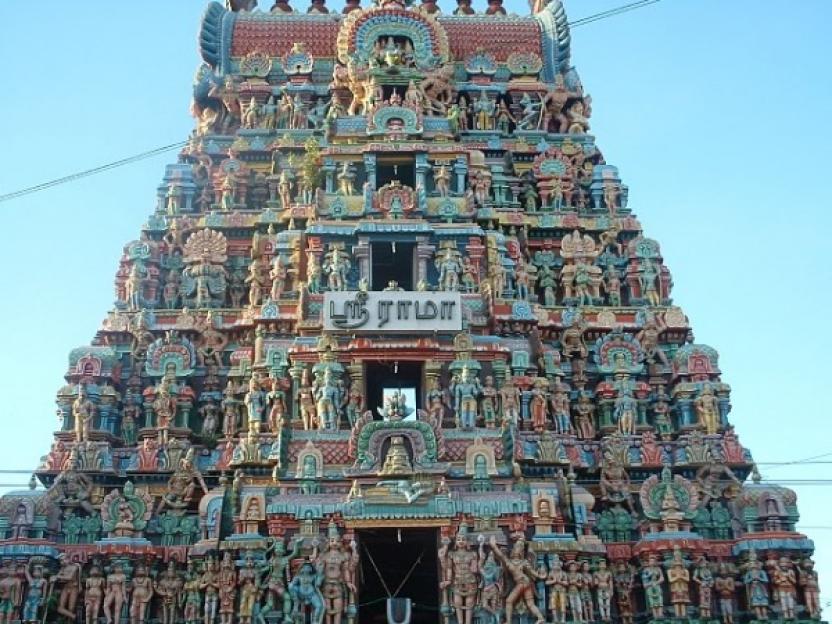 This 1000-year-old temple is a temple dedicated to Lord Shiva. It is located in Kumbakonam, Tamil Nadu, and was built by the Chola Dynasty. It was initially constructed in the 9th century; it now covers a vast area of 30,181 sq. ft. Later expansions are attributed to Vijayanagar rulers of the Thanjavur Nayaks of the 16th century. The Adi Kumbeswarar temple is worth a visit as it is one of the finest temples of south India.

Shiva is worshiped as Adi Kumbeswarar and is represented by the Lingam. His consort Parvati is depicted as Mangalambigai Amman. The presiding deity is revered in the 7th century Tamil Saiva canonical work, the Tevaram, written by Tamil saint poets known as the Nayanmars and classified as Paadal Petra Sthalam.

This temple at Mahabalipuram, Tamil Nadu, is called so because it faces the Bay of Bengal. One of the oldest structural temples in South India, this temple was constructed sometime around 700 A.D. during the reign of the Pallava king Narasimhavarman II. Shore temple is a complex of three temples, one large and two small.

As the Shore Temple was initially identified as part of the Seven Pagodas at Mahabalipuram, an ancient Hindu legend referred to the origin of these pagodas in mythical terms.

Prince Hiranyakasipu refused to worship the god Vishnu. The prince’s son, Prahlada, loved and was devoted to Vishnu greatly and criticized his father’s lack of faith. Hiranyakasipu banished Prahlada but then relented and allowed him to come home. Father and son quickly began to argue about Vishnu’s nature. When Prahlada stated that Vishnu was present everywhere, including in the walls of their home, his father kicked a pillar. Vishnu emerged from the pillar in the form of Narasimha, One with a lion’s head, and killed Hiranyakasipu. Prahlada eventually became the king and had a grandson named Bali. Bali founded Mahabalipuram on this site.

Badami, formerly known as Vatapi, is a town and headquarters of a taluk by the same name in the Bagalkot district of Karnataka, India. It was the regal capital of the Badami Chalukyas from 540 to 757 AD. As all the great kingdoms go on with their view of building wonderful sanctuaries to be remembered in history, the Chalukyas built the exquisite Badami Cave Temples.

The temples are said to be built around the late 6th-7th century AD, after the initiation by the first ruler of the Early Chalukya dynasty, Pukalesi I. He built a new capital for his kingdom around 540 AD. Badami is believed to be one of the oldest places of human settlement.

Badami Cave Temples is a prestige of Badami town. A complex system of rock-cut shrines, the cave temples at Badami, Karnataka, represent some of the earliest known examples of Hindu temples. The artisans carved them out under the Chalukya rule in the 6th Century A.D. The Hindu, Jain, and Buddhist cave temples are worth witnessing for anyone interested in history and archaeology. 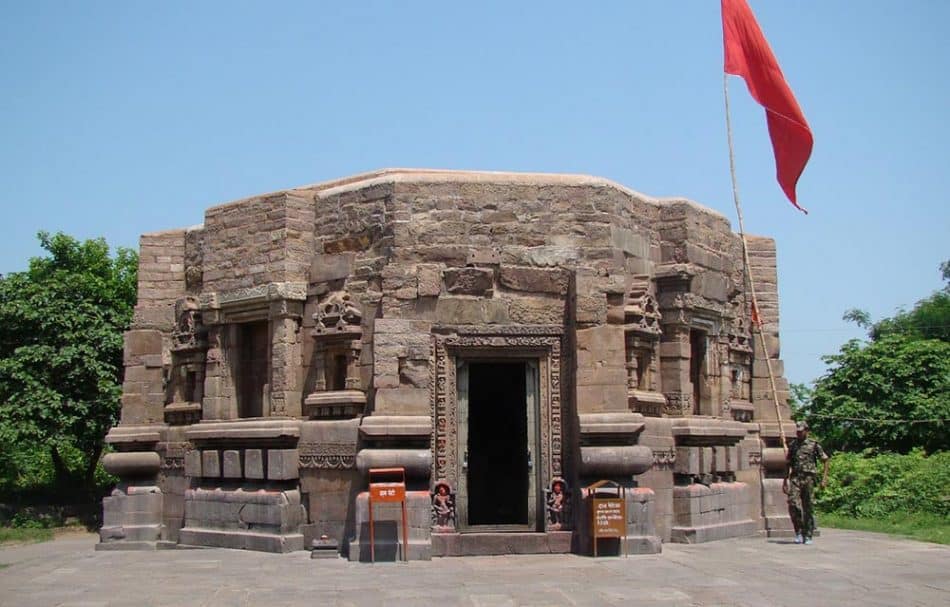 The Mundeshwari Devi Temple (also spelled as Mundesvari) is located at Kaura in Kaimur district in Bihar, India, on the Mundeshwari Hills. This is one of the oldest temples in India and is dedicated to Lord Shiva and his consort Parvati. Archaeological Survey of India dates it to 108 A.D. It is also considered to be the oldest functional temple in the world.

The inscription of an information plaque erected by the Archaeological Survey of India (ASI) indicates the temple’s dating to 108 AD. However, there are other versions for the dating stating the Saka era, before the Gupta dynasty rule (320 AD) in India, and specifically to 105 AD according to the Administrator of the Bihar Religious Trust Board. The temple, a protected monument under ASI since 1915.

The temple, built of stone, is on an octagonal plan which is rare. It is the earliest specimen of the Nagara style of temple architecture in Bihar. There are doors or windows on four sides and small niches for the reception of statues in the remaining four walls. The temple shikhara or tower has been destroyed. However, a roof has been built as part of renovation work. The interior walls have niches and bold moldings, which are carved with vase and foliage designs.

At the entrance to the temple, the door jambs are seen with carved images of Dvarapalas, Ganga, Yamuna, and many other murtis. The main deities in the sanctum sanctorum of the temple are of the Devi Mundeshwari and Chaturmukh (four-faced) Shiva Linga. There are also two stone vessels of unusual design. Even though the Shiva linga is installed in the center of the sanctum, the main presiding deity is Devi Mundeshwari, deified inside a niche, which is seen with ten hands holding symbols riding a buffalo, attributed to Mahishasuramardini.

Part of the historic temple ruins in Aihole, the Lad Khan temple is believed to be the oldest temple in Aihole. It is located at Bagalkot, Aihole, in the state of Karnataka, India. It was constructed by the Chalukyas around the 5th century AD. Today, it is part of a historic temple complex which makes for an excellent excursion. It is called Lad Khan temple because it was used as a residence by a person named Lad Khan for a period.

Originally dedicated to Vishnu, now the main shrine houses a Shiva Linga with a Nandi. The temple was built in a Panchayatana style, indicating a very early experiment in temple construction. The special feature of this temple is that it starts with a rectangular structure and ends with a square structure. Based on a wooden construction design, the square and rectangular plan have a steep roof, which is an adaptation of wooden styles in stone.

Another beautiful temple located in Aihole, the Durga temples, is another gem from the Chalukya dynasty and was built by the Chalukyas in the 7th or 8th Centuries. While Durga is a popular Hindu deity, in this case, it stands for “protector” as the temple is dedicated to Vishnu and Shiva. The Durga temple is a medieval era Hindu temple, also a part of a pending UNESCO world heritage site. This temple is located at Bagalkot, Aihole, in the state of Karnataka, India.

In Indian traditional architecture, this temple shape is known as Gajaprasta, which means the resemblance to the back of an elephant. The temple’s unusual apsidal form is thought to imitate the earlier Buddhist chaitya halls. Later studies established that apsidal design in Indian architecture is pan-Indian tradition, which existed before Buddhist architecture. 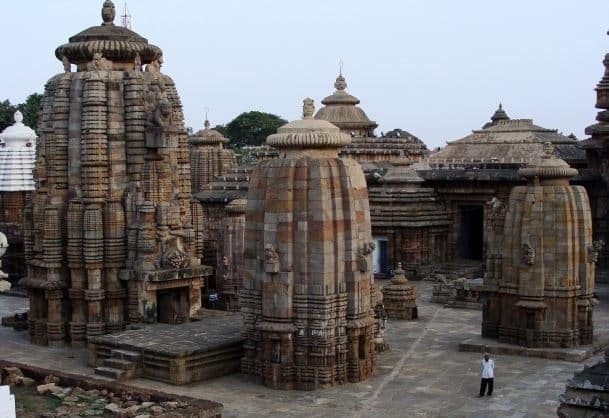 Dedicated to Lord Shiva, it is one of the oldest and largest temples in Bhubaneshwar, Odisha. An icon of Kalinga Architecture, this temple is said to have been built in the 6th Century A.D., with later additions being made in the 11th Century A.D. The central tower of the temple is 180 ft (55 m) tall. The Lingaraja temple is the largest in Bhubaneswar.

Lingaraj means the king of Lingam, the iconic form of Shiva. Shiva was originally worshipped as Kirtivasa and later as Harihara and is commonly referred to as Tribhuvaneshwara (also called Bhubaneswar), the master of three worlds, namely, heaven, earth, and the netherworld. His consort is called Bhuvaneshvari.

Its Kalinga style of architecture is renowned across the globe and culminates the medieval stages of the architectural tradition at Bhubaneswar. It makes it a must-visit for architecture and history buffs. The temple is believed to be built by the kings of the Somavamsi dynasty, with later additions from the Ganga rulers. The temple complex has 50 other shrines and is enclosed by a large compound wall.

Located in the foothills of the Nandi Hills of Karnataka, Bhoga Nandeeshwara temple is dedicated to Lord Shiva. It is located 60km from Bangalore and is under the protection of the Archaeological Survey of India as a monument of national importance. While Nandi Hills is a pretty popular tourist site, not many people know about the Bhoga Nandeeshwara.

The temple is more than 1000 years old, going back to the 9th century, and is the rendition of five different dynasties that ruled the area of Nandi Hills. However, one can see Dravidian Architecture dominating the most in the entire temple.

Originally, Bana Queen Ratnavali is believed to have constructed the temple at first and then added and extended layers by layers during the Ganga dynasty, Cholas, Hoysalas, Pallavas, Vijayanagara kings consecutively. The Banas created the original temple; then, the Chola kings added the roof during the 11th century. During the Hoysala dynasty, the marriage hall to the temple structure was added. Then finally, it was the Vijayanagar kings who added the outer wall and buildings during the 13th century. 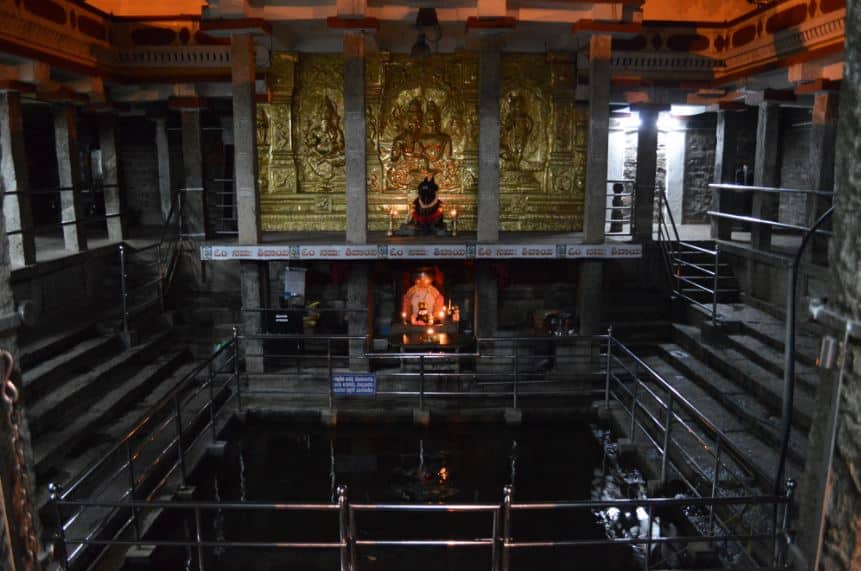 The local priest says, “A few years ago, a politician tried to sell this plot. But the people objected; they demanded that the land should be dug first to see if they could find something.” Surprisingly, they found the temple completely buried under the flat land. More surprisingly, the temple was preserved by the thick soil layers and was still in perfect condition.

A stone-cut courtyard supported by ancient stone pillars had enclosed the temple and kept it protected. There is a black stone carving of Nandi with golden eyes at the far end of the courtyard, and from its mouth, a clear stream of water flowed toward Shivalinga at the lower level. One could also see the steps that led to the pool at the center, with a 15ft deep whirlpool.

Things haven’t changed a bit as it seems, though, and nobody can pinpoint where the origin of that water is and how the water passes from the mouth of Nandi to the Shivalinga. To add, nobody even knows how the whirlpool came into being. Everything is still a mystery. 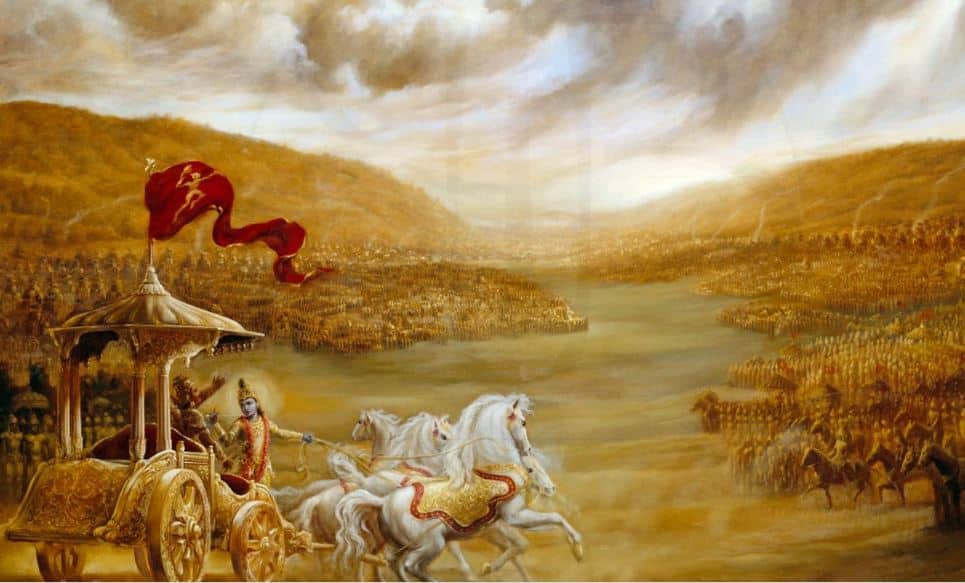 12 Jyotirlinga Temples of Lord Shiva You Should Visit