Rahu and Ketu are considered as two strong planets as per the principles of Vedic Astrology, although, astronomically, they do not exist. Rahu and Ketu denote the two points of intersection of the paths of the Sun and the Moon as they move around the celestial sphere. Therefore, Rahu and Ketu are respectively called the North and the South Lunar nodes. (The story behind Rahu and Ketu and their significance)

In Vedic Astrology, Ketu is considered to be a half planet, the south or descending node of the Moon. It is invisible and is just a point in the cosmic arrangement. Ketu helps people incline towards a spiritual lifestyle and is considered to be the reason for liberation or Moksha. It is also a malefic planet, it bestows the natives with various mishappenings in life, with the intention to help us reach emancipation.

Effects of Ketu in Different Houses

The person with Ketu in the first house will be rich and laborious but will always be concerned about his/her family. Ketu is generally considered auspicious or benefic for native’s family relation when in the First House. However, when in the 1st house, Ketu is malefic, you may suffer from headaches. If Ketu in 1st house is malefic, the native’s spouse and children would have health problems.

The second house is ruled by Moon, which is considered as an enemy of Ketu. If Ketu in 2nd house is benefic then one gets rewards or gifts from parents. One has the opportunity to travel to many different places and his travels are fruitful.

Venus gives good results, irrespective of its position. Moon would give bad results. If Sun is in 12th house then one starts earning his livelihood after twenty-four years and is happy. If Jupiter is exalted along with Ketu in 2nd house, more financial gain.

If Ketu in the second house is malefic, then one may not get a good travel experience. If there is Moon or Mars in 8th house then native’s life would be short and he would have a serious health problem at an early age. If 8th house is empty then Ketu would give malefic results.

The third house is affected by Mercury and Mars, both don’t go well with Ketu. If Ketu in 3rd house is benefic, it is good for your children. If Ketu is in 3rd house and Mars is in 12th then the native has a child at an early age (20s). The native with Ketu in 3rd generally travel because of the job/work rather than for a recreational purpose.

If Ketu in 3rd house is malefic then native loses money in litigation. He gets separated from his family member. He will have troubles from his brothers and will have to travel uselessly.

The fourth house in the planet belongs to Moon. If Ketu is benefic in 4th house then the native is lucky for his father and Guru. Such a native leaves all his decisions to God. If Moon is in 3rd or 4th house the result is benefic. Native with Ketu in the fourth house is a good adviser and financially strong.

If Ketu is malefic in the fourth house then the native can have a health issue, this can make him unhappy. One may suffer from diabetes.

The fifth house in a planet belongs to Sun and is also affected by Jupiter. Your financial condition will be excellent if Jupiter, Sun or Moon is in 4th, 6th or 12th house. Ketu becomes benefic by itself after 24 years of age.

If Ketu in 5th house is malefic then the native suffers from some health problems. Ketu gives malefic results until five years of age.

The 6th house belongs to planet Mercury. Ketu in 6th house is considered debilitated. The effect of Ketu depends upon the nature of Jupiter. It gives good result regarding children. The native with Ketu in Sixth house is a good adviser. If Jupiter is benefic then the native has a long life and his family life is peaceful. If any two of the planet, Sun, Jupiter, Mars are in a good position then Ketu is benefic.

If Ketu is malefic in 6th house then maternal family suffers. The native has to suffer due to useless travels. People will misunderstand the native. If Moon is in 2nd house then mother suffers and even the native’s old age is troubled.

7th house of the chart belongs to Mercury and Venus. If Ketu is in the seventh house is benefic then the native will have financial gain in early age. If one has the help of Mercury, Jupiter or Venus then the native is never disappointed.

If Ketu in 7th house is malefic then the native is usually ill, makes false promises and is troubled by enemies till his 30s. If there is more than one planet in Lagna then it will affect children negatively. If Ketu is with Mercury then after thirty-four years of age the native’s enemies are destroyed by themselves.

The eight houses of the birth chart belong to Mars, which is an enemy of Ketu. If Ketu in 8th house is benefic then the native new member of the family will be born. If Jupiter or Mars are not in 6th and 12th house then Ketu does not give malefic results. A similar effect is there when Moon is in 2nd house.

If Ketu in eight houses is malefic then the native’s partner will have some health issue. Saturn or Mars in 7th is not considered lucky.

The 9th house belongs to Jupiter, which favors Ketu. Ketu in 9th house is considered to be very powerful. People with Ketu in night house is obedient, lucky and wealthy. If Moon is auspicious then the native helps his maternal family.

If Ketu in 9th house is malefic then the native suffers from urinary problems, pain in the back, the problem in legs.

The 10th house belongs to Saturn or Sani. The effect of Ketu here depends upon the nature of Saturn. If Ketu is benefic here then the native can be extremely lucky but an opportunist. If Saturn is in the sixth house then one can be a famous personality.

Recommended -  7 Significance of Kundali Milan - Why it is Absolutely Necessary!

If Ketu in 10th house is malefic then one may suffer from urinary, hearing problems and pain in bones. The family life is full of worries and troubled if Saturn is in 4th house.

Ketu in Eleventh house is considered very good. This house is affected by Jupiter and Saturn. If Ketu is benefic here and Saturn is in 3rd house, it gives enormous wealth. Native with Ketu in the eleventh house is generally self-made businessman or entrepreneur. If Mercury is in 3rd it leads to Raj Yoga.

If Ketu is malefic here then the native has a problem in his digestion system and stomach area. The more he worries about the future, the more troubled he gets into.

Ketu in the twelfth house is considered to be exalted. The native with Ketu in 12th house is wealthy, achieves a very successful position. They are also good at social works and community contributions. If Rahu is in the 6th house, along with Mercury, then the effect is even better. One has all the benefits and luxuries of life.

If Ketu in 12th house is malefic then one may make wrong decisions while acquiring lands and house. If 2nd house has Moon, Venus or Mars, Ketu gives malefic results.

Traits and Characteristics of Pisces – The Meena Rashi

The story behind Rahu and Ketu and their significance

7 Significance of Kundali Milan – Why it is Absolutely Necessary! 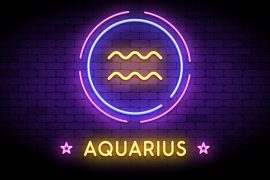 Traits and Characteristics of Aquarius – The Kumbha Rashi